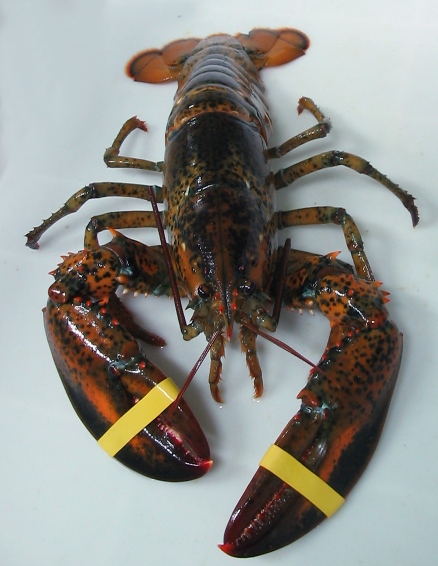 The American lobster, Homarus americanus, is native to the Northwest Atlantic, from the Strait of Belle Isle, Newfoundland to south of Cape Hatteras, North Carolina. It is a widely esteemed seafood item, shipped alive around the world. In spite of numerous attempts at stocking introduced populations, it has not become established outside its native range. However, its occasional occurrence in northern European waters has caused concern because of possible hybridization, competition, or disease transfer with the native European Lobster (Homarus gammarus).

Homarus americanus is native to the Northwest Atlantic, from the Strait of Belle Isle, Newfoundland to south of Cape Hatteras, North Carolina (Williams 1984). In the Chesapeake Bay region, H. americanus occurs in Atlantic waters of the continental shelf adjacent to the mouth of the Bay (Musick and MacEachran 1972; Van Engel and Sandifer 1972). Occasional occurrences in the Carolinas south of Cape Hatteras may be due to larvae transported around the Cape by nearshore currents (Williams and Williams 1981). The American Lobster has become a widely esteemed seafood item, now shipped alive around the world. Attempts were made to introduce it to the West Coast of North America in the 19th and 20th centuries (Carlton 1979), and to Japan in the 1980s (Kittaka et al. 1983). These attempts were all unsuccessful, and no established introduced populations are known. Recent occurrences in northern European waters are probably the result of discarded, escaped, or deliberately released live animals (Jørstad et al. 2007).

Numerous attempts were made to introduce H. americanus to the Pacific coast of the US and Canada (Carlton 1979). In 1874, the US Fish Commission sent a shipment of lobsters cross-country by rail, with poor survival. Two lobsters were released in the Great Salt Lake, Utah, and four were planted in San Francisco Bay at Oakland (Smith 1895). In 1879, 22 live female lobsters, bearing eggs, were released outside the Golden Gate. In 1888, 162 lobsters were released a mile off Pacific Grove, Monterey Bay, and 95 more were stocked at Point Lobos, near Carmel. Forty-three lobsters escaped from a holding box in Monterey Bay, and the remaining 30 were planted off Trinidad, northern California. In 1889, 234 lobsters were released on the northwest coast, off the mouth of the Columbia River, Willapa Bay, Grays Harbor, and Puget Sound (Smith 1895). In British Columbia, the attempts at introduction were more extensive and persistent, beginning in 1896 and continuing until 1967 (Carl and Giguet 1972; Carlton 1979). In some of the later releases, done by the Canadian Fisheries Research Board, thousands of lobsters were released at a time, and careful consideration was made to pick sites that would be most favorable to retention and development of larvae. A few individuals were caught years after release, and few early larvae were found in the plankton, but no populations were established (Carl and Giguet 1972; Calrton 1979). As late as 1983, Canadian scientists were contemplating the possibility of more lobster introductions (Barber 1983). There have been at least two recent sightings by divers in British Columbia (Klinkenberg 2010). These sightings and other West Coast occurrences are probably due to discarded seafood or animals 'rescued' from markets and released.

One early attempt was made to introduce American Lobsters to southern US waters in 1814, in Charleston, South Carolina, when a box of live lobsters was released- a few were found ten years later, but reproduction is unlikely (DeKay 1844, cited by Carlton 2011). Spencer F. Baird, U.S. Commissioner of Fisheries, believed that the range of H. americanus could be extended southward by acclimatizing eggs to warmer waters. In 1884, 63 live lobsters, some bearing eggs, were transplanted to Back River Light, Norfolk, Virginia (Baird 1887). In 1885, 100 more were transplanted 'to the ripraps in Chesapeake Bay' (Baird 1887).

In 1893, a shipment of 745 H. americanus, including 37 with developing eggs, was sent by ship to Galveston, Texas. The lobsters all died before reaching their destination, but the eggs were planted in offshore waters (Baird 1893). A 1981 record of a lobster washed up on the beach, at Naples, Florida, was probably a discarded seafood animal (USNM 183787, US National Museum of Natural History 2007).

In Japan, attempts were made to establish H. americanus as early as 1914 (Iwasaki 2006). A more recent attempt was made in 1982 to test whether they could establish in the wild or were able to be reared in sea cages. In the Koshiki Islands, in southern Japan, in the East China Sea, 97 one-year old lobsters were released on an area of sea bottom on which concrete shelters had been placed. Survival was 3% over 11 days, due mostly to fish predation (Kittaka et al. 1983). In a second experiment, 3-week old lobsters were reared in sea cages, with 25% survival over nine days (Kittaka et al. 1983). American Lobsters have not become established in Japan (Iwasaki 2006).

Homarus americanus has massive claws on the chelipeds, and smaller claws on the 2nd and 3rd pairs of walking legs (Gosner 1978; Williams 1984). Juveniles might be confused with mud shrimp such as Upogebia spp. and Calianassa spp., but the latter are burrowers in soft sediment, and have claws only on the 1st and 2nd pairs of legs (Gosner 1978). Adult H. americanus can exceed 900 mm and 20 kg (Gosner 1978). The color is highly variable, but usually dark bluish green to brownish olive, with greenish black spots, and areas of orange on the claws, frontal and ventral regions (Gosner 1978; Holthuis 1991; Jorstad et al. 2007). The zoea and postlarva of H. americanus are illustrated by Johnson and Allen (2005). Lobster larvae are unusually large among decapods, about 5-6 mm for the 1st zoea, and around 10 mm for the postlarva.

The European lobster (Homarus gammarus) differs in lacking teeth on the underside of the rostrum, and in coloration, usually being bluish-black or white or yellowish ventrally with orange on the claws. Since these features can be variable, genetic testing was used to confirm the presence of H. americanus in Norwegian waters (Jorstad et al. 2007).

Life History- Male and female lobsters pair for about a week before mating. After the male molts and carries the female around, underneath his carapace, the male copulates with her, inserting the first pair of pleopods, carrying a spermatophore, into the female's seminal receptacles. The eggs are fertilized internally, and then extruded 11-13 months after mating and adhere to the pleopods. The eggs hatch into a prelarval stage, and then pass through four zoeal stages before molting into a postlarva and settling (MacKenzie and Moring 1985).

Homarus americanus has become a highly prized food item around the world. In spite of numerous attempts at stocking, it has not become established outside its native range. However, its occasional occurrence in northern European waters has caused concern because of possible hybridization, competition, or disease transfer to the native European Lobster (H. gammarus) (Jørstad et al. 2007; Jørstad et al. 2011).

Holthuis, L. B. (1991) Marine lobsters of the world. An annotated and illustrated catalogue of species of interest to fisheries known to date., FAO Fisheries Synopsis 13(125): 1-292

ICES Advisory Committee on the Marine Environment (2011) <missing title>, International Council for the Exploration of the Seas, Copenhagen. Pp. 1-180