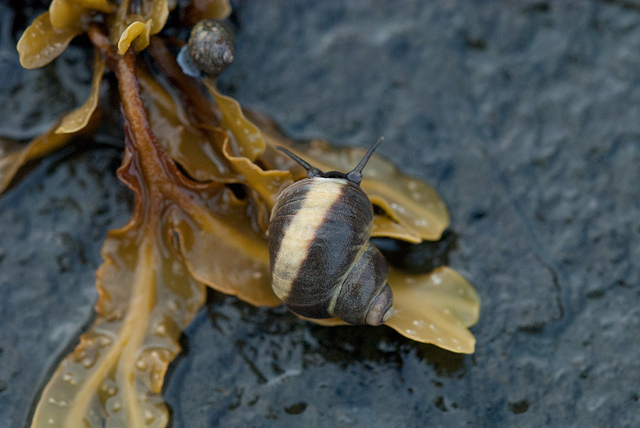 Littorina saxatilis is commonly known as the Rough Periwinkle. It is native to the North Atlantic with a range spanning from the Arctic Ocean to Virginia (in the West Atlantic) and the Iberian Peninsula (in the East Atlantic). Introduced populations are known from California, Italy and Southern Africa. It occurs in a wide range of habitats, spanning from the littoral zone of exposed rocky shores to the shallow subtidal regions of brackish lagoons and marshes. There are no reported ecological or economic impacts of this species in its invaded range, but it has the potential to compete with and displace native snails in California.

Littorina saxatilis has an extensive native distribution in the Atlantic, stretching from the Arctic Ocean (up to 80°N) south to the Mid-Atlantic States (New Jersey-Virginia) and the Iberian Peninsula (Reid 1996). Isolated southern populations in the Azores, Canary Islands, and the Mediterranean Sea (Tunisia) could represent remnants of Pleistocene populations, although fossil evidence is lacking. Natural transport by birds or rafting is also possible. In the Northeast Atlantic, L. saxatilis has colonized the isolated islet of Rockall, between Britain and Iceland (Johannesson 1988). Johannesson (1988) suggests that the ovoviparous life history has adapted this species to colonizing remote sites, since a single fertilized female rafted on driftwood or seaweed, or carried by a ship, can start a population. Alternatively, these southern records could represent early introductions by shipping. On the East coast of North America, the construction of stone jetties and riprap may have favored the extension of L. saxatilis’ range to the Atlantic coast of Virginia, near the mouth of Chesapeake Bay (Counts and Bashore 1991). The type population in Venice Lagoon, Italy, from which the species was first described in 1792, is probably introduced (Panova et al. 2011), as are occurrences in four estuaries on the coasts of South Africa and Namibia (Mead et al. 2011b). The most recent invasion is in San Francisco Bay, where this snail was first collected in 1993 (Carlton and Cohen 1998).

Littorina saxatilis has been introduced to the West Coast of North America, in San Francisco Bay, California. In 1993, this periwinkle was collected in rocky debris along the shore at Emeryville Marina, on central San Francisco Bay, by James T. Carlton (Carlton and Cohen 1998). In 1996, a second population was found at Taney Marina Beach, Coast Guard Island, on the Oakland estuary (Carlton and Cohen 1998). A research group, led by Whitman Miller of the Smithsonian Environmental Research Center, began a series of surveys in 2002 in order to evaluate the possibility of eradication. They found that L. saxatilis was already sufficiently widespread so that eradication was not feasible. Several populations were found on South San Francisco Bay, including one at the Port of Redwood City (Miller et al. 2004) and in Brisbane Lagoon (Cohen et al. 2005). The probable vector for introduction of this periwinkle was imported baitworms (Neanthes virens) wrapped in seaweed (Ascophyllum nodusum) from Maine and Maritime Canada. The seaweed packing material is usually discarded along the shore, and often contains living marine invertebrates, including L. littorea, L. saxatilis, and L. obtusata (Carlton and Cohen 1998; Miller et al. 2004).

Littorina saxatilis was first described from Venice Lagoon, Italy in 1792 (Reid 1996). This population has been considered to be one of several cryptogenic remnant populations in Pleistocene refuges (Reid 1996). However, genetic analysis of Venetian specimens shows low genetic diversity and similarity to British and Scandinavian populations, strongly supporting introduced status (Panova et al. 2011). Other isolated populations, in the Gulf of Gabés, Tunisia and in the Azores and Canary Islands, could be Pleistocene remnants, or natural colonists (Johannesson 1988; Reid 1996), but to our knowledge, have not been studied genetically.

Isolated populations of L. saxatilis occur in South Africa and Namibia. It was first reported in 1963 from Langebaan Lagoon, South Africa (Robinson et al. 2004; Robinson et al. 2005; Mead et al. 2011b). Fossils believed to date to about 40,000 years BP, and postglacial fossils, are known from the vicinity of Cape Town (Johannesson 1988; Reid 1996). However, dates have not been determined by radiological methods. As Mead et al. (2011b) have noted, if the fossil populations had survived to the present, this periwinkle would probably be much more widespread on the South African coast.

Littorina saxatilis is a medium-sized marine snail, with a turban-shaped shell, having a moderately elevated, pointed spire. The shell is dextrally coiled and adult shells have 4-5 convex whorls with well-defined sutures. The sculpture of the shell is variable, but consists of many poorly-defined, or as few as five, more definite spiral ribs. The color is highly variable, from drab-gray to yellow-brown or dark brown, and sometimes white, yellow, orange, red, brown, or black. Some individuals, especially young snails, are banded or spotted with yellow and black. Mature snails can range from 1.2 to 25.8 mm, but are more usually 6-13 mm. Development is direct, with young developing in a brood pouch and emerging as tiny snails, about 0.45 to 0.75 mm. Description from: Abbott 1974; Morris 1975; and Reid 1996.

The taxonomy of this snail is one of the most confused of any mollusk, including 28 synonymous names and 31 varieties, resulting from its high morphological variability (Reid 1996). At least two very similar species, L. arcana and L. compressa, are known from European waters, but have not been reported from North American waters (Reid 1996). The occurrence of numerous ecotypes and divergent populations probably stems from brooding reproduction and the limited dispersal ability of this snail (Reid 1996; Mäkinen et al. 2008; Doellman et al. 2011).

Littorina sitkana
Some erroneous reports of L. saxatilis from the Pacific Ocean have been due to confusion with this northeastern Pacific species (Reid 1996).

Littorina saxatilis occurs mostly on mid-to-upper shore rocky coasts, but is also found in lagoons and marshes, usually on hard substrates. Sexes are separate and fertilization is internal. This snail can mature at sizes as small as 1-2 mm. In a Quebec population, L. saxatilis matured at about 3.2-3.5 mm (Pardo and Johnson 2005). Larval development is ovoviviparous, with the young developing in a brood pouch and emerging at 0.4-0.75 mm, with a shell of 1.6-2.1 whorls. The number of embryos varies with size of the female, from 10 in a female with a shell length of 2 mm to 750-900 embryos in the largest shells. Breeding occurs year-round, but is reduced in late summer and winter (Reid 1996).

Littorina saxatilis inhabits a wide range of habitats. On the most exposed coasts, they are usually confined to sheltered crevices, but can also occur in the spray zone, above normal tidelines. More usually, they are found from the mid-tide to mean high-water of spring tides, but they also occur in subtidal regions of brackish lagoons and marshes, associated with solid substrate such as stones, shells, and the roots of Spartina. As with L. littorea, occurrence in the subtidal zone is limited by predation by crabs, fishes, and other predators (Reid 1996). In a Quebec population, the smaller snails tend to be concentrated in the upper intertidal, while larger specimens were more frequently found in the lower zone (Pardo and Johnson 2005). As an upper-intertidal snail, the Rough Periwinkle is tolerant to a wide range of air and water temperatures and also exposure to low salinity, especially over short durations (Reid 1996; Sokalova and Portner 2003). However, its range is probably limited by high temperatures in southern Europe, where it is largely confined to lagoonal habitats and the West Atlantic coast south of New York Harbor, where it is restricted to man-made rocky habitats (Reid 1996; Counts and Bashore 1991; Prezant et al. 2002).

Littorina saxatilis grazes unselectively on diatoms, cyanobacteria, and filamentous and leafy macroalgae (Reid 1996). Littorina saxatilis and L. littorea are potential competitors, and overlap in the intertidal zone, but L. saxatilis ranges higher up on the shore (Dexter 1945; Clay 1961). Predators include crabs, including Carcinus maenas (Green Crab), fishes, and shorebirds (Reid 1996). This snail also hosts a variety of parasites. Fourteen trematode species were found in L. saxatilis sampled at 29 East Coast sites from Newfoundland to Connecticut, but only 4 of those trematodes are known from its introduced range in San Francisco Bay (Blakeslee et al. 2012).

Impacts of Littorina saxatilis have not been studied in San Francisco Bay or in other invaded areas. However, since L. saxatilis is larger than native Northeast Pacific periwinkles and survives under a very wide range of environmental conditions, it is potentially capable of competing with and displacing native snails from California to Alaska. The native periwinkles L. scutulata, L. plena and L. keanae were absent in the immediate vicinity of introduced L. saxatilis populations in San Francisco Bay (Carlton and Cohen 1998), suggesting possible competition or behavioral exclusion. If L. saxatilis extends its range north of San Francisco Bay competition with the morphologically similar species, L. subrotundata and L. sitkana is possible (Carlton and Cohen 1998). Modeling based on the present range of L. saxatilis, and ocean conditions, indicates that it could potentially colonize the entire West Coast from California to the Arctic Ocean (de Rivera et al. 2011). If this snail develops large populations, then impacts from increased grazing on intertidal algal communities are possible (Carlton and Cohen 1998).

Partly because of potential impacts, but also based on this snail's limited introduced range and dispersal, an attempt was made to eradicate introduced populations in San Francisco Bay (Smithsonian Environmental Research Center 2004). However, in the 9+ years since its introduction, L. saxatilis had spread over enough area of the coastline to render eradication impractical (Ruiz et al., unpublished data).

Balch, Francis Noyes (1899) List of marine mollusca of Coldspring Harbor, Long Island, with descriptions of one new genus and two new species of nudibranchs, Proceedings of the Boston Society of Natural History 29(7): 133-163

Blakeslee, April M. H. and 5 authors (2012) Parasites and invasions: a biogeographic examination of parasites and hosts in native and introduced ranges, Journal of Biogeography 39: 609-622

Johannesson, K. (1988) The paradox of Rockall: why is a brooding gastropod (Littorina saxatilis) more widespread than one having a planktonic larval dispersal stage (L. littorea)?, Marine Biology 99: 507-513

Perkins, George H. (1869) Molluscan fauna of New Haven. A critical review of all the marine, fresh water and land Mollusca of the region, with descriptions of many of the living animals and of two new species. Part I. Cephalopoda and Gasteropda, Proceedings of the Boston Society of Natural History 13: 109-136

Sokolova, I. M. (2000) Effects of salinity on the growth rate and survival of juvenile Littorina saxatilis gastropods from habitats with different salinity regimes., Russian Journal of Marine Biology 26(6): 427-431.

Wilhelmsen, U. (1999) Rapid colonization of new habitats in the Wadden Sea by the ovoviparous Littorina saxatilis (Olivi), Helgoländer Meeresuntersuchungen 52: 325-335