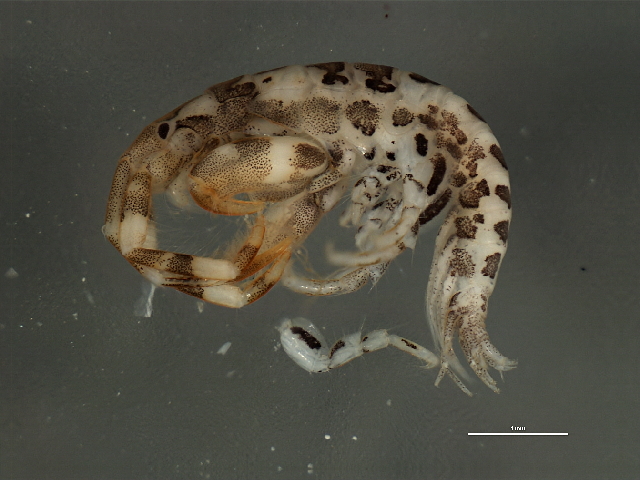 Jassa marmorata is a tube-building gammarid amphipod found in shallow marine environments. It has a broad global distribution and has previously been confused with a number of congeneric species, so its native distribution is uncertain. However, it was described from Rhode Island and likely originated in the North Atlantic. It is introduced to Western North America, South America, South Africa, Australia, New Zealand, China, Japan, and Russia. This species can be found attached to algae, rocks, pilings, buoys, ships’ hulls, and within ballast water. Its impacts are varied. In some cases, dense aggregations have been shown to discourage settlement by other species, but in other instances, masses of amphipod tubes provide habitat for mobile organisms.

Jassa marmorata was described from Narragansett Bay, Rhode Island in 1903 (Holmes 1905). It has been widely confused with J. falcata, which is known, with certainty, only from the Northeast Atlantic (Conlan 1990). Reports of J. falcata around the world, have been found to refer to Jassa marmorata (Conlan 1990). Here, we assume a North Atlantic origin for J. marmorata, possibly, but not certainly, from the Northwest Atlantic (Cohen and Carlton 1995; Chapman 2000). In the Northwest Atlantic, J. marmorata ranges from the Gulf of St. Lawrence to the Gulf of Mexico (Bousfield 1973; Conlan 1990). In the Northeast Atlantic, it ranges from Sweden to Senegal, throughout the Mediterranean and Black Sea (Conlan 1990; Sezgün et al. 2001; Sorbe et al. 2002). Jassa marmorata is now known from both sides of the temperate South Atlantic, North Pacific, and South Pacific (Conlan 1990; Hong 1993; Poore and Storey 1999). Both Jassa marmorata and J. falcata are tube-dwelling and attach to algae, rocks, pilings, buoys, ship hulls, and ballast water (Woods Hole Oceanographic Institution 1952; Bousfield 1973; Lincoln 1979; Conlan 1990; Cohen and Carlton 1995).

Determining the range of J. marmorata is problematic, due to the presence of similar species [e.g. J. falcata and in the Northeast Atlantic; J. staudei and J. slatteryi in the Northeast Pacific, and many other species elsewhere (Conlan 1990)]. A recent molecular study found that many morphologically identified 'J. marmorata from the Northeast Pacific were actually the native species J. slatteryi and J. staudei', while, all the specimens from North Carolina belonged to an undescribed new species (Pilgrim and Darling 2010).

The date of arrival of Jassa marmorata on the West Coast is not known- in addition to historical confusion with J. falcata, at least 8 native or cryptogenic species of Jassa are present (Chapman 2007). One early record of 'J. falcata' from Coos Bay, Oregon, collected in 1949, probably refers to J. marmorata (Barnard 1954, cited by Carlton 1979; Conlan 1990). By the 1950s, it was very abundant in Los Angeles-Long Beach Harbor, where it was a major organism fouling pilings (Barnard 1958). The first San Francisco Bay record is from Oakland in 1977 (Carlton 1979). It now occurs in the Central, South, and San Pablo portions of the Bay (Cohen et al. 2005; Carr et al. 2011). Its current range along the coast extends from Bahia de Los Angeles, Baja California, Mexico (28.9 N) to Point Slocum, Alaska (57.5 N) (Conlan 1990). Within this distribution it has been reported from most of the major saltwater shipping ports (San Diego, Los Angeles-Long Beach, Port Hueneme; San Francisco, Humboldt Bay, Coos Bay, Yaquina Bay, Puget Sound, Victoria) (Barnard 1958; Carlton 1979; Conlan 1990; Cohen et al. 1998; Fairey et al. 2002) and from many smaller bays and harbors, receiving only recreational and fishing traffic (Tijuana Estuary, Alamitos Bay, Morro Bay, Elkhorn Slough, Halfmoon Bay, Tomales Bay, Bodega Harbor, Crescent City Harbor, Willapa Bay, Barkley Sound) (Carlton 1989; Conlan 1990; Cohen et al. 2001; Fairey et al. 2002; Jeff Crooks, personal communication 2005). The relatively late reports of this genus suggest that it was introduced to the West Coast by shipping in the 20th century, rather than by oysters in the 19th century (Carlton 1979; Cohen and Carlton 1995).

Jassa marmorata exhibits dramatic sexual dimorphism, especially manifest in the large 2nd gnathopod of the male. Males vary in size (overall and the size of feeding appendages), particularly the 2nd gnathopod, maturing either as 'major' forms with very large gnathopods and large 'thumbs', or 'minor' forms which are smaller overall with much smaller gnathopods. The major forms are thought to be more aggressive in mating, while the latter are thought to function as 'sneaks' (Conlan 1990; Conlan et al. 2021).

Both the major and minor forms have weak rostrums, with medium-large round eyes located near the ends of the prominent anterior lobes. The coxa plates are medium-sized, and mostly separated from plates 2, 3, and 4, which are deeper than 1 and 5. Coxal plate 2 is short and angular. The anterior lobe of plate 5 is more than 3X deeper than the plate's posterior lobe. Both antennae are fairly robust, with Antenna 2 being longer than Antenna 1. Segments 2 and 3 of the peduncle of antenna 1 are roughly equal. The peduncle and the flagellum of Antennae 1 and 2 have numerous long setae on the posterior margin. Segment 5 of Antenna 2 bears simple setae towards the proximal end, but plume-like setae distally. The flagellum of Antenna 2 is very short.

The Gnathopod 1 is similar between the sexes, and 'major' and 'minor' males. The propodus (Segment 6) is oval, narrowing distally, with a convex palm. The dactyl is curved with a finely serrated inner margin. The propodus (segment 2) of gnathopods 2 of a 'major' male is greatly inflated into two lobes, with the main, upper body resembling the palm of a hand, and a lower lobe resembling a thumb. 'Minor' males are smaller and have a smaller propodus, varying in shape, but with a much less developed thumb (Holmes 1905; Conlan 1989). Gnathopod 2 in females is much larger than Gnathopod 1, and the palm of the propodus has a convex inner margin, with proximal and distal protuberances, lined with clusters of setae. Females and juvenile males lack the thumb, which only develops on the male’s last molt.

Jassa falcata
This species has been widely reported around the world, but its occurrence has not been confirmed outside the northeast Atlantic (Conlan 1990).

Jassa morinoi
Jassa morinoi is found on both sides of the North Pacific, Mediterranean, and South Africa. It is considered cryptogenic on the West Coast of North America (Conlan 1990; Chapman 2007).

Jassa slatteryi
Jassa slatteryi is found on both sides of the North Pacific, sites on the coast of Europe, Chile, Brazil, Australia, and New Zealand (Conlan 1990; Chapman 2007).

Jassa marmorata is a widespread tube-dwelling amphipod. Gammarid amphipods have separate sexes, brooded embryos, and direct development (Bousfield 1973). Gravid females were seen year-round in Jamaica Bay, New York, but were most abundant in May-August (Franz 1989). Females are larger and more fecund in winter and spring, with monthly mean lengths of 5.7-6.3 mm and 32-44 embryos per female in January through May, versus lengths of 4.6 to 5.4 mm and 16 to 26 embryos in June through December (Franz 1989). In German populations, brood size increased from 2-5 at ~ 5 mm to 125-175 embryos per female at 11 mm (Beerman and Purz 2013).

Amphipods of the genus Jassa not only have strong sexual dimorphism, but also have dimorphism within males, with 'major' forms having large gnathopods and large 'thumbs', and smaller 'minor' forms having much smaller gnathopods and thumbs. The major forms are thought to be more aggressive in mating, while the latter are thought to function as 'sneaks', mating furtively (Borowsky 1985; Conlan 1990; Clark 1997a; Clark and Caudill 2001). The morphological differences are determined by diet quality, rather than genetics (Kurdziel et al. 2002). Major males perch on the females' tubes, display their gnathopods, and drive away other major males, while minor males 'sneak' in, not challnging major males. Males mate multiple times, while females mate only once. Both morphs have equal mating success (Clark 1997).

Jassa marmorata is widely distributed in temperate and subtropical regions, and can survive temperatures from 0-27C (Franz 1989). It is known mostly from polyhaline-marine salinities (18-38 PSU), but has been collected at salinities as low as 12 PSU (Cohen et al. 2001). It secretes threads of 'amphipod silk', to which sediment detritus is attached, to form its tubes. When the amphipods are abundant, they can form a turf, roughly one body-length long. Individuals move inside the tube, and can 'somersault' to emerge at either end. The amphipods partially emerge at the mouth of the tube, extending their antennae. In still water, animals create water movement by beating their pleopods. The setae of the antennae capture food particles, and are also used for tube-building (Dixon and Moore 1997). Jassa marmorata prefers sites with currents sufficient to bring a good supply of food particles, but not strong enough to dislodge the animals (Borowsky 1985). One of the more unusual habitats colonized by J. marmorata are the pipes and tanks of flowing seawater systems in laboratories (Borowsky 1985; Dixon and Moore 1997).  It is more often found in habitats including rocks, oyster reefs, eelgrass beds, marinas, docks, buoys, jetties, shipwrecks and ships' hulls (Bousfield 1973; Franz 1989; Conlan 1990; Carr et al. 2011). In Jamaica Bay, New York, the population was largest in spring and was found growing on bryozoans and other fouling organisms (Franz 1989). Jassa marmorata appears to be primarily a suspension feeder on phytoplankton and detritus, but also preys on ostracods and other small crustaceans (Bousfield 1973; Dixon and Moore 1997). Potential predators include shrimps, crabs, and fishes (Franz 1989).

Jassa marmorata is a widespread tube-dwelling amphipod, which rapidly colonizes artificial and natural habitats, and can develop dense populations, especially where swift currents bring a steady flow of phytoplankton and other food particles. This amphipod is important prey for shrimps, fishes, and crabs (Bousfield 1973; Franz 1989; Beerman and Purz 2013). There are few reported impacts for this species.

Habitat Change- Dense masses of amphipod tubes may discourage settlement by boring organisms and other foulers, such as the tunicate Ciona spp. (Barnard 1958). They can also provide habitat for other organisms, such as predatory polychaetes (Barnard 1958).

Alonso de Pina, Gloria (2005) A new species of Notopoma, 1996, and a new record of Jassa marmorata, 1903 from the southwestern Atlantic (Amphipoda: Corophiidea: Ischyroceridae), Procceedings of the Biological Society of Washington 118(3): 528-538

Bakir, Kerem (2012) Contributions to the knowledge of crustaceans on soft bottoms in the Sea of Marmara, with a checklist, Crustaceana 85(2): 219-236

Christodoulou, Magdalini; Paraskevopoulou, Sofia; Syranidou, Evdokia; Koukouras, Athanasios (2013) The amphipod (Crustacea: Peracarida) fauna of the Aegean Sea, and comparison with those of the neighbouring seas, Journal of the Marine Biological Association of the United Kingdom 93(5): 1303-1327

Dixon, I. M. T.; Moore, P. G. (1997) A comparative study on the tubes and feeding behaviour of eight species of corophioid Amphipoda and their bearing on phylogenetic relationships within the Corophioidea, Philosophical Transactions of the Royal Society of London B 352: 93-112

Kurdziel, Josepha P.; Knowles, L. Lacey K (2002) The mechanisms of morph determination in the amphipod Jassa: implications for the evolution of alternative male phenotypes, Proceedings of the Royal Society of London B 2002(269): 1749-1754

Platvoet, Dirk, Pinkster, Sjouk (1995) Changes in the Amphipod Fauna (Crustacea) of the Rhine, Meuse and Scheldt Estuary Due to the 'Delta Plan' Coastal Engineering Works, Netherlands Journal of Aquatic Ecology 29(1): 5-30

Procaccini, Gabrielle; Scipione, Maria Beatrice (1993) Observations on the spatial-temporal distributions of crustacean amphipods in the Fusaro coastal lagoon (Central Tyrhennian Sea, Italy), and some notes on their presence in Mediterranean lagoons, Marine Ecology 13(3): 203-224

Sorbe, Jean-Claude; Basin, Alexandra; Galil,Bella S. (2002) Contribution to the knowledge of the amphipoda (Crustacea) of the Mediterranean Coast of Israel., Israel Journal of Zoology 48: 87-110