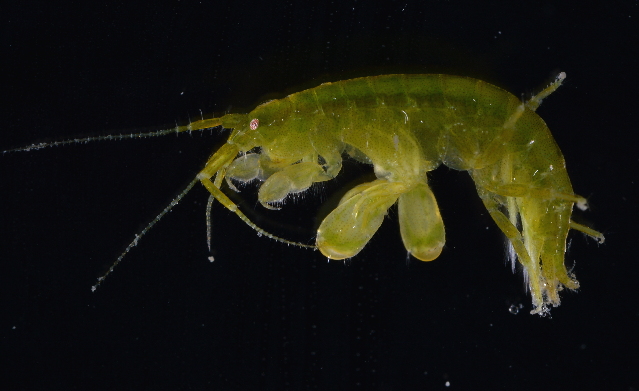 Ampithoe valida is a marine gammarid amphipod, which is found associated with algae and seagrasses where it makes nests or loose tubes of detritus. It is native to the East coast of North America from Cape Canaveral, Florida to Maine. It has been introduced to the West coast, ranging from San Diego Bay, California to Haida Gwaii, British Columbia. It has also been introduced to the Netherlands, Portugal, France and Argentina. Cryptogenic populations (i.e. origin unknown) are known from Venezuela, China, Japan and Korea. In California it feeds on eelgrass (Zostera marina) flowers and seeds, but its direct impacts require further study.

Ampithoe valida was described from Great Egg Bay, New Jersey by S. I. Smith in 1873. It occurs on the East coast of North America from Maine to Cape Canaveral, Florida (Mills et al. 1964b; Bousfield 1973; Fox and Bynum 1975; Power et al. 2006). It is associated with seaweeds and seagrasses in lower intertidal and shallow coastal waters (Bousfield 1973). It has been introduced to the West coast of North America from Haida Gwaii, British Columbia to San Diego Bay, California (Barnard 1965; Carlton 1979; Fairey et al. 2002; Sloan and Bartier 2004). West Coast populations appear to be introduced, based on historical (Carlton 1979) and genetic data (Pilgrim and Darling 2010). Genetic data suggest multiple introductions of at least three genotypes, only one of which was found at the two East Coast sites sampled (Pilgrim and Darling 2010).

Ampithoe valida is introduced and established in Portugal (Pardal et al. 2000) and Argentina (Alonso de Pina 1997). We consider a population in Venezuela (Martin and Diaz 2003, Ortiz et al. 2007) to be cryptogenic. In China, Korea, and Japan, A. valida is regarded as conspecific with the East Coast form, and either a separate subspecies or a distinct species (Nagata 1960; Barnard 1965; Kim and Kim 1988). Further molecular studies are needed to determine whether A. valida is a single species or a species complex (Pilgrim and Darling 2010).

In San Francisco Bay, A. valida occurs in the Central, South, and San Pablo Bays (Cohen and Carlton 1995; Carr et al. 2011). It is one of the most abundant amphipods in Eelgrass beds in San Francisco Bay (Carr et al. 2011). In 2010, it was found at Martinez, in the Carquinez Strait (Foss 2009), and in the fouling of a decommissioned ship in Suisun Bay (Llansó et al. 2011). Possible vectors include ballast water, fouling, shipments of Eastern Oysters, and seaweeds used to pack seafood or baitworms. A genetic analysis (Pilgrim et al. 2011) indicates that at least three genotypes were introduced and that multiple introductions have occurred from different source populations. Further molecular studies, including more sampling of East Coast and Northwest Pacific populations will be needed to determine the origin of the different West Coast populations (Pilgrim et al. 2011).

Ampithoe valida has been reported from the Mondego estuary (in 1992, Pardal et al. 2000) and the Ria de Aveiro (Cunha et al. 1999), Portugal where it is abundant and well-established. Additional populations were found in Mediterranean lagoons along the French coast in 2000-2003, and in Vlissingen, Netherlands in 2014 (Faasse 2015). Assuming that the identification is correct, the European populations are very likely introduced by ballast water or hull fouling from North America.

As noted above, the identity and status of populations in Japanese, Korean, and Chinese waters is uncertain. Stephensen (1944, cited by Barnard 1965; Nagata 1960) identified Japanese specimens as a separate species, A. shimizuensis. Kim and Kim (1988) treated shimizuensis as a subspecies of A. valida and reportedly found both A. v. shimizuensis and the original form of A. valida in Korean waters. Nagata (1960) considered Japanese specimens to match the original description of A. valida. The A. v. shimizuensis form could represent a cryptic species, perhaps mixed with introduced populations of Northwest Atlantic A. valida. Molecular analysis would be needed to determine the species status and origin of Northwest Pacific populations.

Ampithoe valida is a tube-dwelling amphipod, found in coastal waters and estuaries. It has two small black eyes. The coxal plates 1-4 are deep, with short rows of slender setae at the postero-distal margins. Coxa 5 is longest. Antenna 1 is about half of the body length, and is equal (Barnard 1965) or longer (Bousfield 1973) than Antenna 2. The flagellum of Antenna 1 is much longer than that of Antenna 2.

The gnathopods are somewhat sexually dimorphic in this genus. In males, segment 5 of gnathopod 1 is longer and deeper, than segment 6. The posterior lobe of segment 5 is broad and bears many setae on its lower surface. In the female, segments 5 and 6 are roughly equal in length and breadth. Gnathopod 2 is larger than Gnathopod 1 in both sexes. In males, segment 6 is very large and stout, and roughly rectangular, with a vertical palm, and a median tooth, with a squared-off tip. In females, segment 6 is also larger than segment 5, but is less inflated.

Ampithoe valida is believed to be native to the Northwest Atlantic, but it has a wide global distribution being known from the Northeast Atlantic (Portugal, Pardal et al. 2000), the Southwest Atlantic (Argentina, Alonso de Pina 1997), the Northeast Pacific (British Columbia to San Diego, California, Barnard 1965; Carlton 1979; Pilgrim and Darling 2010), and the Northwest Pacific (China, Korea, Japan, Nagata 1960; Kim and Kim 1988). These populations may all be derived from the Northwest Atlantic, but some show evidence of cryptic diversity. Some taxonomists have reported consistent morphological differences in Northwest Pacific populations, and identified them as a separate species (A. shimizuensis, Stephensen 1944, cited by Nagata 1960), or subspecies (A. v.shimizuensis, Kim and Kim 1988), while others have considered the differences insignificant (Nagata 1960). Pilgrim and Darling (2010) have found three distinct lineages on North American coasts. One, Clade A was found on the East Coast (Connecticut and South Carolina), and in Humboldt and San Francisco Bays. Two were found on the West Coast, Clades, B and C, with Clade B having the widest distribution. The historical evidence suggests that all three clades were introduced, but the genetic evidence suggests multiple introductions and the possibility that 'A. valida' represents a species complex (Pilgrim and Darling 2010).

Ampithoe valida shimizuensis
This Northwest Pacific form has been variously treated as a synonym of A. valida, a subspecies, or a full species (Stephensen 1941, cited by Barnard 1965; Nagata 1960; Barnard 1965; Kim and Kim 1988).

Ampithoe valida is a tube-dwelling amphipod occurring in coastal waters and estuaries (Bousfield 1973; Borowsky 1983). Gammarid amphipods have separate sexes, brooded embryos, and direct development. Female A. valida in New England breed from May to September, with several broods per year (Bousfield 1973). Females mature at 5 mm, males at 6 mm, and they reach 12.5 and 12 mm respectively (Conlan and Bousfield 1982). Males leave their tubes, and cruise around to join a nearby female in her tube before molting (Borowsky 1983). Females in Portugal carried means of 6 to 24 embryos (Pardal et al. 2000), while cultured A. 'valida' in China had 6-192 embryos per brood (Zheng et al. 2013). Ampithoe valida has a semi-annual life cycle in Portugal, with short-lived spring and summer generations (7 to 8 months) and long-lived autumn and winter generations (9 months) (Pardal et al. 2000). In North American waters, there at least three genetic lineages of A. valida (Pilgrim and Darling 2010), so life history characteristics may vary among populations

Ampithoe valida has a wide native latitudinal range and temperature tolerance, from the Gulf of Maine (New Hampshire) to Florida and Texas (Bousfield 1973; LeCroy 2002; Redmond et al. 1994). This amphipod ranges from marine to brackish waters - it was collected at 9 PSU in Willapa Bay, Washington, (Cohen et al. 2001), and occurs in Carquinez Strait and Suisun Bay in San Francisco Bay (Foss 2009; Llanso et al. 2011). Ampithoe valida is usually associated with green algae (eg. Ulva spp.) and/or eelgrass (Zostera marina) (Bousfield 1973). This amphipod constructs tubes of bits of detritus glued together with secretions (Borowsky 1983). In most estuaries, A. valida feeds on algae, including Ulva and other relatively soft algae (Best et al. 2013; Nicotri 1980; Pardal et al. 2000; Zheng et al. 2013). However, in San Francisco Bay, A. valida feeds on the leaves of Eelgrass (Zostera), but had a strong preference for the grasses' flowers and seeds (Reynolds et al. 2012). In mesocosm experiments, predation by fishes (Shiner Seaperch- Cymatogaster aggregata; Pinfish- Lagodon rhomboides) reduced abundance of A. valida (Carr and Boyer 2014).

Ampithoe valida is a widespread hebivorous tube-dwelling amphipod. In most of its range, it is known as a grazer on benthic algae, including Ulva, Cladophora, and other soft algae (Nicotri 1980; Pardal et al. 2000; Zheng et al. 2013). For unknown reasons, in San Francisco Bay, it shows a strong preference for the flowers and seeds of Eelgrass (Zostera marina), and also feeds on the leaves. Experiments and field studies suggest that A. valida has negative impacts on Eelgrass meadows (Carr et al. 2011; Reynolds et al. 2012; Lewis and Boyer 2014). In mesocosm experiments, fish predation reduced the impact of A. valida on Eelgrass (Carr and Boyer 2014). This amphipod is potentially an important prey for fish, but its impact on fish populations is unknown.

Alonso de Pina, Gloria M. (1997) Records of intertidal amphipods from the southwest Atlantic, with the description of a new species of Elasmopus, Journal of Crustacean Biology 17(4): 745-757

Carlton, James T. (1989) Man's role in changing the face of the ocean: biological invasions and implications for conservation of near-shore environments, Conservation Biology 3(3): 265-273

Mills, Eric L. (1964b) Noteworthy amphipods in the collection of the Yale Peabody Museum, Postilla 79: 1-41