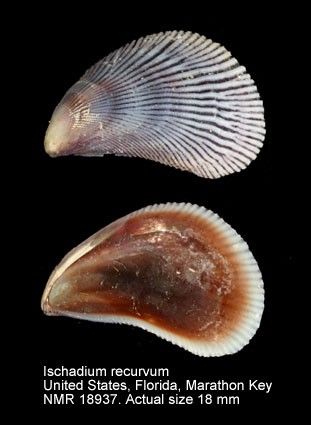 Ischadium recurvum is commonly known as the Hooked Mussel. It was first described from the Mississippi River near New Orleans and its native range extends throughout the Gulf of Mexico to the Chesapeake Bay and possibly the Delaware Bay. An introduced population is established in Rhode Island. A few specimens were collectec off southern California in 1921, and 1931, but no established populations are known on the West Coast.  Larvae of I. recurvum settle on a variety of hard substrates, including oysters, wood, androcks and they can tolerate an extremely wide range of temperatures and salinities. In their native range, they can foul oysters causing the oysters to grow in a misshapen form, or compete with oyster spat for space. In October 2018, specimens of the Hooked Mussel were found in Amsterdam. Nordseekanaal, . Growth lines indicated that the largest mussels were 6-7 years old, and that a population was established.

Ischadium recurvum was first described by Rafinesque (as Mytilus recurvus) in 1820, from the Mississippi River near New Orleans (Johnson 1915). In 1822 Say gave it (as Mytilus hamatus) a similar distribution: 'Inhabits the Gulf of Mexico, frequently carried to New Orleans attached to the common oyster' (Say 1858). The Hooked Mussel is native to Chesapeake Bay, based on its occurrence in Tertiary fossils (Conrad 1830), museum specimens (Academy of Natural Sciences of Philadelphia 2011; US National Museum of Natural history collections) and archaeological excavations (Torben Rick, personal communications). It is also likely native to Delaware Bay (Maurer et al. 1974), but its range was extended northward to New England by 19th century oyster transplants (Smith and Prime 1870; Perkins 1871; Richards 1938; US National Museum of Natural History 2011). Most of these introduced mussels have apparently died out, but populations persisted or have been re-introduced in Rhode Island estuaries (Sheldon Pratt, personal communication). There are two puzzling old records of individuals of this species in southern California (Carlton 1979).

The only two records from California are both puzzling. Dall (1921, cited by Carlton 1979) reported it from the 'Newport area', California. The specimens were dredged from the Pacific Ocean off Newport (Calton 1979). Live specimens of this species were also dredged off Redondo Beach in Santa Monica Bay, in 1931, at 152 m depth (Carlton 1979). Neither collection was associated with oysters, and both were in an exceptional habitat for this estuarine species. These have to be attributed to ballast water or fouling, but they occurred some distance from the nearest major ports, Los Angeles-Long Beach Harbors.

Although early records are somewhat sporadic, the northern range edge of I. recurvum appears to be Chesapeake or Delaware Bay (Dall 1889; Maurer et al. 1974; US National Museum of Natural History collections, Academy of Natural Sciences of Philadelphia 2011). From 1869 to 1938, there were numerous reports of I. recurvum from Barnegat Bay, New Jersey to Welfleet Massachusetts, on Cape Cod Bay, usually on newly transplanted oysters (Smith and Prime 1870; Johnson 1915; Richards 1938; Academy of Natural Sciences of Philadelphia 2011; US National Museum of Natural History 2011). There have been few recent records north of the Chesapeake, and suggestions that the introduced mussels have died out due to cold winter weather (Gosner 1971; Morris 1975). However, they are locally common in brackish tributaries (Pettaquamscutt River, Kickamuit River) of Narragansett Bay, Rhode Island (Sheldon Pratt 1997, personal communication). Ischadium recurvum has been collected in fouling on ships on the East Coast of the United States (Visscher 1927; Davidson et al. 2008). The established populations in Rhode Island could result from persistence from the early oyster introductions, or represent new introductions by pleasure boats (James Carlton, personal communication).

Elsewhere in the World- In October 2018, specimens of the Hooked Mussel were found in the Nordseekanaal, in the Coenhaven section of Amsterdam. Growth lines indicated that the largest mussels were 6-7 years old, and that a population was established (Goud et al. 2019)

Ischadium recurvum is roughly triangular in shape, and strongly curved toward the beak, with strong radiating ribs. The beak is terminal, and the hinge has 3 or 4 small teeth. The exterior color of the shell is gray or brown, to dull bluish-black. The interior is polished and purplish, with a whitish margin. Adult mussels are 25-50 mm in length. This species is characteristic of estuaries, and is usually found attached to oysters, logs, pilings, or rocks, often in brackish water (Abbott 1974; Gosner 1971; Morris 1975; Lippson and Lippson 1997).

Ischadium recurvum has separate sexes. Animals mature at about one year of age. Eggs are brooded, but sperm are released into the water column. Fertilized eggs are brooded and develop into planktotrophic shelled veligers (Allen 1960).

Larvae settle on a variety of hard substrates, including oysters, wood, and rocks (Abbott 1974; Gosner 1971; Morris 1975; Lippson and Lippson 1997). They tolerate an extremely wide range of temperature and salinity, with water temperatures of 0 to 35?C (Nauman and Cory 1969) and salinities of 4.5-36 PSU (Allen 1960; Castagna and Chanley 1973). However, based on their geographical distribution and patterns of abundance, they appear to be most successful in regions with mild winters and low salinities (Abbott 1974; Morris 1975; Lippson and Lippson 1997).

In its native range, Ischadium recurvum is often an abundant fouling organism and may 'wrap up' oysters when abundant (Andrews 1953), causing the oysters to grow in a misshapen fashion (Allen 1962). Ischadium recurvum may compete with oyster spat for space (Andrews 1953). Competition for food with oysters and other suspension-feeding fouling organisms is possible, especially when large biomasses of I. recurvum are present.

Conrad, T. A. (1830) On the geology and organic remains of a part of the peninsula of Maryland, Journal of the Academy of Natural Sciences of Philadelphia 6(2): 205-223

Dall, William Healey (1885) List of marine Mollusca comprising the quaternary fossils and recent forms from American localities between Cape Hatteras and Cape Roque including the Bermudas, Bulletin of the United States Geological Survey 24: 1-336

Davies, Tudor T. (1972) Effect of environmental gradients in the Rappahannock River estuary on the molluscan fauna, Memoirs of the Geological Society of America. 133: 263-290

Kennedy, Victor S. (1980) Comparison of recent and past patterns of oyster settlement and seasonal fouling in Broad Creek and Tred Avon River, Maryland, Proceedings of the National Shellfisheries Association 70(`): 36-46

Perkins, George H. (1871) Molluscan fauna of New Haven. A critical review of all the marine, fresh water and land Mollusca of the region, with descriptions of many of the living animals and of two new species. Part II: Acephala and Bryozoa., Proceedings of the Boston Society of Natural History 13: 138-163

Whyte, Thomas R. (1988) Fish and shellfish use in the woodland period on the Virginia coast, Journal of Middle Atlantic Archaeology 4: 105-120