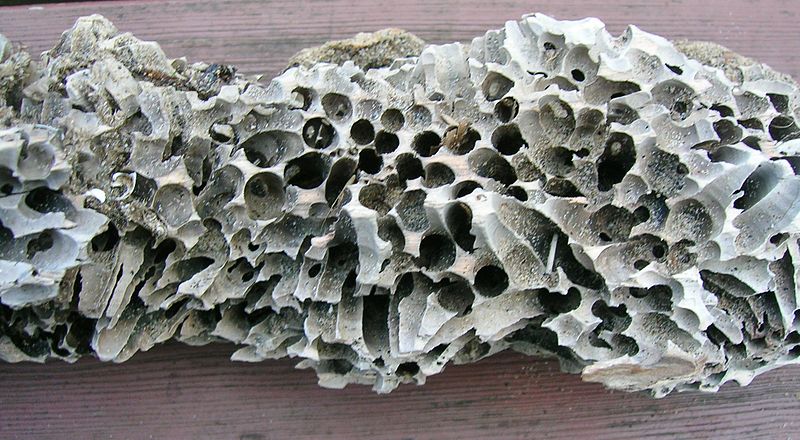 Lyrodus takanoshimensis belongs to the family Teredinidae (shipworms), which are highly modified mollusks adapted for boring into wood. It was first described from Japan and may be native to the Indo-Pacific; however it is widely distributed in tropical and subtropical areas so determining its native range is difficult. Introduced specimens were identified from Vancouver Island, British Columbia, Canada in 1982. It is unknown whether this species is still established here because no other introduced locations have been reported. This species is found in fixed wooden structures, panels, and driftwood. No impacts have been reported from British Columbia.

Image Credit: Wikimedia Commons and the CC BY-SA 3.0 License. This is not an image of Lyrodus takanoshimensis, but shows shipworm (Teredo navalis) damage to a piece of timber.

Lyrodus takanoshimensis was first described from Japan, but according to Turner (1971) is 'probably worldwide in tropical and subtropical areas'. Most of the available records are from the Indo-West Pacific, including Japan to India, Australia, and Vanuatu (Turner 1966; Museum of Comparative Zoology 2008-2012; Pati et al. 2012), but Teredo dicroa, a probable synonym, was described from Benin, West Africa (Turner 1966) and an undated specimen was collected in Haifa, Israel (Museum of Comparative Zoology 2008-2012). In 1982, shipworms, tentatively identified as this species, were found in Ladysmith Harbor, Vancouver Island, British Columbia (Popham 1983).

In 1981, shipworms of the genus Lyrodus were found in submerged tree branches near the head of Ladysmith Harbour, Vancouver Island, British Columbia. They were tentatively identified as Lyrodus takanoshimensis by Ruth Turner of Harvard University. A possible vector is the planting of Pacific Oyster (Crassostrea gigas) seed from 1920 to 1960, in wooden boxes. The shipworms were found in warm shallow water at the head of the harbor, but no infestation was found in panels placed in the open harbor (Popham 1983). Popham considered this shipworm to be possibly established, but we are unaware of further records from British Columbia.

Lyrodus takanoshimensis belongs to the family Teredinidae (shipworms), which are highly modified mollusks, hardly recognizable as bivalves, adapted for boring into wood. The shell is reduced to two small, ridged valves, covering the head and used for grinding and tearing wood fibers. The body is naked and elongated, and ends with two siphons protected by elaborate calcareous structures called pallets (Turner 1966).

In Lyrodus takanoshimensis, the shell resembles that of the Naval Shipworm (Teredo navalis), but is smaller and more finely sculptured. The pallets have a calcareous base, which is flat distally and a golden brown cap made of periostracum. The cap has lateral thickenings projecting to the distal end. The outline of the pallet resembles that of the stem and cup of a wineglass, with straight sides in the distal portion. The inner distal margin of the cap is U-shaped, while the outer portion is V-shaped (Turner 1966; Popham 1983; Coan et al. 2000).

Shipworms dig long burrows in submerged wood in marine environments. They burrow by rocking and abrading the wood fibers. The mantle covers most of the length of the body, and secretes a calcareous lining along the interior of the burrow. They normally have their anterior end, with head and shells inside the burrow, and their siphons protruding. The pallets plug the burrow when the siphons are retracted (Barnes 1983).

Shipworms are protandrous hermaphrodites, beginning life as male and transforming to female, but they have no capacity for self-fertilization. Males release sperm into the water column, which fertilizes eggs for the female. The fertilized eggs are then brooded in the gills. Larvae are retained in the gills to the veliger stage. In some species, such as Teredo navalis and Lyrodus massa they are released in the early (straight-hinge) stages, and spend several weeks in the plankton, while in others (such as T. bartschi, T. furcifera, and Lyrodus pedicellatus) they are released in an advanced stage, as pediveligers, and spend only a few days in the plankton. We do not know the period of the planktonic stage in L. takanoshimensis. The larvae settle in the pediveliger stage, then rapidly metamorphose, and begin boring into wood within 2-3 days. They quickly develop a calcified shell, pallets, and burrow lining (Turner and Johnson 1971). Shipworms may obtain some (or most, Paalvast and van der Velde 2013) of their nutrition from plankton, but some comes from wood, which consists largely of cellulose. Symbiotic bacteria fix nitrogen, essential for protein synthesis (Turner and Johnson 1971; Barnes 1983).

The shipworm Lyrodus takanoshimensis can be a destructive woodborer. However, in its presumed native Indo-Pacific range, it typically co-occurs with many other species, so that its specific impacts are difficult to identify (Tsunoda 1979; Pati et al. 2012). In Ladysmith Harbour, British Columbia, where it is possibly established, it has not been found on any man-made structures and has had no known economic or ecological impacts (Popham 1983).