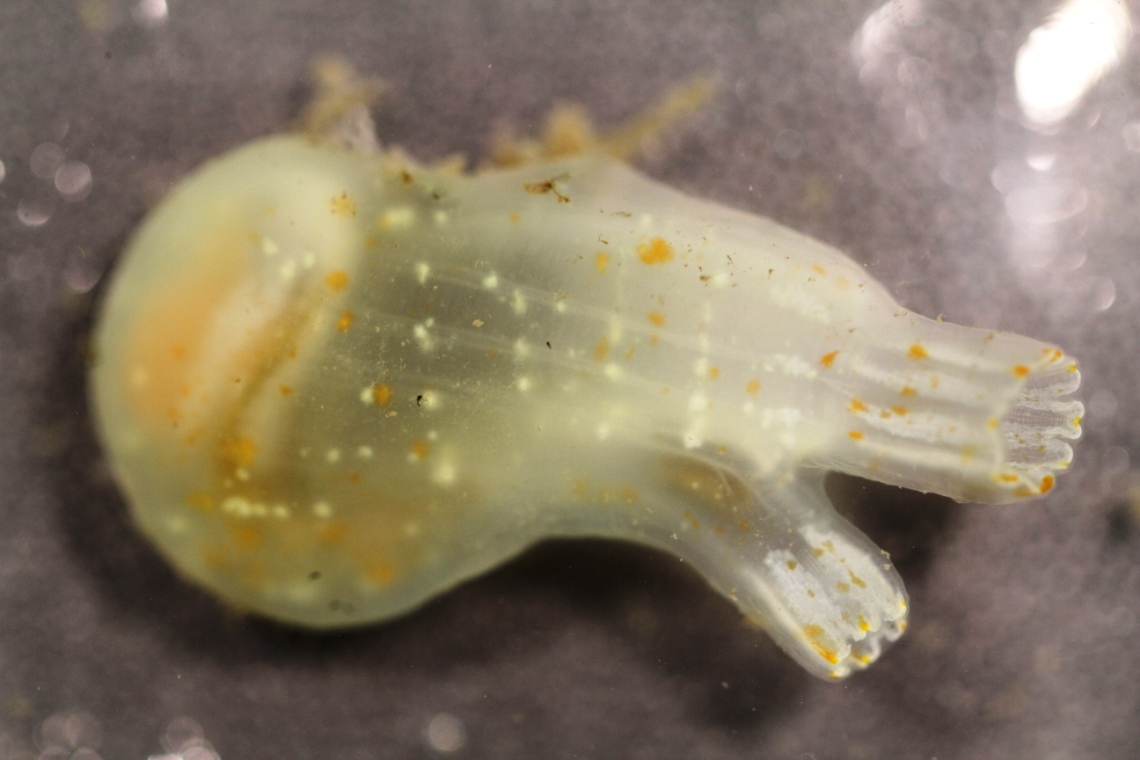 Ciona savignyi appears to be native to Japan and possibly offshore waters of Alaska and British Columbia.  Introduced populations were first reported on the West Coast of North America in 1985 at Long Beach Harbor, southern California. Since then it has been reported in a number of southern, central and northern California locations, including San Diego Bay, Santa Barbara Harbor, Monterey, Moss Landing, San Francisco Bay, Tamales Bay, Bodega Harbor, and Humboldt Bay. In 1998 it was found in Puget Sound near Seattle, Washington, and there are reports of extensive populations in several areas of Puget Sound and the northern reaches of the San Juan Islands. It is abundant in harbors and marinas and was likely spread through hull fouling on commericial and recreational boats. Despite its abundance in the fouling community, very little is known about its impacts, but it might compete with C. robusta, however, die-offs of both species due to environmental changes make this difficult to assess.

Ciona savignyi appears to be native to Japan and possibly northern Asia. In Japan, it can be found from Mutsu Bay (north end of Honshu) to the Seto Inland Sea (south end of Honshu), both on the Pacific and Sea of Japan coasts (Hoshino and Nishikawa 1980; Nishikawa 1991). In 2004, it was first collected as an introduced species in the most northern reaches of the Sea of Japan, in Peter the Great Bay, Russia (Zvyagintsev et al. 2007). In the northeast Pacific, there are two puzzling records from southeastern Alaska (Inside Passage: Loring, in Behm Canal) and northern British Columbia (Stuart Island, in Queen Charlotte Strait) (AK in 1903, USNM 5633, U.S. National Museum of Natural History 2003; BC in 1937, Lambert 2003). These could represent a cryptic species, a very early introduction, or a relict population. There are also disjunct records from Argentina (Hoshino and Nishikawa 1985) and Spain (Perez et al. 1957) which for the purposes of this database, we consider unverified. However, C. savignyi has recently invaded shallow coastal waters of central and southern California and Puget Sound (Cohen and Carlton 1995; Lambert and Lambert 1998; Lambert 2003; Cohen et al. 2005; Blum et al. 2007).

In Washington, C. savignyi has spread throughout Puget Sound. It was first discovered in 1998 in the Des Moines Marina near Seattle and by 1999 it had spread north to the Brownsville and Edmonds Marinas. In 2001, it was found near the Tacoma Yacht Club in Tacoma, WA (Lambert 2003). Subsequently, scuba divers discovered extensive populations in several other parts of Puget Sound, including Hood Canal in the western portion of Puget sound (in 2005, USGS Nonindigenous Aquatic Species Program 2003-2012) and in more northern reaches of the San Juan Islands (USGS Nonindigenous Aquatic Species Program 2003-2012).

Solitary ascidians are hermaphroditic, meaning that both eggs and sperm are released to the atrial chamber. Eggs may be self-fertilized or fertilized by sperm from nearby animals, but many species have a partial block to self-fertilization. Depending on species, eggs may be externally or internally fertilized. In external fertilizers, eggs and sperm are released through the atrial siphon into the surrounding water column were fertilization takes place. In internal fertilizers, eggs are brooded and fertilized within the atrial chamber and then released into the water column upon hatching. Fertilized eggs hatch into a tadpole larva with a muscular tail, notochord, eyespots, and a set of adhesive papillae. The lecithotrophic (non-feeding, yolk-dependent) larva swims briefly before settlement. Swimming periods are usually less than a day and some larvae settle immediately after release, but the larval period can be longer at lower temperatures. Once settled, the tail is absorbed, the gill basket expands, and the tunicate begins to feed by filtering (Barnes 1983).

Shipping and Industry: Ciona savignyi is now an abundant component of the fouling community in southern California and Puget Sound (Lambert and Lambert 2003). It is likely that fouling by C. savignyi affects shipping and harbor uses, but no impacts have been reported.

Competition: Currently, little is known about species competition with C. savignyi despite the fact that it is an abundant component of the fouling community in southern California and Puget Sound (Lambert and Lambert 2003). In southern California, it has been speculated that species competition is possible with C. intestinalis. However, die-offs of both species, due to environmental changes, make it difficult to determine the extent of competition. Lambert and Lambert (2003) state that 'Perhaps C. savignyi would eventually replace C. intestinalis were it not that the frequently changing habitat apparently tends to stabilize their co-occurrence in nearly equal numbers.'

Lambert, Gretchen (2003) New records of ascidians from the NE Pacific: a new species of Tridemnum, range extension and description of Aplidiopsis pannosum (Ritter, 1899), including its larva, and several non-indigenous species., Zoosystema 24(4): 665-675