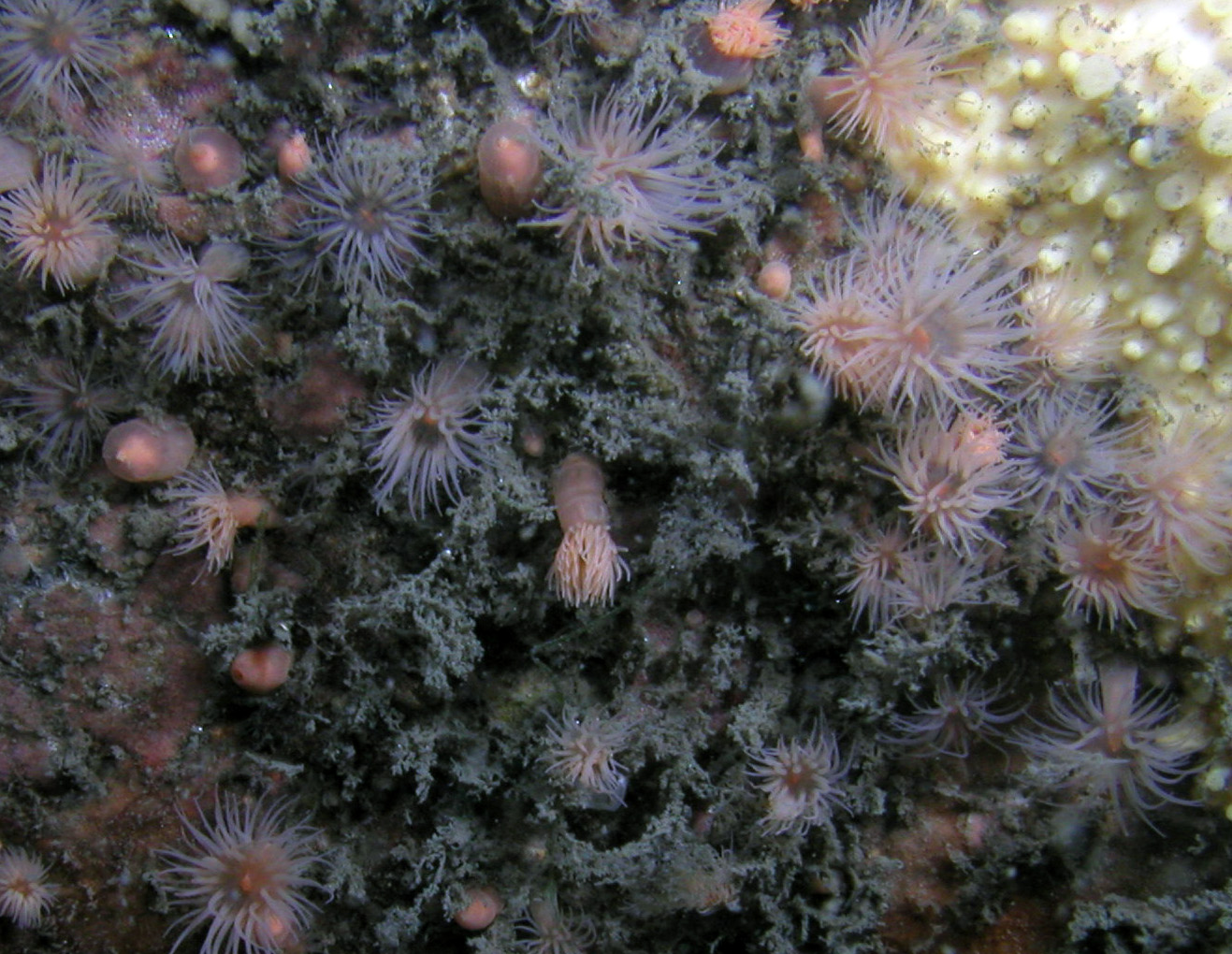 Diadumene leucolena is commonly known as the Ghost Anemone because of its translucent white color. It is native to the East Coast of North America spanning from Georgia, USA to New Brunswick, Canada. It has been introduced to Puerto Rico, the Canary Islands, Morocco, Cameroon, the Pacific coast of Panama, the West Coast of North America, and Hawaii. It is known from estuaries and sheltered waters, where it grows on oysters, rocks, seaweeds, pilings, and floats. It can also occur in sheltered tide pools, and is especially tolerant of variable salinities. There are no reported impacts of this species in its introduced range.

Diadumene leucolena is native to the East Coast of North America from Georgia, USA to New Brunswick, Canada (Gosner 1978; Casey 1997). It has been widely introduced with oysters and ship fouling to the West Coast of North America (Coos Bay, Oregon to Newport Bay, California; Carlton 1979), the Pacific Coast of Panama (Reimer 1976), Hawaii (Carlton and Eldredge 2009), Puerto Rico (Yale Peabody Museum 2008), Morocco, the Canary Islands, and Cameroon (Ocaña and Den Hartog 2002).

Diadumene leucolena may have been present near Honolulu, Oahu as early as the 1950s. It was found by Cuttress in 1977 (cited by Carlton and Eldredge 2009) in Pearl Harbor, Honolulu Harbor, and the Alai Wai Canal.

In the Pacific, D. leucolena was reportedly abundant in a rocky intertidal community at Paitilla Beach, Panama City, near the Pacific end of the Panama Canal (in 1972, Reimer 1976).

Diadumene leucolena has a column which appears smooth from a distance, but is studded with small dark bumps when looked at closely. When extended, the column of the polyp is 2-5X the width. Some specimens reach 38 mm in height and 12 mm in width. This anemone has acontia, threadlike structures, lined with cnidocytes (cells bearing nematocysts) which extend from the middle lobes of incomplete mesenteries, which partially divide the gastrovascular cavity. The acontia can be extended into the body cavity, or extruded through pores, as a defense in response to disturbance or handling. There are 40-60 tentacles, and there is a substantial tentacle-free zone around the mouth. The tentacles are long and slender when extended. This anemone is usually whitish and translucent, tinted with pale pink, orange, or olive (description from: Gosner 1978; Carlton 1979; Cohen and Carlton 1995; Fautin, in Carlton 2007).

Most sea anemones of the genus Diadumene can reproduce sexually by releasing eggs and sperm into the water, and asexually by longitudinal fission, or by a method called pedal laceration. In pedal laceration, as the anemone moves, a portion of its base is left behind, and grows into a new anemone (Barnes 1983). However, in D. leucolena, asexual reproduction appears to be rare or absent, at least in native populations in East Coast estuaries (Shick and Lamb 1977). Shick and Lamb (1977) suggest that the dominance of sexual reproduction and genetic variation helps the persistence of populations during highly variable conditions, which may completely wipe out clonal populations, such as those of the asexual D. lineata. Hand (1956) suggested that this was also true for West Coast D. leucolena, based on the regular arrangement of the mesenteries, which is disrupted during longitudinal fission.

This anemone is known from estuaries and sheltered waters, where it grows on oysters, rocks, seaweeds, pilings, and floats (Gosner 1978; Carlton 1979; Cohen and Carlton 1995; Casey 1997; Cohen 2005). It can also occur in sheltered tide pools, especially those receiving some freshwater inflow (Fofonoff, personal observations). It is especially tolerant of variable salinity and occurs at salinities as low as 6-7 PSU (Pierce and Minasian 1974; Shick and Lamb 1977; Gosner 1978; Casey 1997). Like other anemones, it feeds by trapping zooplankton and small epibenthic animals with its tentacles (Barnes 1983).

Diadumene leucolena has no reported impacts in its introduced range.

Ocaña, Oscar; Den Hartog, J.C. (2002) A catalogue of Actiniaria and Corallimorpharia from the Canary Islands and from Madeira, Arquipelago. Life and Marine Sciences 19A: 33-54.

Reimer, A. A. (1976) Description of a Tetracfita stalactifera panamensis community on a rocky intertidal Pacific shore of Panama., Marine Biology 35: 225-238