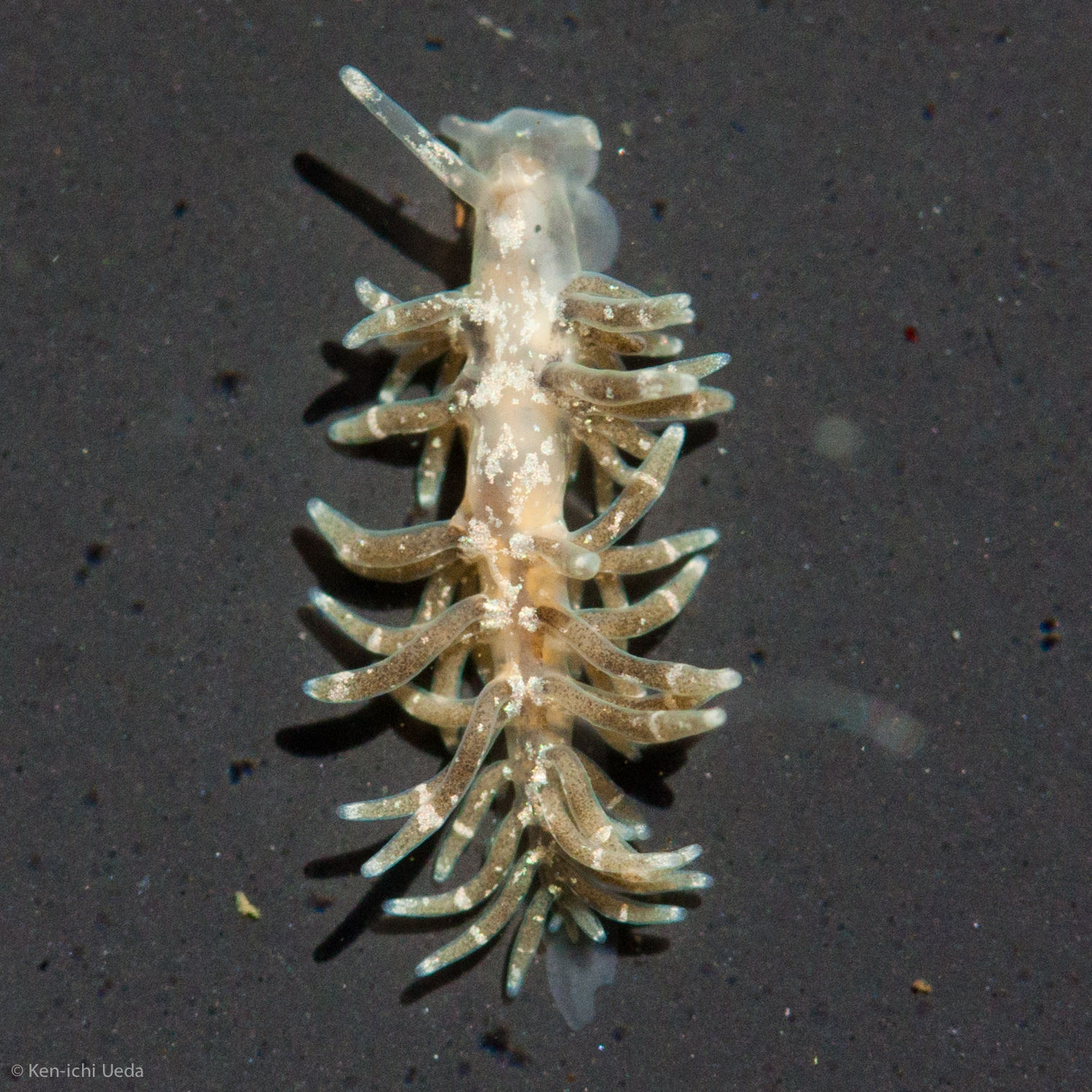 Cuthona perca is a nudibranch commonly known as the Lake Merritt Aeolis. It is thought to be native to the Western Atlantic, but scattered global records make it difficult to determine its definitive native range. Records are known from Brazil, the Caribbean, Florida, South Carolina, Virginia, Italy, the Black Sea, Ghana, California, Hawaii, Japan, and New Zealand. In California, it is known from only one location (Lake Merritt, San Francisco Bay) and is considered introduced. It has been reported from lagoons, estuaries, and harbors in warm-temperate to tropical regions and is often found on rocks, piers, floating docks, and boat hulls. No ecological or economic impacts have been reported for this species throughout its range.

Image Credit: Ken-ichi Ueda via Flickr and the CC BY-NC 2.0 License. This image was not altered.

Cuthona perca is often considered native to the tropical Western Atlantic, but a number of scattered global records calls that assumption into question (Ruiz et al. 2000). It was first collected and described in Brazil (Marcus 1958) and is found north through the Caribbean, including Colombia (Marcus 1976) and Jamaica (Edmunds 1964) to Florida (Marcus 1972; Gosliner 1979), South Carolina (Fox and Ruppert 1985), and Chesapeake Bay (Ruiz et al. 2000). In the eastern Atlantic, it has been found in Ghana (Marcus 1977), where it was probably carried in fouling on ships from the Caribbean (Edmunds 1975; Edmunds 1977). It has also been found in the Lagoon of Venice in the Mediterranean (Perrone 1995) and the Black Sea (Martynov et al. 2007). In the Pacific, C. perca is known from California (Carlton 1979; Cohen and Carlton 1995), Hawaii (Gosliner 1979), Japan (Iwasaki 2005), and New Zealand (Miller 1977, as C. reflexa). Cuthona perca is potentially transported in fouling and ballast water, and tolerates a wide range of temperature and salinity.

On the West Coast, Cuthona perca is known only from Lake Merritt, California where it was found in 1967 (Behrens 1991). Lake Merritt is a tidal lagoon in Oakland, on San Francisco Bay. In the lagoon, C. perca feeds on the introduced anemone Diadumene lineata (Carlton 1979; Cohen and Carlton 1995).

Cuthona perca was first found in Biscayne Bay, near Miami, Florida in 1969 (Marcus 1976). It was later collected in North Inlet, South Carolina where it was associated with the hydroid Pennaria disticha (Fox and Ruppert 1985; Fernando and Kemp 2007). In 1994, it was found on fouling plates at several locations in Norfolk and Lynnhaven, Virginia. It has also been collected at Yorktown, Virginia where it was locally abundant on the introduced anemone Diadumene lineata (Ruiz et al. unpublished data). Its absence in Vogel's (1977) survey indicates that it may be a recent introduction to the Chesapeake.

In 1975, Joseph L. Simon reported collecting this nudibranch in St. Petersburg, Florida (Gosliner 1979). We have no further records, but presume that it is still established.

In 1972, Cuthona perca was collected on floating docks in Kaneohe Bay, Oahu, associated with the sea anemone Aiptasia pulchella (Gosliner 1979; Carlton and Eldredge 2009).

As noted above, Cuthona perca was described from Brazil, near Cananéia (Sao Paulo state), in lagoons adjacent to the Atlantic Ocean (Marcus 1958; Marcus 1977). It was later collected in Santa Marta, Colombia (Marcus 1976) and Jamaica (Edmunds 1964). These records, together with those from Florida, South Carolina and Virginia, are suggestive of native status in the Western Atlantic, but the scattered global records make it difficult to determine its definitive native range. This sea-slug was first collected in the Eastern Atlantic, in Ghana, Africa, in 1975, where it reportedly only occurred on boat hulls (Edmunds 1977). In 1977, a single specimen was found in the Lagoon of Venice, and later identified as C. perca. No further records are known form the Mediterranean (Perrone 1995; Crocetta 2012). However, in 2007, an established population was found in Sevastopol Bay, Ukraine, on the Black Sea: 'intertidal under stones, within old pier'. The animals were feeding on unidentified sea anemones and producing numerous egg masses (Martynov et al. 2007).

Cuthona perca is a slender nudibranch which tapers posteriorly. The tail of illustrated specimens varies in size, from about 10 to 25% of the body length. The body length ranges from 3 to 15 mm. The head is rounded and widened laterally, with oral tentacles that are about 10% of the body length. The rhinophores are slightly longer, and smooth, located in front of a pair of small black eyes. The cerata (dorsal and lateral projecting structures) are spindle-shaped and can be up to 25% of the body length. They form about 8-10 rows, with up to 16 cerata in clusters on each side, decreasing posteriorly. The penis bears a short stylet. The color of the translucent body is light orange to yellowish or off-white, with scatterings of opaque white and black flecks. The core of each cerata is olive-green to reddish-brown with a white tip. Cuthona perca lays its eggs in a kidney-shaped mass, containing about 100 eggs, fastened to a substrate by a stalk (Marcus 1958). Description from: Gosliner 1979; Behrens 1991; Martynov et al 2007.

Miller (2004) argued that the genus Cuthona should be restricted only to the original type species of the genus, C. nana. Based on differences of digestive morphology, he argued that the rest of the species of the genus should be moved to the genus Trinchesia, but this name is not yet universally accepted. This name is used by some authors (e.g. Martinov et al. 2007). The Integrated Taxonomic Information System treats both names as valid (ITIS 2014).

Cuthona reflexa
Cuthona reflexa (Miller 1977) from New Zealand was incorrectly synonymized by Gosliner (1979) and redescribed as a distinct species by Miller (2004).

Cuthona perca is a nudibranch known from estuaries and coastal habitats, including brackish waters. Nudibranchs are simultaneous hermaphrodites and copulate reciprocally or unilaterally. Cuthona perca lays its eggs in a gelatinous mass, attached to a hard substrate. Unhatched veligers rotate inside the eggs which is characteristic of planktotrophic veligers (Martynov et al. 2007). In Brazil, eggs hatched in 8 days at 23-25°C.

Cuthona perca has been reported from lagoons, estuaries, and harbors of warm-temperate to tropical regions. Substrates include rocks, piers, floating docks, and boat hulls (Marcus 1958; Carlton 1979; Gosliner 1979; Martynov et al. 2007). This nudibranch has been found on the introduced Striped Anemone (Diadumene lineata) in Merritt Lagoon (Carlton 1979), on the anemone Aiptasia pulchella in Hawaii (Gosliner 1979), on an unidentified anemone in the Black Sea (Martynov et al. 2007), and on the hydroid Pennaria disticha in South Carolina (Fox and Ruppert 1985). Many nudibranchs which feed on cnidarians, ingest the nematocysts (stinging cells) and incorporate them into their cerata as a defensive mechanism (Barnes 1983). This is probably the case in C. perca.

No ecological or economic impacts have been reported for Cuthona perca.

Edmunds, Malcolm (1964) Eolid mollusca from Jamaica, with descriptions of two new genera and three new species., Bulletin of Marine Science of the Gulf and Caribbean 14(1): 1-32

Gosliner, Terence M. (1979) The systematics of the Aeolidacea (Nudibranchia: Mollusca) of the Hawaiian Islands, with descriptions of two new species., Pacific Science 33(1): 37-77

Miller, M. C. (2004) An appraisal of the identity of the New Zealand species of the aeolid nudibranch family Tergipedidae (Gastropoda: Opisthobranchia)., Journal of Natural History 38: 1183-1192