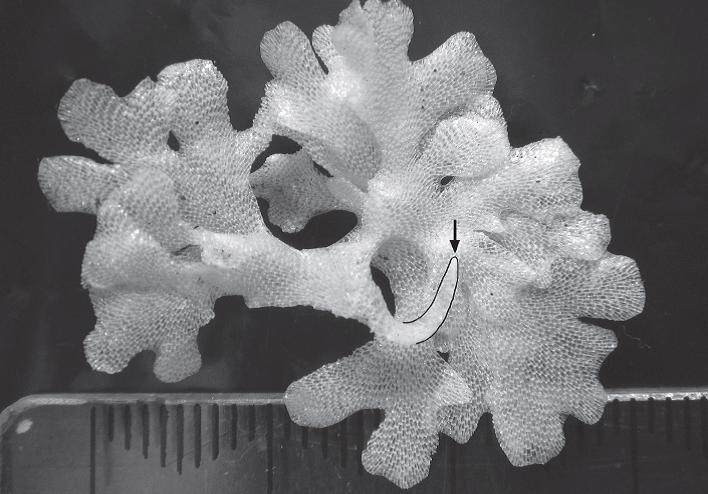 Membraniporopsis tubigerum initially forms encrusting, circular colonies, but as it grows it produces erect, lightly calcified two-layered fronds. It was first described from Florida, Texas and Puerto Rico, but as suggested by other authors, we suspect that it may be native to the Northwest Pacific where it was reported from the Sea of Japan, Russia. Introduced populations have been reported in Uruguay, Brazil, Australia and New Zealand. The preferred habitat of M. tubigerum is unclear – it has been found on fouling plates and on algal fronds, but is most often seen in immense drifts washing ashore on sandy beaches. In New Zealand and South America, this species can clog fishing nets and disturb the aesthetic of recreational beaches when it washes up in large, smelly masses.

Membraniporopsis tubigerum was first described (as Conopeum tubigerum), from Puerto Rico, Florida, and Texas (Osburn 1940). However, it is now considered to belong to the genus Membraniporopsis, whose other two members are East Asian (Huang 2001; Gordon et al. 2006). It was reported as an introduced species in the Sea of Japan, Russia (as C. tubigerum, Kubanin 1977, cited by Lopez Gappa et al. 2010). We suspect that it will be found growing in waters further south, around China and Japan, and it may be native to the Northwest Pacific, as suggested by Gordon et al. (2006). The preferred habitat of M. tubigerum is unclear - it has been found on fouling plates (Allen 1953) and on algal fronds, but is most often seen in immense drifts washing ashore on sandy beaches (Gordon et al. 2006; Lopez Gappa et al. 2010).

Osburn described Membraniporopsis tubigerum (as Conopeum tubigerum) using material from Captiva Island, in Charlotte Harbor, Florida (USNM 11851, US National Museum of Natural History 2010, Osburn 1940; Gordon et al. 2006), and from Port Lavaca and Kingsville, Texas, on Matagorda Bay (Osburn 1940. Gordon et al. 2006). We have no recent data on the abundance of this bryozoan in the Gulf of Mexico, but assume that it is still established.

In the Southwest Pacific, M. tubigerum was found on fouling plates in Townsville, Queensland, Australia (Allen 1953), although we have no more recent records. In New Zealand, this bryozoan appeared in large quantities in fish nets and beach drift in 2001 around Kaipara Harbor, North Island, New Zealand. It was very abundant in 2001-2002, but has not been seen in New Zealand since (Gordon et al. 2006).

Membraniporopsis tubigerum initially forms encrusting, circular colonies, but as it grows it produces free, erect, lightly calcified two-layered fronds, which curl and overlap, growing to 60 mm in height and width. The central part of the frond is tapered to the point of attachment, and many branches arise above it. The two layers of zooids on the frond are not arranged back-to-back, but grow somewhat independently of each other. The colonies are pale creamy-white (Gordon et al. 2006).

The ancestrula is subcircular, ~0.26 mm X 0.21 mm in size. The opesia are large, and occupy ~75% of the length of the ancestrula, surrounded by a smooth gymnocyst and a very narrow, smooth cryptocyst. Hooked spines arise from the opercular region, and a pair of zooids are budded distally (Gordon et al. 2006). The periancestrular zooids (budding off around the ancestrula) generally become longer in relation to their width, with increasing distance from the ancestrula. The proximal part of the gymnocyst is reduced as the zooids become more elongated, but the cryptocyst tends to be moderately developed, forming a shelf, usually granular in encrusting zooids, but smooth in erect zooids. Encrusting zooids are 0.34-0.51 mm X 0.12-0.30 mm in size, while erect zooids tend to be longer and narrower (0.36-0.58 mm X 0.15-0.26) (description from Gordon et al. 2006).

Life History- Membraniporopsis tubigerum colonies start out as encrusting, but become erect colonies composed of many individual zooids (Gordon et al. 2006). The zooids feed by extending the ciliated tentacles of the lophophore as a funnel, creating a current, and driving food particles into their mouths. The food is guided along the tentacles and through the pharynx by the cilia. Larger food particles can be moved or captured by flicking or contracting the tentacles (Barnes 1983). The larval mode of M. tubigerum is unknown. Larvae settle on a substrate and metamorphose into the first zooid of a colony, an ancestrula (Barnes 1983).

Ecology- The preferred habitat of M. tubigerum is unclear- it has been found on fouling plates (Allen 1953) and on algal fronds, but is most often seen in immense drifts washing ashore on sandy beaches, or in large quantities in trawls. However, it has not been found encrusting stones or shells in trawls or on beaches (Gordon et al. 2006; Lopez Gappa et al. 2010).

Membraniporopsis tubigerum is known for occurring in vast masses on sandy beaches and sandy-muddy bottoms in New Zealand and South America (Uruguay-Brazil), clogging fish nets and washing up in large, smelly masses on recreational beaches (Gordon et al. 2006; Lopez Gappa et al. 2010). These types of impacts have not been reported from US waters of the Gulf of Mexico and Puerto Rico, the type locality of the species.