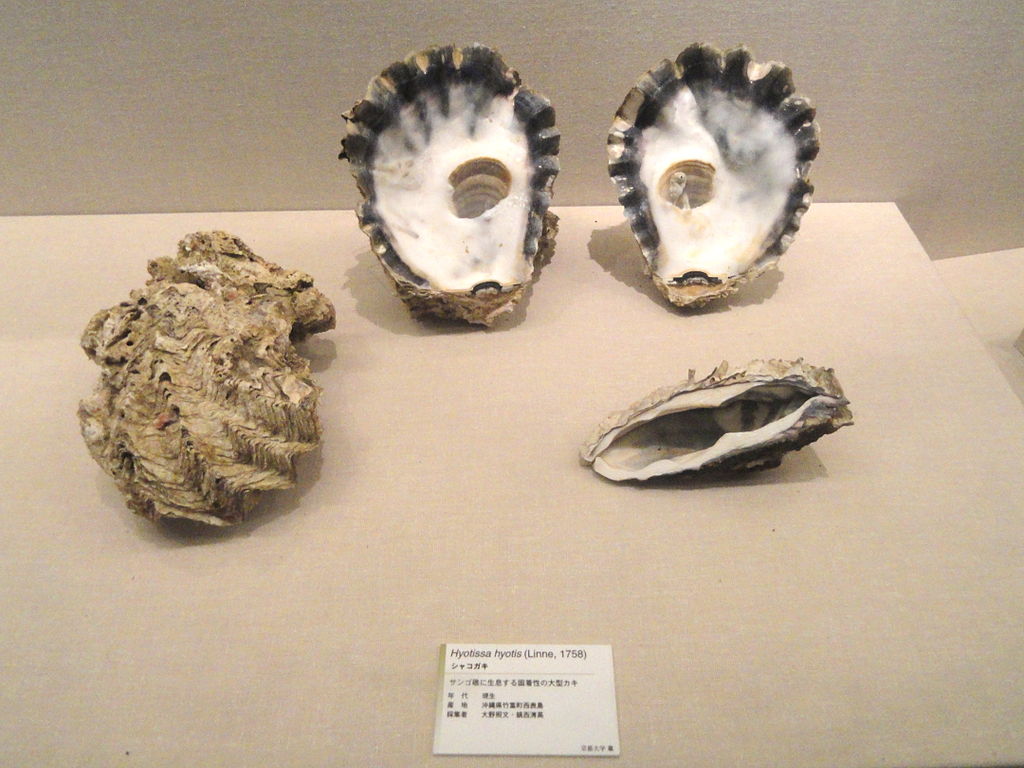 Hyotissa hyotis is commonly known as the Giant Coxcomb Oyster. It has a wide native range in the Indian and Pacific oceans, spanning from the Red Sea and southern South Africa, to northern Australia, Hawaii, and the eastern Pacific from Mexico to Ecuador. Introduced specimens have been reported from the Florida Keys and New Zealand. It is found on tropical rocky shores, coral reefs and shipwrecks in warm, high-salinity environments. This species has no reported impacts in its introduced range.

Hyotissa hyotis has a very wide native range, in the Indian and Pacific oceans from the Red Sea and southern South Africa, to northern Australia, Hawaii, and the eastern Pacific from Mexico to Ecuador (Bieler et al. 2004; Duprat-Bertazzi and Garcia-Dominguez 2005; Academy of Natural Sciences of Philadelphia 2010; Stella et al. 2010; Tan et al. 2010; US National Museum of Natural History 2010). It had been reported in earlier literature from the Atlantic, but the Atlantic form was recognized as a distinct species (H. mcgintyi) in 1985 (Harry 1985, cited by Bieler et al. 2004), although some authors continued to list H. hyotis from the Atlantic. In 2003, genuine specimens of H. hyotis were identified by molecular methods from the Florida Keys (Bieler et al. 2004).

In 2001, a shell, later identified as H. hyotis, was found off West Palm Beach, Florida in the Atlantic Ocean. In 2003, in an investigation of fouling communities on shipwrecks, divers found some exceptionally large attached oysters on the wreck of the RV 'Thunderbolt', near Marathon Key, on the Gulf side of the Florida Keys. The largest specimens were later identified as H. hyotis, using molecular comparisons with specimens from Guam. The native oyster (H. mcgintyi, McGinty oyster) was also found on the wreck (Bieler et al. 2004). Subsequent collections of H. hyotis were made on the wreck of the USGC Cutter 'Duane,' off Key Largo, and on the wreck of the freighter Eagle in the Florida Keys National Marine Sanctuary, both in 2005, on the Atlantic side of the keys. This oyster is considered established in the Florida Keys (USGS Nonindigenous Aquatic Species Program 2011).

Hyotissa hyotis was reported from New Zealand, on the hull of a wrecked fishing vessel 10 nautical miles off Cape Brett on the North Island. This and other fouling organisms on the ship were not considered to be likely to become established (Williams et al. 2008). This oyster was also reported from a shipwreck off Pernambuco, Brazil (Lira et al. 2011). However, it is not clear whether H. hyotis was distinguished from the native H. mcgintyi.

Hyotissa hyotis is a very large oyster, with the two unequal valves. The shape is irregular, according to the substrate and conditions of growth. The animal is cemented to the substrate by the left valve. Both valves are solid and thick. The shell is very deeply ridged, with ridges extending to the shell margin, making it strongly saw-toothed. The arches of the valves interlock. The area of attachment of the ligament has a shallow median groove. The hinge is without teeth. The external coloration of the shell is purplish black, while the interior is bluish-white in the center, and bluish-black towards the margin. There is a single purplish adductor muscle scar, located towards the hinge (Bieler et al. 2004; Stella et al. 2010). Living animals are frequently heavily overgrown with fouling organisms. Hyotissa hyotis has been reported to reach 300 mm in size (Thomson 1954, cited by Duprat-Bertazzi and Garcia-Dominguez 2005), although other authors give maxima of 102 (Stella et al. 2010) and 180 mm (Bieler et al. 2004).

Hyotissa mcgintyi
This Western Atlantic native oyster (McGinty Oyster) was frequently confused in older literature with its Indo-Pacific relative H. hyotis, but was identified as a distinct species. Recently, in a molecular study of that species, specimens of H. hyoti were discovered in Florida (Bieler et al. 2004).

This oyster is widespread on tropical rocky shores, coral reefs and shipwrecks. It appears to be limited to warm, high-salinity environments (Bieler et al. 2004; Duprat-Bertazzi and García-Domínguez 2005; Academy of Natural Sciences of Philadelphia 2010; Stella et al. 2010; Tan et al. 2010; US National Museum of Natural History 2010). It is frequently encrusted with fouling organisms, including other oysters (Bieler et al. 2004).

Hyotissa hyotis is an important local fisheries species in its native range, because of its large size and good flavor. However, it does not appear to be cultured or deliberately introduced in other locations (Duprat-Bertazzi et al. 2010). This species has no reported impacts in North American waters.