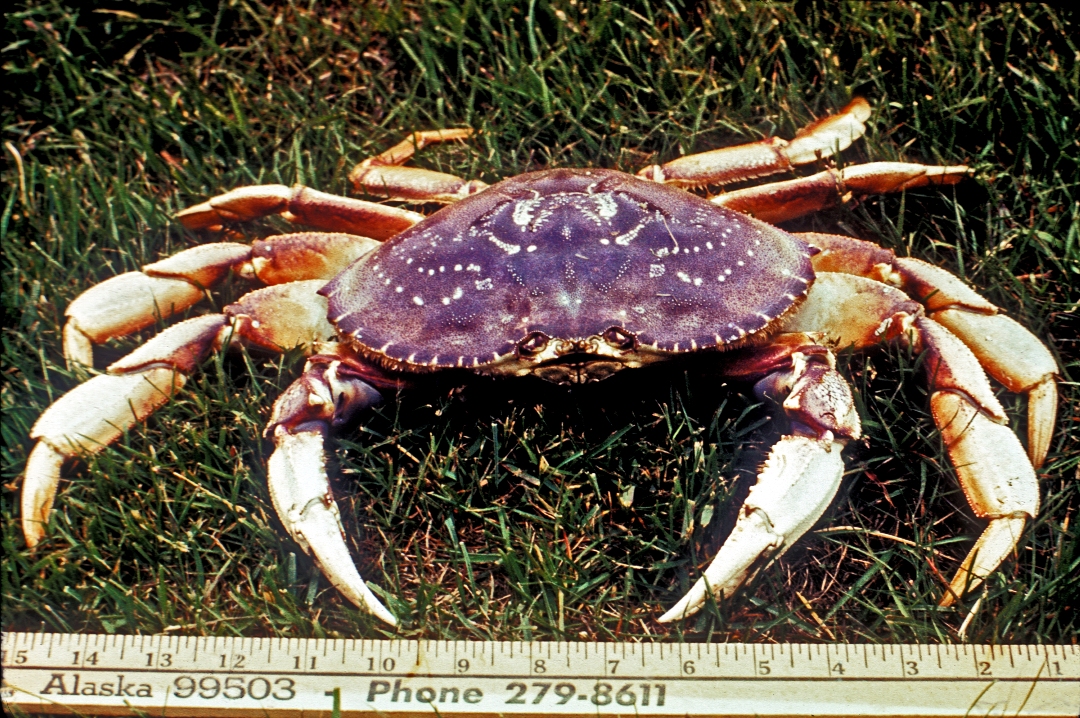 Metacarcinus magister, formerly Cancer magister, is commonly known as the Dungeness Crab. It is native to the Northeastern Pacific, from Alaska to Mexico, but is scarce south of Point Conception, California. Throughout this range, M. magister is an important food item, being heavily fished and widely shipped. Only three introduced specimens have been found, two in the Gulf of Maine and one in Japan. No ecological or economic impacts have been reported.

Metacarcinus magister is native to the Northeastern Pacific, from Unalaska Island, Alaska to Mexico, but is scarce south of Point Conception, California (Pauley et al. 1989). Throughout this range, it is a major commercial and recreational fishery item.

Only two specimens of M. magister have been found in the Atlantic Ocean, both in rather deep water in the Gulf of Maine, off Massachusetts. The first specimen was trapped on July 19, 2006 off Thatcher Island, Gloucester, in 82 m of water. The second specimen was captured a mile south of Magnolia, Essex County, in Massachusetts Bay, at a depth of 37 m (Prybot 8/21/09). Both specimens were adult males, and their occurrence on the Massachusetts coast is linked to the fishery in the Pacific Northwest that ships large numbers of live adult male Dungeness crabs to Boston markets.

Metacarcinus magister has a broadly oval carapace, with the edges uneven, but not highly sculptured. Its eyestalks are short. The carapace is armed with ten lateral teeth, smoothly angled, including the orbital tooth (beside the eye). The body is widest at the tenth tooth, which is large and projecting. The fingers of the claws are about the same color as the rest of the body, and are not dark. The carpus (wrist) has a strong inner spine. The color of the carapace is beige to light brown with blue edges, and is darkest towards the front. The underside of the crab ranges from light orange to light gray-purple, while the inner sides of the legs and claws are crimson. A typical adult (the type specimen) is 120.7 mm long x 177.8 mm wide (Pauley et al. 1989).

This species was assigned to the genus Metacarcinus, together with two other West Coast species, M. gracilis (Graceful Rock Crab) and M. anthonyi (Yellow Rock Crab) by Schweitzer and Feldmann (2000) in a revision of the family Cancridae. The Red Rock Crab of the West Coast (C. productus) and the two East Coast rock crabs (C. irroratus, Rock Crab; C. borealis, Jonah Crab) remain in the genus Cancer.

Life History- In crabs of the family Cancridae, the male attends the female before molting, and carries the female around, underneath his carapace. He releases the female, allows her to molt, and then copulates with her, inserting the first pair of pleopods, carrying sperm, into the female's seminal receptacles. The eggs are fertilized internally, and then extruded as a 'sponge' or a mass of eggs brooded between the abdomen and the body (Barnes 1983). The eggs hatch into zoeae, larvae about 1 mm in size and armed with long spines, which drift in the plankton. Each zoea goes through five molts, and eventually molts into a postlarval megalopa, with prominent eyes and partially developed appendages. The megalopa molts into a miniature 'first crab' which has all the features of an adult crab, and is capable of crawling on the bottom (Barnes 1983).

Ecology- Mating of Metacarcinus magister occurs in inshore waters, but the zoeae tend to drift into coastal ocean waters. The megalopae move inshore and the juveniles are common in eelgrass beds, oyster and clam beds, and estuaries. Adults tend to move into deeper, offshore waters (Pauley 1989).

Dungeness crabs are an important food item in the Northeast Pacific, and are heavily fished and widely shipped. However, only three introduced specimens are known, and no ecological or economic impacts have been reported.

Rathbun, Mary Jane (1897) Synopsis of the American Sesarmae, with description of a new species., Proceedings of the Biological Society of Washington 11: 89-92