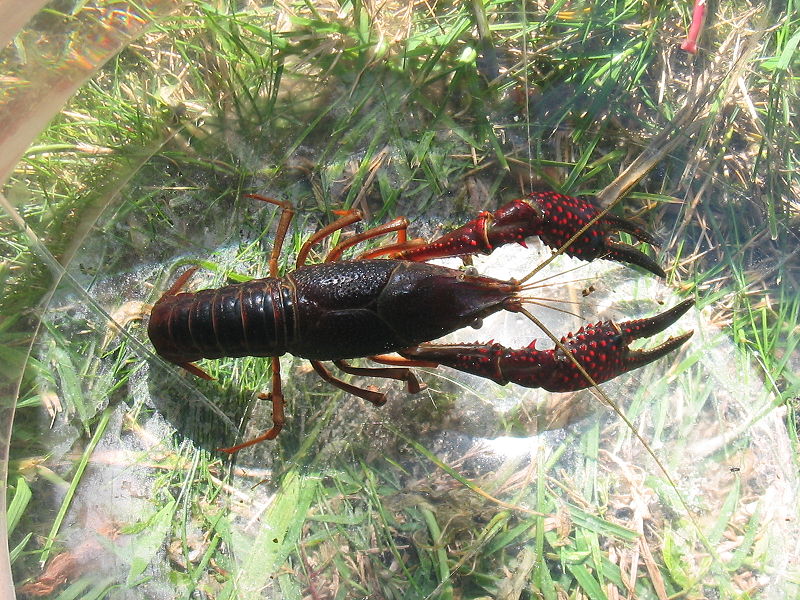 Procambarus clarkii, also known as the Red Swamp Crayfish, is native to the Mississippi and Gulf of Mexico drainages, from Florida, Mexico and New Mexico north to Ohio and Illinois. It is widely distributed around the globe and has been introduced to every continent except Antarctica. It has established non-native populations in the United States, France, Italy, Spain, Portugal, Japan, China, Taiwan, Kenya, and Brazil, among other countries. It is primarily found in marshes, swamps, and slow-flowing rivers, and is tolerant of hypoxic conditions, poor water quality, and salinities up to 20 PSU. It can have negative ecological impacts by competeing with native crayfish species and altering natural habitats.

Procambarus clarkii, the Red Swamp Crayfish, is native to the Mississippi and Gulf of Mexico drainages from Florida, Mexico (the Rio Grande/Rio Bravo basin), and New Mexico north to Ohio and Illinois (Hobbs 1989; Campos et al. 1992). It is primarily found in marshes, swamps, and slow-flowing rivers, and is tolerant of hypoxic conditions, poor water quality, and salinities up to 20 PSU (Huner and Barr 1991). It is now the most cosmopolitan crayfish species. Procambarus clarkii was listed as being introduced in 12 states by Hobbs et al. (1989) and 14 states by Taylor et al. (1996). Currently, it is introduced and established in at least 21 US states (Cooper et al. 1998; Taylor et al. 1996; Lieb et al. 2011; USGS Nonindigenous Aquatic Species Program 2011). This crayfish is widely cultured as food, and sometimes used as bait, an aquarium pet, or a laboratory animal for teaching and research (Huner and Barr 1991; Hobbs et al. 1989; Larson and Olden 2008). It has been introduced into every continent except Antarctica. It is well established in France, Italy, Spain, Portugal, Japan, China, Taiwan, Kenya, and Brazil, among other countries (Hobbs et al. 1989, Huner and Barr 1984; Huner and Barr 1991; Taylor et al. 1996; Kawai and Kobayashi 2005).

Procambarus clarkii was introduced to California by 1924 near Pasadena, and was reared near San Diego in 1932 (Riegel 1959; Cohen and Carlton 1995). By 1959, P. clarkii was widely established in California non-tidal watersheds. It was found in the watershed near the Sacramento San Joaquin Delta (Riegel 1959), and was established by 1966 (Hazel and Kelly 1966, cited by Cohen and Carlton 1995). Two records in or near tidal wetlands are from Tembladero Slough near the Salinas River mouth and Monterey Bay (Riegel 1959) and from the Sweetwater River National Wildlife Refuge at the head of San Diego Bay (2005, USGS Nonindigenous Aquatic Species Program 2011).

Isolated collections of Procambarus clarkii are known from interior watersheds in New England and New York, the Sebasticook River between Benton and Burnham, Maine, and from private ponds in Rhode Island (1 specimen, Crocker 1979), Long Island and the lower Hudson Valley (USGS Nonindigenous Aquatic Species Program 2011). Red Swamp Crayfish have been collected in or near tidal wetlands in the Delaware River, Chesapeake Bay, and North Carolina estuaries (Cooper et al. 1998; Kilian et al. 2009; Lieb et al. 2011). They are known to be introduced and present in South Carolina, Georgia, and Florida (Huner 1986; USGS Nonindigenous Aquatic Species Program 2011), but specific records from estuarine areas are not available.

Chesapeake Bay- Procambarus clarkii was first introduced to the Chesapeake Bay watershed in 1963, in the Patuxent National Wildlife Refuge. It is now common in the freshwater portions of the lower Patuxent watershed (Arnold Norden 1995, personal communication; Kilian et al. 2009; Kilian et al. 2010). In 1981, the Worcester County Soil Conservation Service began trials of crayfish aquaculture on the Eastern Shore of Maryland (Associated Press 1986; Kilian et al. 2009). In 2007, established populations of P. clarkii were found at 33 locations in the Chesapeake Bay watershed, most of them near seven known crayfish aquaculture operations (Kilian et al. 2009). The distribution of P. clarkii is not well-known in Virginia, but one specimen was collected in 1972 in the York-Pamunkey drainage (USNM 133668), and another in the Potomac watershed in 1992 (USNM 192902, US National Museum of Natural History 2011), both within about 5 km of tidal waters.

North Carolina Estuaries- Huner (1986) listed North Carolina as one of many states to which P. clarkii had been introduced, but gave no details. In 1997-1998, Cooper et al. (1998) collected P. clarkii in many Coastal Plain locations, including two which appear to be in or near tidal wetlands (Horsepen Swamp, Pamlico River drainage and Wilmington, Burnt Mill Creek, a tributary of the Cape Fear River tributary). Additional North Carolina records are reported by the USGS Nonindigenous Species Program (2011), and indicate that this crayfish is widespread in tributaries of Albermarle and Bogue Sound.

Procambarus clarkii is native to the Gulf Coast from the Rio Grande, Mexico and the Rio Bravo, Texas to the Pensacola Bay drainage in Florida (Hobbs 1989; Huner and Barr 1991). This crayfish has been introduced to Pasco County, north of Tampa Bay (in 1955, Franz and Franz 1990; Taylor et al. 1996), and probably occurs elsewhere on the Florida Peninsula.

Crayfish (initially thought to be Pacifastacus leniusculus, Signal Crayfish) were introduced from California to Oahu, Hawaii in 1923 and 1927. In 1937 and 1939, 3,225 crayfish were transplanted from Oahu to the islands of Hawaii and Maui. These crayfish were apparently all Procambarus clarkii, and are now found on all of the major Hawaiian Islands (Brock 1960). This crayfish was collected near areas of tidal influence in a survey of streams in Oahu (Englund et al. 2000).

In Europe, P. clarkii was first introduced to Spain in 1973, where it is now widespread. Populations are most dense in southern Europe (Spain, Portugal, Italy), but scattered populations are found in England, Belgium, Germany, Poland, Switzerland and Austria, as well as the Azores and Madiera (Holdich et al. 2009). Invaded habitats include brackish coastal wetlands in Italy, Portugal, and Spain (Scalici et al. 2010; Invasive Species Specialist Group 2011).

The Red Swamp Crayfish is widespread in Africa (Egypt, Sudan, Kenya, Uganda, Zimbabwe, South Africa) and Asia (Israel, China, Taiwan, Japan, the Philippines) (Hobbs et al. 1989). In Japan, P. clarkii was first imported as food for Bullfrogs (Rana catesbiana) in a private pond in Kamkura City, Honshu in 1922. It is now found in at least 20 bodies of water on Kyuhsu, Honshu, and Hokkaido (Kawai and Kobayashi 2005). Procambarus clarkii was introduced from Japan to Nanjing, China, in 1929, and is now widespread in most provinces across the country. The low genetic diversity of P. clarkii is consistent with a single or very few introductions, and constitutes a 'genetic bottleneck' (Yue et al. 2010).

Procambarus clarkii, the Red Swamp Crayfish, has an ovoid carapace and chelae (claws) covered with tubercles and granules. It has a prominent rostrum, which is strongly triangular with a median keel and a pointed tip. The chelae are large and elongated, and have a large gap at the base of the movable finger. The carpus or wrist joint bears three spines, one very large, on its interior edge. In the males, the 3rd segment (ischia) of the 3rd pair of walking legs bears copulatory hooks. The annulus ventralis (seminal receptacle) of the female is an ovoid structure located between the 4th and 5th pair of walking legs, with a sigmoid (a reverse-S shaped) groove running across the center, and two tubercles at the anterior border. The adults are dark red or reddish-brown, with bright red tubercles and a wedge-shaped black stripe on the abdomen (Riegel 1959). These crayfish mature at 57 to 110 mm. The largest reported specimen, from Kenya, was 160 mm (Huner and Barr 1991).

Life History- Procambarus clarkii is considered a 'tertiary burrowing' crayfish (primary burrowers burrow year-round, secondary burrowers leave the burrow during rainy periods, and tertiary burrowers inhabit the burrow during the breeding season and during droughts, but are found in open water the rest of the year). Freshwater crayfishes, of the family Cambaridae, mate by internal fertilization, with the male inserting pleopods into the females seminal (annulus ventralis) between the 4th and 5th walking legs. The female curls her abdomen far forward, to create a chamber in which the eggs are driven by the pleopods. The mass of eggs becomes attached under the tail. Larval development takes place inside the egg and the young hatch as miniature adults (Barnes 1983).

Male cambarid crayfish show sharp morphological changes with season. At the start of the breeding season, they molt into a sexually competent stage (Form I), marked by lengthening and stiffening of the modified 1st pleopods, more pronounced ischial spines (in the basal segments of the 3rd walking leg) and enlarged chelipeds. After breeding, the crayfish molts back into Form II, with the 1st pleopods less differentiated and soft, ischial spines reduced, and less robust chelipeds (Hobbs 1989).

Ecology- Procambarus clarkii constructs burrows near the water's edge which are usually under 0.5 m in length, but may extend to 4.5 m depending on soil and moisture conditions. Burrows are often partly filled with water, but crayfish are frequently out of the water because of low oxygen concentrations (Correia and Ferreira 1995; Huner and Barr 1984). Overland movements may occur in response to heavy rains, flooding, or anoxia in burrow water (Huner 1989). In the early part of its life, it is found in deeper water (up to two or three feet) in marsh lagoons. As it attains maturity, and the spawning season approaches, it migrates to the shallow water of open marshes (usually less than six inches deep). Culture ponds are usually 0.3-0.7 m deep (Huner and Barr 1991). These crayfish tolerate salinities of 20-30 PSU. In Italy and Portugal, they have become abundant in brackish wetlands and lagoons (Huner and Barr 1991; Scalici et al. 2010).

Fisheries- Due to its large size, hardiness, rapid growth, and prolific reproduction, Procambarus clarkii is the crayfish most frequently cultured, fished, sold, and eaten in the United States and throughout most of its introduced range. It is the 'Crawdad' of Cajun cooking and more than 125,000 acres of land in Louisiana is used for crayfish farming, and more than 10,000 acres in other states (Huner and Barr 1991). In years with normal rainfall cycles, the ratio between farmed and wild-caught crayfish harvests is about 40%:60%, but wild harvest decreases in years with abnormal weather. The farmed harvest in Louisiana is ~ 28,350 tonnes/yr. At an average price of ~ 50 cents/lb, an average total annual harvest for Louisiana is worth on the order of $50 million per year (calculated from Huner and Barr 1991). In China, the harvest was 300,000 tonnes in 2008 (Yue et al. 2010).

Agriculture- The burrowing activity of Procambarus clarkii can damage crops, such as rice and taro, and may weaken earthen irrigation dams and levees. Further, this crayfish may eat some types of crops. Problems are especially great where crayfish are not eaten for cultural reasons (e.g. Japan, Kenya), however, even where there is large-scale harvesting (e.g. Spain, Portugal, China), damage to rice fields is considerable (Brock 1960; Correia and Ferreira 1995; Huner and Barr 1991; Yue et al. 2010). Red Swamp Crayfish are considered a serious pest in rice fields of the Sacramento-San Joaquin Delta (Riegel 1959; Cohen and Carlton 1995).

Habitat Change - Burrowing by P. clarkii has been known to undermine riverbanks, levees, dikes, etc., increasing erosion and suspended sediment. Procambarus clarkii appears to have larger impacts due to burrowing than most other crayfishes, because of its large size and rapid reproduction (Hobbs et al. 1989; Correia and Ferreira 1995; Hobbs et al. 1989). In Lake Navaisha, Kenya, it, together with the introduced fish Cyprinus carpio (Common Carp) is believed to have adversely affected fish habitat through destruction of vegetation and bioturbation, resulting in a decline of the introduced Largemouth Bass (Micropterus salmoides).

Food/Prey- Procambarus clarkii, as a large, introduced crayfish in shallow waters, may be beneficial to some predators. It was deliberately introduced to Patuxent National Wildlife Research Center, Maryland, in 1963, as food for wading birds (Kilian et al. 2009). In the Guadalquivir marshes, Spain, increased feeding on P. clarkii was associated with population increases in 41 species of birds (Tablado et al. 2010). In Lake Navaisha, Kenya, the introduced Largemouth Bass (Micropterus salmoides) initially increased due to feeding on P. clarkii, but later declined, apparently due to decreased water clarity and habitat quality, attributed in part to impacts of P. clarkii.

Jackson, Michelle C. and 5 authors (2012) Population-level metrics of trophic structure based on stable isotopes and their application to invasion ecology, PLOS ONE 7(2): e31757