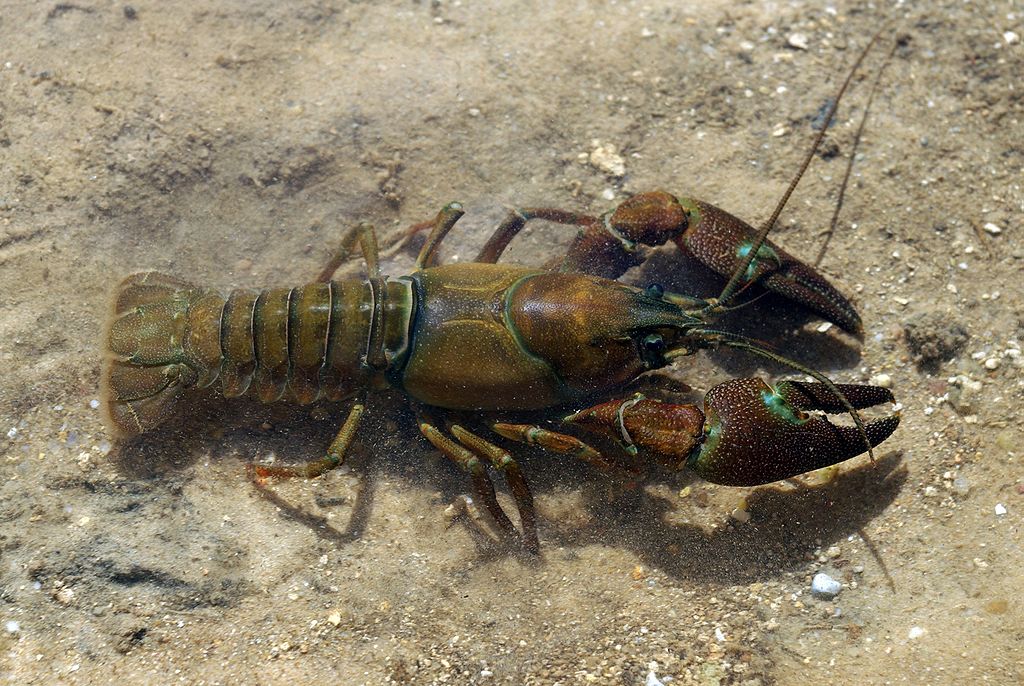 Pacifastacus leniusculus is a freshwater crayfish that inhabits streams, ponds and lakes in a variety of habitats, including rocky, muddy, and vegetated areas. It is tolerant of salinities up to 28 PSU and can be found in river systems near the coast. It is native to northwestern North America from Oregon to British Columbia, and has been introduced to California, Europe and Japan. It is a fisheries species with positive economic benefits, but has had negative impacts as a competitor with native species and as a vector for the spread of the crayfish plague fungus.

Pacifastacus leniusculus is native to northwestern North America from Oregon to British Columbia. The southern boundary of the native range is unclear. Museum specimens from the Klamath and Eel River drainages in Northern California are undated (Taylor et al. 1996; U.S. Museum of Natural History 2007). The Signal Crayfish was introduced to various watersheds in California, including the San Francisco Bay watershed and delta (Cohen and Carlton 1995).

Pacifastacus leniusculus was introduced to various California watersheds, possibly as early as 1898, in San Francisco. An official transplant was made in 1912 to hatcheries in Santa Cruz County, and in later years, they were introduced to the Sacramento-San Joaquin watershed. They were present in the Delta by 1959, and are now abundant (Riegel 1959). Other California locations include the Monterey Bay watershed, and upper reaches of the Sacramento watershed in the Sierras (USGS Nonindigenous Aquatic Species Program 2010). Two records near the coast were from the Carmel River and the Little Sur Rivers, south of Monterey Bay, two and one miles from the ocean, respectively (Riegel 1959).

In 2002, one specimen was caught in the Buskin River on Kodiak Island, Alaska (USGS Nonindigenous Aquatic Species Program 2011). This could have been a bait release.

In the 1860s, the fungus Aphanomyces astaci (Crayfish Plague) spread throughout Europe, killing the native crayfish (Astacus astacus) and other species. This disease was probably brought from North America with crayfish sold as food. Disease-resistant North American crayfish were stocked in many locations. Pacifastacus leniusculus was introduced to Sweden in 1959, and were widely transplanted into northern European freshwaters and are now present from Spain to Finland, with isolated populations in Greece (Holdich et al. 2009). It occurs in the Gulf of Bothnia, Baltic Sea (Olenin and Leppakoski 2000), but the extent to which it inhabits and disperses through estuarine waters is unclear (Holdich et al. 1997). Pacifiastcus leniusculus is established in the upper Danube drainage near Koszeg, Hungary (Puky et al. 2005). It also occurs in the Czech Republic and Austria, but has not been reported from the lower Danube or elsewhere in the Black Sea watershed.

Pacifastacus leniusculus stock from the Columbia River was introduced to Hokkaido and Honshu, Japan, between 1926 and 1930, and it is now widespread, especially in Hokkaido (Uso et al. 2007).

Male crayfish of the genus Pacifastacus (Signal Crayfish) lack hooks on the ischia (3rd segment) of the walking legs, while females lack the annulus ventralis (seminal receptacle), which in cambarid crayfish, is located between the 4th and 5th pairs of walking legs (Hobbs 1991). The margin of the rostrum in P. leniusculus is smooth. The Signal Crayfish matures at 60 mm and occasionally reaches 160 mm. The overall color of the animal is dark brown, but a turquoise and white patch at the base of the claw is distinctive (Riegel 1959; Taugbøl and Johnsen 2006).

Life History- Freshwater crayfish mate by internal fertilization, with the male attaching spermatophores to the space between the 4th and 5th walking legs. The female curls her abdomen far forward, to create a chamber in which the eggs are driven by the pleopods. The mass of eggs becomes attached under the tail. Larval development takes place inside the egg and the young hatch as miniature adults (Barnes 1983).

Ecology- Pacifastacus leniusculus inhabits streams, ponds and lakes in a variety of habitats, including rocky, muddy, and vegetated areas (Taugbøl and Johnsen 2006). If soft sediment is present, it digs burrows. It is tolerant of salinities up to 28 PSU, but females with eggs have not been seen at salinities above 7 PSU (Holdich et al. 1997).

Pacifastacus leniusculus (Signal Crayfish) has had a significant positive economic impact as a fisheries species, but it has had negative impacts as a competitor with native species in California, Europe and Japan. In Europe, it is also a vector for the spread of the crayfish plague (Cohen and Carlton 1995; Usio et al. 2007; Holdich et al. 2009). In Sweden, the estimated cost of impacts from the Signal Crayfish and the crayfish plague was estimated at about 53-88 million US dollars (Gren et al. 2009).

Disease Vector- Pacifastacus leniusculus is a major vector for the spread of the 'Crayfish Plague' fungus, Aphanomyces astaci, which has greatly reduced the abundance and range of native crayfishes in Europe (Lowery and Holdich 1989; Holdich et al. 2009).

Habitat Change- Burrowing by P. leniusculus has been reported to cause erosion at the rate of 1 m per year on the River Lark, England (Stancliffe-Vaughan, 2009, cited by Holdich et al. 2009).

Orlova, M. I.; Kommendatov, A. Yu. (2013) [The use of laboratory populations of the invasive New Zealand mollusk, Potamopyrgus antipodarum (Gastropoda, Hydrobiidae), for assessment of its euryhalinity and physical modelling of invasion in relation to the salinity gradient], Zoologicheskii Zhurnal 92(7): 759-770