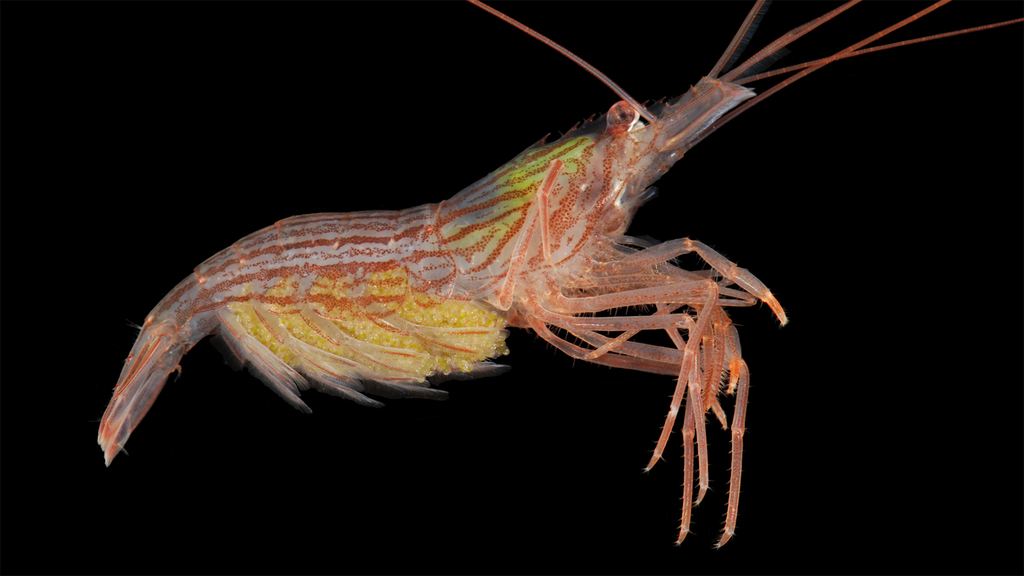 The peppermint shrimp Lysmata vittata (East Asian Lined Shrimp; Red-Striped Shrimp) is part of a widely distributed complex of brightly colored shrimps, some of which regularly display cleaning behavior, removing ectoparasites from fishes. Lysmata vittata is only an occasional cleaner and is more of an omnivore. Historically Lysmata vittata has been reported as ranging widely in the Indo-West Pacific, from the Red Sea south to South Africa to Australia and extending into the temperate Northwest Pacific. However, a recent integrative taxonomic analysis found that Lysmata vittata is a complex of multiple species and the native range of L. vittata sensu stricto likely spans the temperate/subtropical Indo-West Pacific from China to southern Russia. It has been genetically and morphologically identified in lower Chesapeake Bay, where it was collected from 2013 to 2018, at temperatures of 4.5 to 26.5 ºC and salinities of 18.5 to 34.5 PSU. It has also been collected in Great Egg Harbor, New Jersey, Hudson River, New York, and Long Island Sound, Connecticut. It is also established in New Zealand. The likeliest vector is ballast water, although several species marketed as Lysmata vittata are sold in the aquarium trade.  Populations of 'L. vittata' reported from Australia, Thailand, Egypt, Brazil, and Caribbean Panama refer to other, closely related species in the 'L. vittata' complex. However, they may be distributional overlap within the complex in some areas, like Hong Kong.

Note: Robert Aguilar made substantial contributions to this species' entry.

In Chesapeake Bay and adjacent Atlantic waters, Lysmata vittata has been collected from the mouth to south of Tangier Island, the lower reaches of the James and York estuaries, and also in Burtons Bay, a nearby Atlantic embayment. It was collected at temperatures of 4.5 to 26.5 ºC and salinities of 18.5 to 34.5 PSU. Habitats include shallow oyster flats (~1 m) to deeper muddy channels (19.5 m). Lysmata vittata co-occurred with L. wurdemanni at many locations (Aguilar et al. 2022). Specimens of L. vittata have also been collected from Little Egg Harbor, New Jersey, Hudson River, New York, and Long Island Sound, near Norwalk, Connecticut (Robert Aguilar, personal communication; James Carlton, personal communication 2022). Lysmata vittata has also be found in New Zealand near port of Auckland (Ahyong 2010).

The likeliest introduction vector for Lysmata vittata sensu stricto in the United States and New Zealand (as well as L. rauli in Central/South America) is ballast water, although several species marketed as Lysmata vittata are sold in the aquarium trade.

In 2013 to 2018, 139 specimens identified as the Indo-Pacific Lysmata vittata were collected in Chesapeake Bay and in adjacent Atlantic waters, including the mouth of the Bay to south of Tangier Island, the lower reaches of the James and York estuaries, and Burtons Bay, a nearby Atlantic embayment. It was collected at temperatures of 4.5 to 26.5 ºC and salinities of 18.5 to 34.5 PSU. Lysmata vittata co-occurred with L. wurdemanni, a peppermint shrimp native to the East and Gulf Coasts from Long Island Sound to Texas (Williams 1984; Rhyne and Lin 2006), at many locations (Aguilar et al. 2022).  Specimens of L. vittata have also been collected from Little Egg Harbor, New Jersey, and Long Island Sound, near Norwalk, Connecticut, and the Hudson River, New York (Robert Aguilar, personal communication; James Carlton, personal communication 2022).

In 2006, specimens of Lysmata vittata were collected from the east and west coasts of the northern peninsula of the North Island of New Zealand (Ahyong 2010).  The shrimps were collected in marinas in harbor locations (Ahyong 2010).  Records from Egypt (Abdelsalam 2008) and Brazil (Soledade et al. 2013; Alves et al. 2018; Pachellet et al. 2020) are believed to refer to closely related species (Aguilar et al. 2022).

The peppermint shrimp Lysmata vittata (East Asian Lined Shrimp; Red-Striped Shrimp) is one of ~48 named species within Lysmata, which includes obligate cleaner shrimps with distinctive coloration, and free-living omnivorous shrimps. Lysmata vittata is a small shrimp, reaching total lengths of 18–30 mm. The body is semi-transparent, and marked by fine red longitudinal stripes varying in pigment density  Marin et al. 2021a; Aguilar et al. 2022). The rostrum is thin and reaches the second article of the dorsal peduncle. The rostrum has 6–8 dorsal teeth and 2–6 ventral teeth (Aguilar et al. 2022). There is a pterygostomial tooth on the buccal edge of the carapace. The dorsal antennule is uniramous, lacking an accessory branch. The antennule outer edge bears a short stylocerite (spiny process) which reaches the mid-length of the peduncle.  The antennal scale is longer than the peduncle and is three times as long as it is wide (Marin et al. 2012a; Agular et al. 2022). The second pereiopod has 18–23 articles (Aguilar et al. 2022).

Specimens reported from Australia, Brazil, Panama, and Mediterranean Egypt refer to other species once grouped in the Lysmata vittata species complex (Aguilar et al. 2022; Guéron et al. 2022). These species vary in some of the details listed here, including number of pereiopod articles, accessory branch status, or coloration. Some of these correspond to Lysmata rauli (Laubenheimer & Rhyne 2010) described from Brazil), but assumed native to the eastern Pacific , as well as L. cf. rauli also found in Hong Kong and Egypt (Aguilar et al. 2022).


Lysmata rauli has been considered a junior synonym of Lysmata vittata, but Aguilar et al. (2022) and Guéron et al. (2022) clearly show they are distinct and resurrect L. rauli to full species status. Both authors also provide strong evidence that Lysamta rauli is a complex of sister species. Lymata vittata sensu stricto can be distinguished from the Lysmata rauli complex by the lack of both an accessory branch on the dorsal antennule and dark transverse bars on the abdomen.


Native from Florida to Yucatan, with differing spination and setal counts, and oblique and transverse stripes.


Native from Long Island to Yucatan (WoRMS Editorial Board (2022)). Lysmata wurdemanni is distiguished from L. vittata by many features of spination, setation and segmentation. The carapace has large transverse and oblique red bands (Rhyne and Lin 2000).

The peppermint shrimp Lysmata vittata (East Asian Lined Shrimp; Red-Striped Shrimp) is a marine shrimp, native from temperate to subtropical marine waters. In the Chesapeake Bay, it occurred at temperatures of 4.5 to 26.5 ºC and salinities of 18.5 to 34.5 PSU (Aguilar et al. 2022).  In the Pos'yet Bay, Russia and in the Sea of Japan, this shrimp inhabits a cool-temperate location (Marin et al. 2012a).  This shrimp is reported from a variety of habitats, including shallow oyster flats, and deeper muddy channels (Aguilar et al. 2022); boulders on a sandy bottom (Marin et al. 2012a), the 'under-stone' habitat at the edge of coral reefs (Bruce 1976), and algae and stones in tidepools (Bruce 1976).  Aquarium websites describe this species as an omnivorous, occasionally showing cleaning behavior by removing parasites from fishes, and removing pest species such as the anemone Exaiptasia pallida.

The peppermint shrimp Lysmata vittata (East Asian Lined Shrimp; Red-Striped Shrimp) is a protandrous simultaneous hermaphrodite, maturing first as a male, and then reproducing as a functional euhermaphrodite, with an ovotestes producing eggs but still mating as a male (Chen et al. 2019). Juveniles become functional males with a carapace length of 3.7 to 7.5 mm; and at larger sizes, 5.8 to 8.5 mm, become euhermaphrodites with both viable eggs and sperm (Chen et al. 2019). After fertilization, the eggs are extruded and carried below the abdomen. The eggs hatch into a planktonic Zoea 1, and molt and grow through 8 molts to a Zoea IX and then to a megalopa. Each zoeal stage took 3-5 days at 28 ºC, for an overall larval development of 24–40 days (Marin et al. 2012a, Yang and Kim 2010). The megalopa molts into a juvenile before becoming a functional male (Marin et al. 2012; Chen et al. 2019).

Note that Chen et al.’s ‘Lysmata vittata ‘, from Xiamen, China could be Lysmata rauli, or another species. Reproductive studies on verified L. vittata are desirable.

Lysmata vittata has few reported ecological or economic impacts. Shrimp marketed as “L. vittata” are valued in the aquarium trade for their colorful appearance and as a predator on pest anemones (e.g., Exaiptasia pallida) and flatworms (Vaughan et al. 2018; Barton et al. 2020.). However, many of these shrimps may reflect Lysmata rauli or another species and not L. vittata sensu stricto (Aguilar et al. 2022).

Bruce, A. J. (1976) A report on a small collection of shrimps from the Kenya National Marine Parks from at Malindi with notes on selected species, Zoologische Verhandelingen 145(1): 1-72