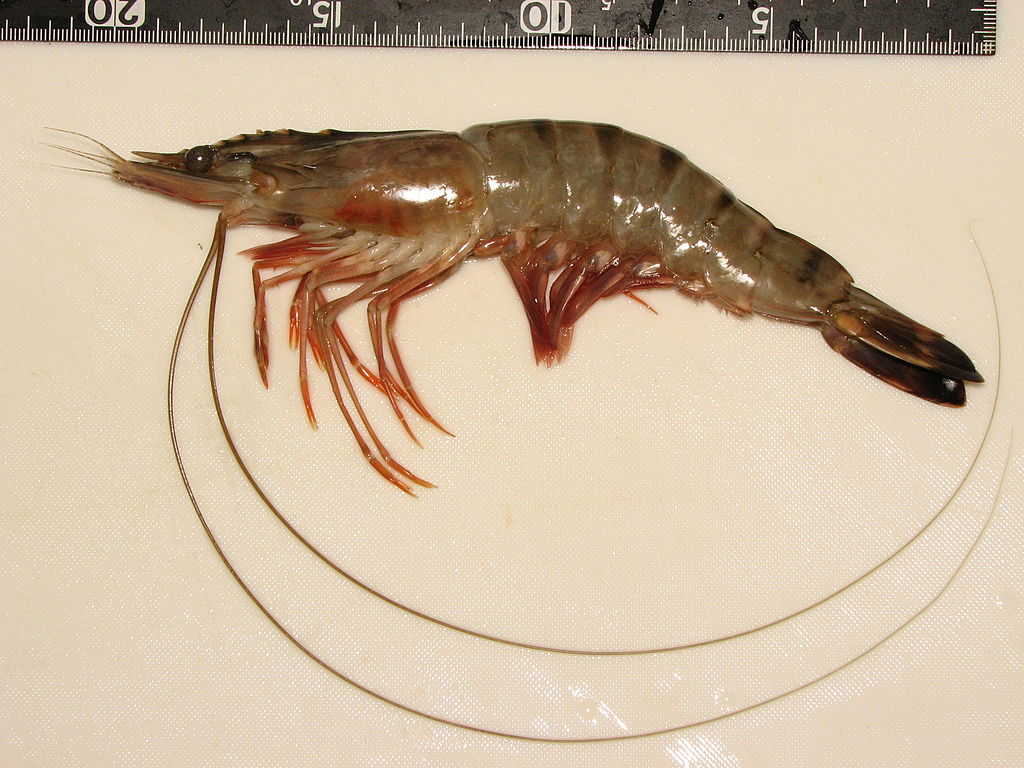 Penaeus monodon, the Asian Tiger Shrimp, has a wide Indo-Pacific native range spanning from the Red Sea and South Africa to Australia, Fiji, and Japan. This shrimp is widely utilized for shrimp aquaculture and has been cultured in a number of countries, including the US, Ecuador, Venezuela, the Dominican Republic, Brazil, and Nigeria. Escapes are frequently reported, and breeding populations are known in Venezuela and Nigeria. This shrimp has been caught along the East and Gulf coasts of the US, and breeding populations are likely, but have not been documented. There are no reported impacts of P. monodon, but this species could compete with native shrimp and may transmit viruses such as the White Spot Virus.

Image Credit: Wikimedia Commons through the GFDL or CC-BY-SA-3.0 License

Penaeus monodon (Asian Tiger Shrimp) ranges widely in the Indo-Pacific from the Red Sea and South Africa to Australia, Fiji, and Japan (Holthuis 1989; Food and Aquaculture Organization 2011). Research on the culture of this species began in the 1970s in China and Thailand, and at FAO (Food and Aquaculture Organization 2011) facilities in New Caledonia. These shrimp were among several species exported to shrimp farms in the Hawaiian Islands in 1978 (Eldredge 1994). They were exported to many different countries for culture, including Venezuela (in 1984, Perez et al. 2007), the US (in 1988, Wenner and Knott 1992), the Dominican Republic (in 1985), and Brazil (in 1981, Tavares 2011). Genetic analyses suggest that shrimps in Colombia are most closely related to populations from the Philippines and Taiwan (Aguirre-Pabon et al. 2015). Escapes are frequently reported, and breeding populations are known in Venezuela (Perez et al. 2007), Colombia (Aguirre-Pabon et al. 2015), Nigeria, and the Gulf of Guinea (Food and Agricultural Organization 2012). According to people in the shrimp industry, Tiger Shrimp are no longer commercially raised in the US, so P. monodon appearing in US waters may be coming from established populations near ongoing or abandoned rearing operations in the Caribbean (Pam Fuller, personal communication). At present, the increasing abundance of P. monodon, and the increasing frequency of juveniles in catches, indicates that breeding populations are established in US waters (Fuller et al. 2014).

In 1988, several hundred thousand postlarval Penaeus monodon, imported from stocks raised in Hawaii, were accidentally released, and about 1,000 juveniles and adults were caught by shrimp fishers from Georgetown, South Carolina to St. Augustine, Florida (Wenner and Knot 1992; Tavares 2011). This shrimp was not reported again in this region until 2006, when it was caught in Pamlico Sound, North Carolina (USGS Nonindigenous Aquatic Species Program 2011). From 2006 through 2012, at least 756 P. monodon were caught from Florida to Cape Hatteras, North Carolina. Most of these were mature adults, but some juveniles (<160 mm) were reported. A majority of these captures occurred off South Carolina (250 specimens) and North Carolina (380), and most occurred in October and November, in commercial trawls. It is probable that a breeding population occurs either on the Atlantic Coast, the Gulf Coast, or both (Fuller et al. 2014).

In September 2006, a specimen of Penaeus monodon was caught in Mississippi Sound near Dauphin Island, Alabama. At least 228 Asian Tiger shrimp have been caught in the Gulf of Mexico from 2006 through 2012. One was caught near the Florida Keys at the Dry Tortugas shrimp grounds in November 2010, and two on the peninsula north of Tampa Bay, and six in Texas, but the rest were found between Mobile Bay, Alabama and Vermillion Bay, Louisiana (USGS Noningigenous Aquatic Species Program 2014; Fuller et al. 2014).  In 2012-2013, nine specimens of P. monodon were collected in Mexican waters, including the southern Gulf, and the Gulf side of the Yucatan Peninsula (Wakida-Kusunoki et al. 2013). It is probable that a breeding population occurs either on the Atlantic Coast, the Gulf Coast, or both (Fuller et al. 2014).

Penaeus monodon was among several species imported to shrimp farms in the Hawaiian Islands in 1978 (Eldredge 1994). Some escapes were reported, but there was no evidence of reproduction (Carlton and Eldredge 2009).

Penaeus monodon was one of the shrimp species widely investigated and used for shrimp aquaculture, but in many locations, it has been supplanted by P. vannamei (Pacific White Shrimp), which is less susceptible to viral diseases and has a higher meat yield. Worldwide production of P. monodon in aquaculture peaked around 1998-2003 at about 50% of the worlds cultured shrimp production, and by 2008 comprised 22% of production (Food and Agriculture Organization 2011; Liao and Chien 2011). Culture of this shrimp was attempted in Ecuador, Venezuela, the Dominican Republic, Brazil, and Nigeria (Coelho et al. 2001; Perez et al. 2007; Santos et al. 2002; Anyanwu et al. 2011; Pam Fuller, personal communication). Established populations are known from Venezuela and Nigeria (Coelho et al. 2001; Perez et al. 2007; Anyanwu et al. 2011). Given the history of this species, it is possible that shrimp from abandoned culture operations have established populations in the Caribbean, and these are the source of the P. monodon appearing in East Coast and Gulf waters.

Penaeus monodon has a well-developed rostrum, which is toothed dorsally and ventrally. The carapace lacks longitudinal or transverse sutures, but cervical (neck) and orbito-antennal grooves and antennal carinae (keels) are always present. Hepatic and antennal spines are pronounced. The most distinct features for identification of this species are: fifth pereiopods (walking legs) without an exopod; the hepatic carina (keel) horizontally straight; and gastroorbital carina (keel) occupying the posterior half of the distance between the hepatic spine and postorbital margin of the carapace. Body color can vary depending on substratum, food availability and water turbidity, ranging among green, brown, red, grey, blue, with alternating transverse blue-black and yellow stripes. Adults may reach 33 cm in length and females are commonly larger than males (Food and Aquaculture Organization 2011). Some of the larval stages of P. monodon are illustrated and described by Juwana and Romimotharto (1987).

Adult Penaeus monodon spawn in the ocean, releasing their eggs into the water. The eggs hatch into a nonfeeding nauplius larva, which lasts about two days, and molts into a zoea stage (4.5 days), a mysis stage (4 days) and a postlarva (15-20 days) (Barnes 1983; Food and Agricultural Organization 2011; stage durations are given for unspecified aquaculture conditions). Postlarvae and juveniles tend to migrate into estuaries, while adults return to the sea for spawning (Food and Agricultural Organization 2011).

Penaeus monodon is apparently established in US waters, with a growing range and population, but its impacts are unknown (Fuller et al. 2014). In its native range, it is an important wild fisheries resource, and is still widely cultured, though it has been partially supplanted by Litopenaeus vannamei (Pacific White Shrimp) in aquaculture (Food and Agriculture Organization 2011; Liao and Chien 2011). Populations of P. monodon, if established, could compete with native shrimps, and could transmit viruses such as the White Spot Virus (Food and Agriculture Organization 2011). Understanding the genetic structure, life history, and parasitology of the expanding Tiger Shrip population will be important in determining its impacts on existing shrimp fisheries and ecosystems (Fuller et al. 2014).