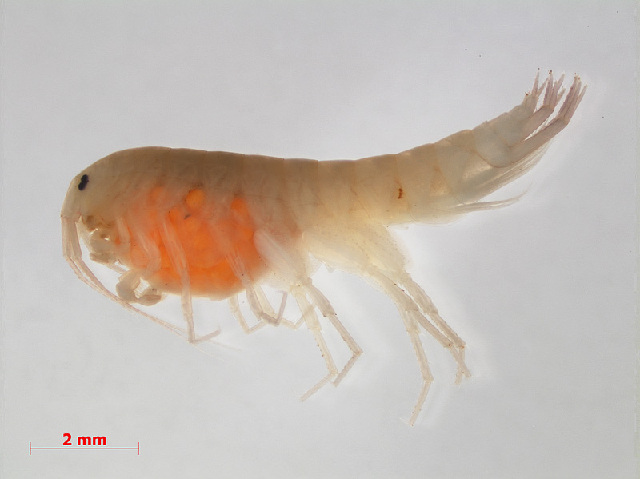 Crangonyx pseudogracilis is a free-living freshwater amphipod. It was described from Ontario, Canada and is native to Eastern North America. It has been introduced to tidal portions of the Columbia River (Washington/Oregon) and freshwater areas of California and Europe (Ireland to Portugal). It has been intentionally introduced to some areas as a food resource for pond and lake fishes. Other possible vectors include recreational boats, ornamental aquatic plants, and canals (in Europe). There are no reported ecological or economic impacts for this species.

Crangonyx pseudogracilis is a freshwater amphipod native to eastern North America. It was described from Ontario by Bousfield (1958). Its range extends through the Great Lakes and Mississippi Basins, and Atlantic watersheds at least as far south as the Missouri and the Delaware Rivers (Bousfield 1958; Bousfield 1973). The southern extent of its native range is obscured by possible confusion with the very similar C. floridanus, which may be synonymous (Sytsma et al. 2004). Crangonyx pseudogracilis has been introduced to tidal freshwater portions of the Columbia River estuary, where it was found in the vicinity of Portland in 2002 (Systma et al. 2004). It has also been reported from creeks in San Luis Obispo County, California, in the watershed of Morro Bay (Bottoroff et al. 2003, cited by Graening et al. 2012), but has not been reported from the estuary yet.

Crangonyx pseudogracilis has also invaded Europe, initially, as a food for pond and lake fishes, in England in 1936, and spreading through fresh waters in Ireland and northern continental Europe, including the Netherlands, Belgium, Germany (Pinkster et al. 1992; Wouters 2002; Gollasch and Nehring 2006), and Portugal (Grabowski et al. 2012). Likely vectors in Europe include fish-stocking, recreational boats, ornamental aquatic plants, and canals.

The date of first collection of Crangonyx pseudogracilis is uncertain, because of taxonomic confusion in this genus (Cordell, in Sytsma et al. 2004). In 2002, it was collected in several sites along the fresh, tidal Columbia River, from Longview, Washington to Portland, Oregon (Sytsma et al. 2004). In 2000-2003, C. pseudogracilis was collected in California in Stenner and Brizzolara Creeks, in San Luis Opisbo, tributaries of Morro Bay (Bottoroff et al. 2003, cited by Graening et al. 2012). However, this amphipod has not yet been reported from the estuary. There are records from the Truckee River, California-Nevada and Arizona (Graening et al. 2012), but morphological and genetic studies are desirable to determine the identity and invasion history of these populations.

Crangonyx pseudogracilis was intentionally introduced to southern England in 1936, as a food for pond and lake fishes, and dispersed as far north as Yorkshire, by 1975, when it was also first collected in Ireland. In 1979, it was collected in the Netherlands, in Groningen Province, and spread widely though the Rhine delta (Pinkster et al. 1992). It is now widespread in freshwaters of Belgium (Wouters 2002) and Germany (Gollasch and Nehring 2006). It occurs occasionally in the brackish harbor of Ghent, Belgium (Boets et al. 2011). In 2011, it was collected for the first time in a freshwater stream in Portugal (Grabowski et al. 2012). In Northern Ireland, predation by other Gammarus species (G. pulex, G. duebeni, G. tigrinus, in descending order of predation rate), limited the distribution of the smaller C. pseudogracilis (MacNeil et al. 2003).

The body of Crangonyx pseudogracilis is moderately compressed and smooth, lacking spines on the urosome segments. Coxal plates 1-4 are deep and lined with short setae, with Coxa 4 being larger, having a slightly convex posterior edge, with a rounded ventro-posterior corner. The head is small, with a rounded anterior lobe and lacking a ventral antennal sinus. The eyes are medium-sized and oval. Antenna 1 is 2X longer than Antenna 2, and bears a 2-segment accessory flagellum, characteristic of the Crangonyctidae.

Gnathopod 1 is smaller than gnathopod 2, but both are subchelate, with the dactyl (segment 7) folding against the propodus (segment 6). Both gnathopds are larger and more robust in males than females. In females, the propodus and carpus (segment 5) are roughly equal, but in males, the propodus of both gnathopods is more than 2X as long as the carpus. The palms of both gnathopods are lined with many spines, which are larger in the male than in the female. Pereiopod 6 is the longest. The posterior ventral corners of the abdominal plates (pleons) end in blunt angles. Uropods 1 and 2 are biramous, with the rami roughly equal, while Uropod 3 has the inner ramus reduced to a scale-like structure. In males, the outer ramus of Uropod 2 is lined with small, comb-like spines. Males have a maximum length of 6.5 mm; females reach 10 mm. Description based on: Hynes 1955; Holsinger 1972, Bousfield 1973, and Chapman 2007.

Crangonyx floridanus
These species might be synonymous (Sytsma et al. 2004)

Crangonyx pseudogracilis is a free-living, freshwater amphipod. Sexes are separate, the young are brooded, and development is direct (Bousfield 1973). In the laboratory, C. pseudogracilis breeds at 5 to 25C, and the egg development time decreased from 66 to 7 days over that temperature range (Sutcliffe and Carrick 1981). In an English river, breeding took place year-round and the monthly average number of eggs per female varied from 25 to 54 (Hynes 1955).

Crangonyx pseudogracilis tolerates a wide range of temperature, tolerating ice covered waters and temperatures at least as high as 25C (Bousfield 1958; Sutcliffe and Carrick 1981). It can tolerate somewhat brackish water, but the upper salinity tolerance is not known (Bousfield 1973; Pinkster et al. 1992). Habitats include rivers, ponds, and lakes, preferring areas that are turbid, weedy, and warm in summer (Bousfield 1958; Bousfield 1973). Crangonyx pseudogracilis is probably omnivorous, like many free-living gammarids, feeding on algae, detritus, and occasionally on invertebrates and carrion (Barnes 1983). Amphipods in culture were fed on shoots of the water plants Elodea, Callitriche, and decaying elm leaves (Sutcliffe and Carrick 1981). Fish and other gammarid amphipods are probably the most frequent predators of C. pseudogracilis. In European waters, 3 species of Gammarus all preyed on C. pseudogracilis (Dick 1996).

Impacts of introduced populations of Crangonyx pseudogracilis have not been reported in North America. In European waters, this amphipod has spread rapidly, and often colonizes marginal pools, polluted waters, and other habitats not used by native amphipods (Pinkster et al. 1992; Piscart et al. 2007). It is smaller than several native and introduced gammarids in Europe, and is prone to predation by them (Dick et al. 1996). However, because of its high fecundity and rapid growth, its appearance in Portugal is considered a threat to several regional endemic species (Grabowski et al. 2012).

MacNeil, Calum, and 5 authors (2003) Parasite-mediated predation between native and invasive amphipods, Proceedings of the Royal Society of London B 270: 1309-1314