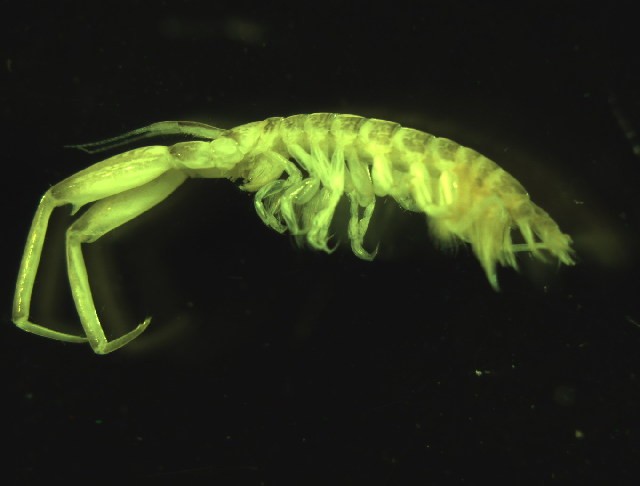 Corophium volutator is a marine and estuarine tube-dwelling amphipod. It is native to the Atlantic coasts of Europe, from Norway to Spain. It has been introduced to the Northeast Coast of North America where its range is limited to the Gulf of Maine, from Boston to the Bay of Fundy. It is a sedentary species which occurs in intertidal mudflats, marsh pools, and ditches. Although this species was not discovered in the Gulf of Maine until the early 20th century, it has been studied as a keystone species on mudflats in the region, where it is a vital link across fish and bird food webs.

Corophium volutator is native to the Atlantic coasts of Europe, from southern Norway to Spain (Crawford 1937; Bousfield 1973; Lincoln 1979). Records from the Mediterranean and Black Sea probably refer to the closely related C. orientale, formerly regarded as a variety or subspecies of C. volutator (Bousfield and Hoover 1997). Corophium volutator is tolerant of brackish and 'nearly fresh' waters (Bousfield 1973). It ranges through the Baltic Sea into the 2-3 PSU isohaline of the Gulf of Bothnia (Dobrzycka and Szaniawska 1995). On the East Coast of the U.S., its range is limited to the Gulf of Maine, from Boston to the Bay of Fundy. Genetic analysis indicates that the population in the Gulf of Maine is introduced (Einfeldt and Addison 2015). The first published reports of C. volutator are by Huntsman and Sparks (1924, cited by Einfeldt and Addison 2015). Blake (1933) and Shoemaker (1934a) referred to specimens taken in the Bay of Fundy, and Maine. Although this species was not discovered in the Gulf of Maine until the early 20th century, it has been studied as a keystone species in Gulf of Maine mudflats, as an ecosystem engineer and a vital link in local food webs (Wilson and Parker 1997; Percy 1999; Hamilton et al. 2006).

Corophium volutator was not collected in extensive late-19th century surveys of the U.S. Fish Commission in the Gulf of Maine. The earliest published mentions of this amphipod in the Gulf of Maine are from a survey of the Mt. Desert Island region, based on collections from 1926-1932 (Blake 1933). Shoemaker (1934a) mentions a specimen collected near Pine Point, Scarborough, Maine (ME), and several collections by the Biological Board of Canada, in the mouths of rivers entering the Bay of Fundy. Blake (1933) described C. volutator as 'abundant on certain mud flats'. Bousfield (1973) gave its range as Casco Bay (ME) through the Bay of Fundy, but it has also been reported from islands in Boston Harbor (before 2001, Bell et al. 2005). By the 1980s, it was recognized as an ecologically important species as a food organism for invertebrates, fishes, and shorebirds, and as a deposit feeder in the Bay of Fundy (e.g., Comitto 1982; Murdoch 1986).

Earlier authors noted the disparity in the range of Corophium volutator on the east and west sides of the Atlantic (Crawford 1937; Shoemaker 1947; Bousfield 1973). Chapman (2000) listed C. volutator as a probable introduction on the East Coast of North America. Wilson (1997) cited an unpublished, preliminary study suggesting a long genetic divergence between the two populations. A recent genetic study found that the genotypes of North American populations were a subset of European genetic diversity (Einfeldt and Addison 2015). The genetic data best support the model of two separate introductions to the lower Gulf of Maine and the Bay of Fundy. Since C. volutator is abundant in intertidal mud, dry ballast appears to be the likeliest mechanism for transport, although this amphipod also swims frequently, so ballast water cannot be ruled out (Einfeldt and Addison 2015).

Corophium volutator has a slender, very depressed body, and a massive Antenna 2, especially in the male, which is longer than Antenna 1. The coxal plates are small and separated. The urosome segments are not fused. Both sexes have a short, triangular rostrum, with the tip about equal to that of the eye-lobes. In dorsal view, the inner margins of segment 1 are crenulated in the male, and the flagellum is long, with 10-12 segments. Segments 2 and 4 of Antenna 2 each have a stout distal spine, while segment 5 is of equal length to 4, but lacks a distal spine. On Gnathopod 1, segment 6 is shorter than segment 5, and its palm is transverse and evenly convex. For Gnathopod 2, segments 5 and 6 are both shorter than segment 2, and the dactyl is long, lacking teeth. Pereiopods 3 and 4 have their bases a little inflated, and the dactylus is shorter than the propodus and carpus combined. Periopods 5-7 have increasing densities of setae on the posterior margins of the bases and pereiopod 7 is strongly elongated. All three uropods are biramous, but the inner ramus of Uropod 3 is greatly reduced. The peduncle of Uropod 1 has 10-12 spines on the outer margin and 3-4 long spines on the inner margin. The peduncle of Uropod 2 has 3-5 dorsal spines. Adults are 5-6 mm long, excluding Antenna 2. The body is tan, mottled with dark brown in the interior of the body segments and larger appendage segments. This description is based on Bousfield 1973, Lincoln 1979, and Bousfield and Hoover 1997.

Corophium orientale
Corophium orientale Schellenberg 1928 is a closely related species found in the Mediterranean, Black, and Azov Seas (Bousfield and Hoover 1997). It was formerly regarded as a subspecies or variety of C. volutator (e.g., Crawford 1937). Mediterranean and Black Sea records probably all refer to this species. Corophium orientale has been collected on the Atlantic Coast of Spain, in the Guadalquivir Estuary, where it was considered a probable introduction (Cuesta et al. 1996).

Gammarid amphipods have separate sexes, brooded embryos, and direct development (Bousfield 1973). Juveniles are about 1 mm in length, and the sexes become distinguishable at about 5 mm. Females tend to be larger than males, reaching a maximum of 12 mm, versus 8.5 mm for males (Barbeau et al. 2010; Percy 1999). (NB: Lengths are from rostrum to telson and exclude the antenna). In the Bay of Fundy, the sex ratio is strongly skewed towards females, while in most other locations it is closer to 1:1. Males leave the burrow and crawl or swim in search of females. A male may visit many burrows before entering one and mating (Percy 1999). The eggs and young are brooded by the female. Broods range from 10 to 172 eggs, averaging about 38, and tend to increase with the females' size. Broods are larger in the Bay of Fundy than at other locations (Mills and Fish 1979; Percy 1999). Broods take about 14 days, one tidal cycle, to develop, and tend to be born on a rising tide (Mills and Fish 1979). Populations in the lower Bay of Fundy, Northern Scotland, and the Baltic have only one generation per year, while those in Maine, England, western Sweden, and the upper Bay of Fundy have two generations, possibly because of higher water temperatures (Wilson and Parker 1996; Percy 1999). Central Maine populations breed in May-June and again in August-September (Wilson and Parker 1996).

Corophium volutator, as an inhabitant of mudflats and marshes with wide tidal ranges, and much air exposure, is tolerant of very wide ranges of temperature and salinity. It can survive in intertidal mud at temperatures below 0°C, with most animals in the upper 15 mm of sediment, although mortality occurs steady throughout the winter, probably due to depletion of fat reserves (Drolet et al. 2013). This amphipod has been found in fresh or 'nearly fresh' water (Bousfield 1973; Buckley 2004). In experiments, 50% of animals survived 10 days in fresh water, while 65% survived at very high salinities of 50 PSU. In the Gulf of Bothnia, Baltic Sea, it occurs up to the 3-4 PSU isohaline (Dobrzycka, and Szaniawska 1995). Corophium volutator builds a U-shaped burrow, first inspecting the surface and then choosing sediments with the right mix of fine and coarse particles for an easily dug, but stable burrow. The burrows often penetrates anoxic sediment (Meadows 1966). While this amphipod is mostly a burrow-dweller, many individuals, especially males and juveniles, also actively swim (Drolet et al. 2013). While C. volutator is usually thought of as an intertidal animal, in the Baltic, where tidal range is minimal, this amphipod occurs in and around seagrass beds down to 5 m (Bostrom et al. 2006).

This amphipod feeds on detritus and benthic microalgae (mostly diatoms), on the sediment surface, but can also capture suspended particles and phytoplankton. In experiments, when offered water with dense phytoplankton, C. volutator grazed until the cell concentration dropped to a threshold level, and then switched to scraping the sediment surface (Riisgard and Schotge 2007). Because of its frequent high abundance in estuaries, it has a major role as a grazer, burrower, and food organism. Major predators include polychaetes, fishes, and shorebirds (Comitto 1982; Percy 1999; MacDonald et al. 2014).

Although the amphipod Corophium volutator appears to be a relatively new arrival in the Gulf of Maine, it appears to have become locally abundant on mudflats, and in the Bay of Fundy, plays the role of a keystone species and an ecological engineer. Populations in the Bay of Fundy mudflats graze a large portion of the available microalgae, and provide food for 2-3 million migrating birds, and for fishes on the mudflats. The benthic microalgae, mostly diatoms, secrete carbohydrates which stabilize the sediment surface, so that amphipod feeding results in the destabilization of the sediment. Shorebird and fish predation reduces the amphipod population, and results in restoration of benthic diatoms and re-stabilization of the sediment (Hawkins 1985; Percy 1999; Daborn et al. 2002; Hamilton 2006).

Economic impacts of C. volutator are difficult to estimate, but the huge numbers of migrating shorebirds supported by this amphipod are valued aesthetically by tourists, birders, and conservationists, not just in the Bay of Fundy, but along much of the East Coast (Percy 1999). In addition, the fishes feeding on Corophium in the mudflats (Atlantic Shiner and Tomcod) (Salinas 1980, cited by Hawkins 1985) are small, and are likely forage for larger, commercially important fishes.

Bubinas, Algis; Vaitonis, Gintautas (2003) The analysis of the structure, productivity, and distribution of zoobenthocenoses in the Lithuanian economic zone of the Baltic Sea and the importance of some benthos species to fish diet, Acta Zoologica Lituanica 13(2): 114-124

Comitto, J. A. (1982) Importance of predation by infaunal polychaetes in controlling the structure of a soft-bottom community in Maine, USA, Marine Biology 68: 77-81

Crawford, G. I. (1937) A review of the amphipod genus Corophium, with notes on the British species., Journal of the Marine Biological Association of the United Kingdom 21: 589-630

Drolet, David; Barbeau, Myriam A. (1999) Diel and semi-lunar cycles in the swimming activity of the intertidal, benthic amphipod Corophium volutator in the upper Bay of Fundy, Canada, Crustaceana 29(1): 51-56

Einfeldt, Anthony L.; Addison, Jason A. (2015) Anthropocene invasion of an ecosystem engineer: resolving the history of Corophium volutator (Amphipoda: Corophiidae) in the North Atlantic, Biological Journal of the Linnean Society 115: 288-304

Fish, J. D.; Mills, A. (1979) The reproductive biology of Corophium volutator and C. arenarium (Crustacea: Amphipoda), Journal of the Marine Biological Association of the United Kingdom 59: 335-358

Hawkins, C. W. (1985) Population carbon budgets and the importance of the amphipod Corophium volutator in the carbon transfer on a Cumberland Bay mudflat, upper Bay of Fundy, Canada, Netherlands Journal of Sea Research 19(2): 165-176

Shoemaker, Clarence R. (1934a) The amphipod genus Corophium on the east coast of America, Proceedings of the Biological Society of Washington 47: 23-32

Shoemaker, Clarence R. (1947) Further notes on the amphipod genus Corophium, from the east coast of North America, Journal of the Washington Academy of Sciences 37(2): 47-63