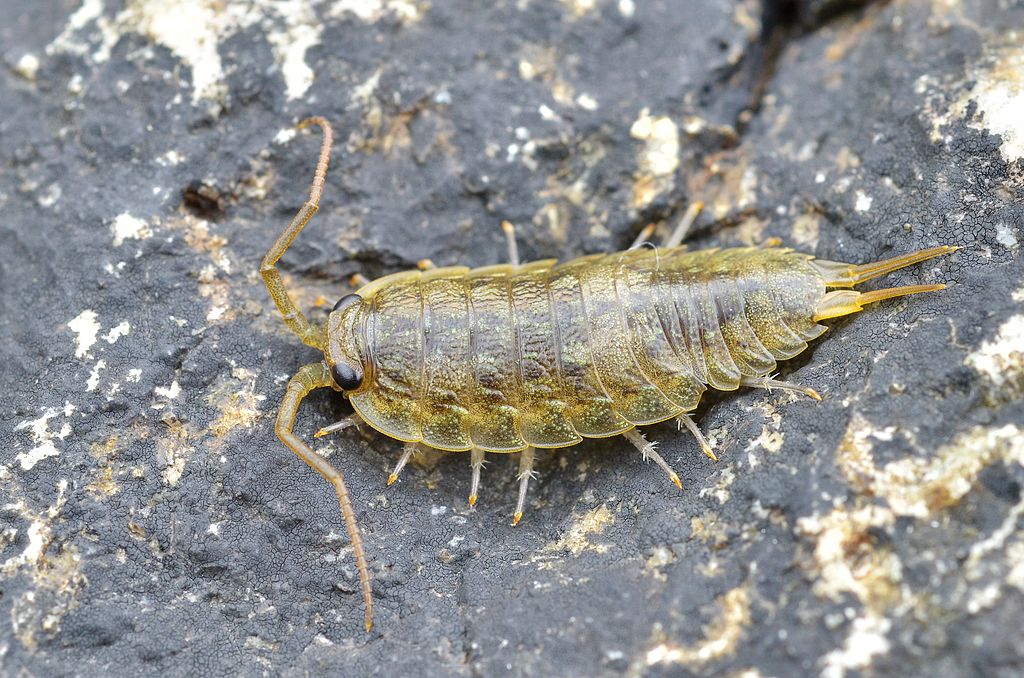 Ligia oceanica is a fast-running semi-terrestrial isopod commonly known as the Sea Slater. It is native to the Northeast Atlantic from Norway to Morocco and the western Baltic. It is introduced in the Northwest Atlantic from Maine to Massachusetts, and the Azores and Canary Islands. It is found on rocky shorelines, wharf pilings, and harbor areas where it inhabits the borders of the land and sea. It is a herbivore and scavenger in the intertidal zone in Europe, but appears to be rare in North America and has no reported ecological or economic impacts.

Ligia oceanica is native from Northeast Atlantic coasts from southern Norway to Morocco, and to the western Baltic, as far east as Rostock, Germany, and the Danish island of Bornholm (Van Name 1936; Ramirez and Riera 2013; Raupach et al. 2014; Rudolph 2014). Ligia oceanica has been introduced to the Azores and the Canary Islands (Morton et al. 1998; Cardigos et al. 2006; Ramirez and Riera 2013). It was collected in Newport, Rhode Island and Woods Hole, Massachusetts on wharves and pilings in 1880 and 1920-21, respectively ( Richardson 1905; Allee 1923; US National Museum of Natural History 2016). Established populations of L. oceanica were first discovered along the shores of the Gulf of Maine in 1933, and occur from Duxbury, Massachusetts to Cape Neddick, Maine (Swan 1956; Dexter 1959; USNM 95727, US National Museum of Natural History 2016). The most likely vectors for this air-breathing littoral isopod are dry ballast of sailing ships, and cargo carried on the docks or in the holds of ships.

Ligia oceanica was collected a number of times around 1880, around docks in Newport, Rhode Island (US National Museum of Natural History 2016). It was also found on rocks and pilings at one location in Woods Hole, Massachusetts in 1920-21 (Allee 1923). However, established populations are not known form these locations. In 1933, a cast skin was found on rocks in East Gloucester, Massachusetts. Subsequently, Swan (1956) and Dexter (1959) collected this animal, and found reports from Duxbury, Massachusetts, north of Cape Cod, to Cape Neddick in southern Maine, mostly around seawalls and docks. These isopods are fast-moving and secretive, but large populations were found under boards and in crevices where debris had accumulated (Swan 1956; Dexter 1959). The most recent collection we found reported is from Star Island, New Hampshire, in 1992 (USNM 251910, US National Museum of Natural History 2016).

Morton and Britton (2000) and Cardigos et al. (2006) considered Ligia oceanica and L. italica to be introduced to the Azores from Europe, although the date of introduction was not known. This isopod was discovered on the seawall of a marina in Las Palmas, on Isla Gran Canary, but was not found in other locations (Ramirez and Riera 2013). One specimen was collected from Western Cape, South Africa in 1889 (USNHNM 15064, US National Museum of Natural History 2008), but is not known to be established there (Mead et al. 2011b).

Ligia oceanica has an elongate-oval shape, about twice as long as wide. Its body is widest in the middle and rounded posteriorly. The head is ~1.5 times as wide as long, with a rounded anterior margin. The eyes are medium-sized and compound. Antennae 1 is inconspicuous and composed of 3 segments. Antennae 2 reaches back to the 4th thoracic segment, and each have a flagellum of 12-14 segments. The posterior-lateral corners of the 7 thoracic and 3 abdominal segments are somewhat drawn backwards posteriorly. The tergal plates of the thorax have a cross separating them from the coxal plates. The telson is a shallow, inverted arch, with a lateral point on each posterior corner. The biramous uropods are about a quarter of the body length, divided roughly evenly between the basal segments and the two pairs of rami. The pereiopods (walking legs) are involved in locomotion, but in the male, the merus, carpus, and propodus are expanded into a flat plate-like expansion, with its free border fringed with short setae. The second pleopod of the male has a stylus-like process, with a pointed tip [involved in copulation (Richardson 1905; Van Name 1936)]. Ligia oceanica and can reach 30-35 mm in size (Ramirez and Riera 2013). The color is slate gray, olive gray, or greenish gray and the carapace is covered with granules (Richardson 1905; Van Name 1936; MarLin 2016).

A genetic study found two main lineages of L. oceanica in Europe: a northern lineage, from Norway to Brittany; and a southern lineage, from Brittany to Spain (Raupach et al. 2014). Populations in North America were not well studied.

Ligia exotica
Ligia exotica is a littoral semi-terrestrial isopod, probably native to the Indo-Pacific region. It is established on the Atlantic coasts of North and South America from New Jersey to Argentina (Van Name 1936).

Ligia oceanica has separate sexes, brooded young, and direct development. Fertilization is internal. For females from England, fecundity increased with body size, the number of embryos increasing with body size, from ranging from 50 to 120 eggs. Adults here are semlparous, but with early-summer and late-summer breeding cohorts (Willows 1987a; Willows 1987b).

Ligia oceanica is adapted for survival on the borders of the land and sea. It generally avoids submersion, but can survive 'indefinitely' in seawater. Animals survived well at 32 and 16 PSU, but only a few survived at 8 PSU (Todd 1963). Animals survived at air temperatures up to 35°C, and tolerate winter temperatures close to freezing (Newell et al. 1967). This isopod requires shelter, such as rocks, riprap, and seawalls for moisture and temperature control (Dexter 1966; Willows 1987a; MarLin 2016). Their food consists of diatoms, scraped from rocks, and plant detritus (Willows 1987a), but Newell et al. (1976) fed them on pears, so thy probably can eat a wider range of plant food. Likely predators include shorebirds and littoral mammals, such as rats, raccoons, etc.

Ligia oceanica is an important littoral organism as an herbivore and scavenger in the intertidal zone in Europe, but it appears to be rare in North America and has no reported impacts.

Holthuis, L. B. (1949b) The Isopoda and Tanaidacea of the Netherlands, including the description of a new species of Limnoria, Zoologische Mededelingen 30(12): 163-190

Willows, R. I. (1987a) Population dynamics and life history of two contrasting populations of Ligia oceanica (Crustacea: Oniscidea) in the rocky supralittoral, Journal of Animal Ecology 56: 315-330

Willows, R. I. (1987b) Intrapopulation variation in the reproductive characteristics of two populations of Ligia oceanica (Crustacea: Oniscidea), Journal of Animal Ecology 56: 331-340