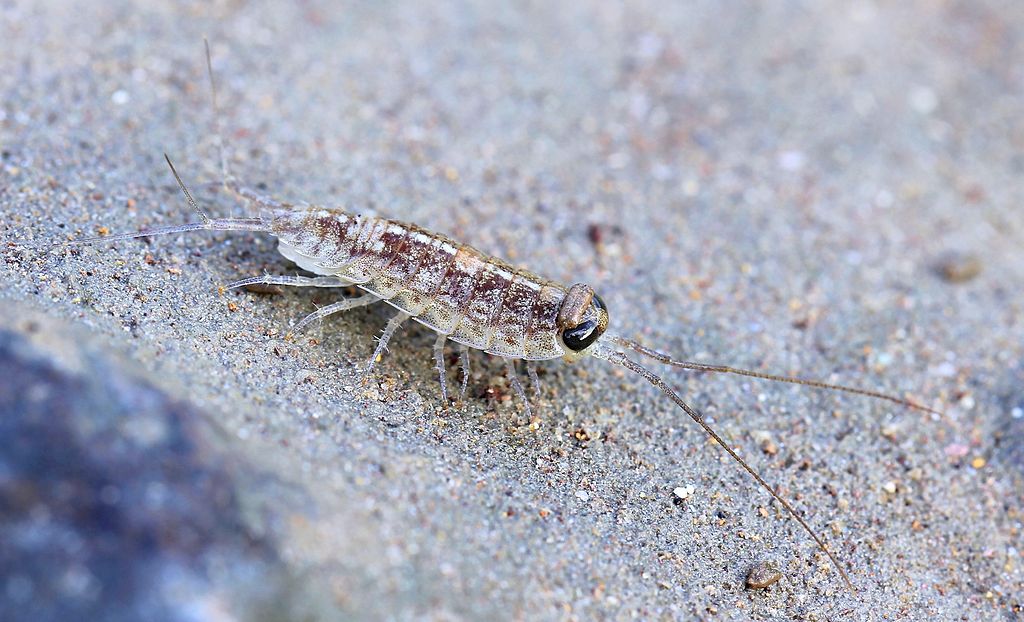 Ligia exotica is commonly known as the Sea Roach. It was first described from shipping docks in Marseilles, France, but is native to the Indo-Pacific and Asia. Introduced populations are found on the East Coast of North America (New Jersey to the Caribbean), the Azores, West Africa, Argentina, and a number of Pacific Islands, including Hawaii. It is a fast-running, semi-terrestrial, isopod found on rocky shorelines, wharf pilings, and harbor areas. Likely vectors for its global distribution include 'dry' ballast, and the moist cargo-holds and damp niches on the decks of ships. Although it is widely introduced, no economic or ecological impacts have been reported.

Ligia exotica was first described from docks at Marseilles, France by Roux in 1828. As its name indicates, L. exotica is not native in the Mediterranean and is not established there (Roman 1977). This semi-terrestrial, supralittoral species has been widely distributed by shipping and full breadth of its original range is uncertain. It is native to the Indo-Pacific from Japan and China south to Madagascar and South Africa (Roman 1977; Yin et al. 2013). It is also found (and probably was introduced) on the West African coast and in the Azores (Roman 1977; United States National Museum of Natural History collections 2016). Ligia exotica is abundant in warm-temperate and mild tropical regions, but is 'apparently rare in the true tropics' (Schultz 1974). In the Western Atlantic, it is found from New Jersey to Argentina, but is apparently absent from equatorial Brazil (Richardson 1905; Van Name 1936; Schultz 1977). In the Pacific, it has been introduced to Hawaii, American Samoa, and French Polynesia (Coles et al. 2003; United States Museum of Natural History 2016). Genetic studies indicate that populations from Georgia and Hawaii are derived from populations in central China, on the southern coast of the Yellow Sea (Clone B, Yin et al. 2013).

In the Western Atlantic, Ligia exotica was apparently first reported from Fort Macon, North Carolina in 1878 (Harger 1880, cited by Van Name 1936), but a number of museum specimens were collected during the same time period, including in Cedar Key, Florida (FL) in 1883; Key West, FL in 1883; Tampa Bay, FL in 1884; and Charleston, South Carolina in 1891 (US National Museum of Natural History 2016). By the 1950s, it had been collected from the Florida Panhandle (St. Josephs Bay) to Padre Island, Texas (Whitten et al. 1950; US National Museum of Natural History 2016). Its wide distribution at that time suggests that it was introduced much earlier. However, it seems likely that collectors active in Florida and the Carolinas in the early 1800s (e.g. Say 1817) would have noticed this animal, if it was abundant.

Museum and published records suggest that the extension of its range north of Cape Hatteras may have occurred in the 20th century. Gould (1841) reported Ligia spp. (either exotica or oceanica) from docks in Massachusetts, probably Boston, 'but it is not likely that the present species could survive the winter at that latitude' (Van Name 1936). Ligia exotica was not included by Uhler (1878) in a list of marine invertebrates and insects from Fort Wool, Virginia (VA). It was reported from Cape Charles in 1929 (Richards 1931). At present, Ligia exotica in Chesapeake Bay extends into mesohaline waters on the north shore of the lower Potomac (e.g. Piney Point Maryland, Virnstein and Boesch 1975, cited by Lippson et al. 1979), and Crisfield (United States National Museum of Natural History collections, Godwin 1997), north to Shady Side, Sandy Point State Park, and North Point State Park (north of Baltimore) (Fofonoff, unpublished data). Specimens were collected in Atlantic coastal bays and on rock jetties (United States National Museum of Natural History 2016). The first record of L. exotica is from Hog Island, VA (1924). It was also found in Oyster, VA in Hog Island Bay in 1934 (United States National Museum of Natural History collections), and at Cape Charles, VA in 1929, on rock jetties north of Cape Charles (Richards 1931). It is abundant on Atlantic coastal jetties and Atlantic Bay shores. Ligia exotica is not mentioned in Fowler’s (1911) account of Crustacea of New Jersey, but there is a museum collection from New Jersey dated 1930, with no location given (United States National Museum of Natural History). It is now abundant on the southern shore of Delaware Bay and in the vicinity of Atlantic City (Godwin 1997, personal communication).

Early records of Ligia exotica (e.g. Van Name 1936) referred to the native L. hawaiiensis, but L. exotica was collected in 1996 in Hilo, on the island of Hawaii (Carlton and Eldredge 2009).

Before, and shortly after, 1900, Ligia exotica was collected at a number of ports in the Caribbean and into South America including Havana, Cuba (in 1919); Antigua (in 1895); St. Thomas, Virgin Islands (in 1915); Cayenne, French Guiana (in 1900); Salvador (Bahia), Brazil (in 1887); and Montevideo (in 1888) (United States National Museum of Natural History collections). Other, possibly later, locations include the Bahamas; Isla Margarita, Venezuela; and Santo Domingo, Dominican Republic (Kensley and Schotte 1989; Gutiérrez 2010). Ligia exotica occurs at least as far south as Quequen, Argentina (34.5°S, Orensanz et al. 2002). As noted above, records appear to be rarer in the equatorial tropics, at least in the Western Hemisphere (Schultz 1974).

Ligia exotica was described from a ship in the harbor of Marseille, France in 1828, but did not become established (Roman 1977). A specimen was found in a house in Amsterdam, in 1936, but there were no further records (Holthuis 1949b). In 1905, a specimen was collected on Sao Miguel Island, in the Azores (United States Museum of Natural History 2008). However, L. exotica is not established in the Azores. Two European species, L. oceanica and L. italica are introduced and established in the Azores (Cardigos et al. 2006). Established populations of L. exotica do occur on the Atlantic coast of west-central Africa. These are probable introductions, although genetic studies would be useful to verify species identity. Specimens were collected in Liberia in 1930, and later found in the Niger Delta, the Lagoon of Lagos, and the Congo Delta (United States Museum of Natural History 2016).

Ligia exotica has been collected on remote Polynesian islands, including Rangiroa Island, in the Tuamotu Archipelago (in 1899); Raiatea, in the Society Islands (in 1927); and Pago Pago, American Samoa (in 2002, Coles et al. 2003; United States Museum of Natural History 2016).

Ligia exotica has a body with an elongate-oval shape, about twice as long as wide, and widest in the anterior part of the body and tapered posteriorly. The head is twice as wide as long, with a rounded anterior margin. The eyes are large and compound. Antennae 1 is inconspicuous and composed of three segments. Antennae 2 are about equal to its body length and each have a flagellum of 55 segments. The posterior-lateral corners of the seven thoracic and three abdominal segments are increasingly drawn backwards posteriorly. The telson is shield-shaped, ending in an obtuse lateral point, with three lateral points on each side. The biramous uropods are more than half the body length, divided roughly evenly between the basal segments and the two pairs of rami. The pereiopods (walking legs) are involved in locomotion, but in the male, the propodus (penultimate segment) of the first pair of legs has a small terminal process, absent in the female. The second pleopod of the male has a stylus-like process, with the tip curled, like the head of a violin, involved in copulation (Richardson 1905; Van Name 1936). Ligia exotica becomes reproductive at 16 mm and can reach 38.5 mm. The color may be mottled brown, gray or black, covered with granules, which may be lighter or darker than the background color (Richardson 195; Van Name 1936; Schultz 1977).

Ligia exotica has separate sexes with direct development of brooded young. Females begin reproducing at 16 mm (minimum adult size; Schultz 1977; Kensley and Schotte 1989). Fertilization is internal. Females in Florida released brooded young 28-30 days after copulation (Farr 1978). For females in the subtropical Patos Lagoon, Brazil, ranging in size from 20.7 mm to 34.3 mm, the number of embryos varied from 33 to 142, increasing with body size. Abundances were greatest in the Austral spring-autumn. Numbers of ovigerous females and juveniles were greatest in spring (October) (Lopes et al. 2008). In Maryland, L. exotica is rarely seen from December through April, but large numbers of juveniles appear in May and June (Fofonoff, personal observations). Ligia exotica in southern Brazil had a mean longevity of 1.1-1.3 years (Lopes-Leitzke et al. 2009).

Ligia exotica is adapted for survival on the borders of the land and sea. It generally avoids submersion, although it can tolerate at least four days in oxygenated seawater, but requires moist habitats on land (Tsai and Chen 1997). This isopod requires shelter, such as rocks, riprap, or logs, for moisture and temperature control (Farr 1978). In the temperate parts of its range, L. exotica endures a wide range of temperatures, up to 38°C, but is apparently dormant in winter, and seems to require temperatures of 15-20°C for activity (Tsai and Dai 2001; Lopes et al. 2008; Fofonoff, personal observations). Ligia exotica survives immersion in water of salinities as low as 7 PSU and occurs in mesohaline salinities of Chesapeake Bay as far north as Baltimore (Lippson and Lippson 1997; Fofonoff, personal observations). In Taiwan, L. exotica has colonized the shores of a freshwater stream, several kilometers inland, but has not developed tolerance for freshwater immersion (Tsai et al. 1996). Although L. exotica develops large populations, its diet has rarely been studied. In Brazil, this isopod feeds on algae, especially Polysiphonia spp., vegetable detritus, sand, and rarely, other crustaceans (Lopes-Leitzke et al. 2011). Likely predators include shorebirds, and littoral mammals, such as rats and raccoons.

Although Ligia exotica is widely introduced, no economic or ecological impacts have been reported. 'Sea roaches' may be aesthetically unpleasant, but their impact on coastal resources is presumably insignificant. Its abundance in the upper intertidal and spray-zone on the southern Atlantic coasts of North America suggests that it may play an important role, but ecological impacts seem to have been little studied. This isopod grazes on diatoms and encrusting algae growing on hard surfaces (Carefoot and Taylor 1996; Schultz 1977). The quantitative importance of its grazing is unknown. Ligia exotica is a potential prey item for many species, especially shorebirds. However, we have found no information on its role in marine or terrestrial food webs.

Green, Alison J. A. (1962) Record of the occurrence in Australia of Ligia exotica Roux (Crustacea, Isopoda, Oniscoidea), Papers and Proceedings of the Royal Society of Tasmania 96: 83-85

Holthuis, L. B. (1949b) The Isopoda and Tanaidacea of the Netherlands, including the description of a new species of Limnoria, Zoologische Mededelingen 30(12): 163-190

Schultz, George A. (1974) Terrestrial isopod crustaceans (Oniscoidea) mainly from the West Indies and adjacent regions. I. Tylos and Ligia., Studies on the Fauna of Curaçao and Other Caribbean Islands 45(149): 162-173

Schultz, George A. (1978) Four marine isopod crustaceans from St. Catherines Island with a list of other species from Georgia, Georgia Journal of Science 36: 1-17