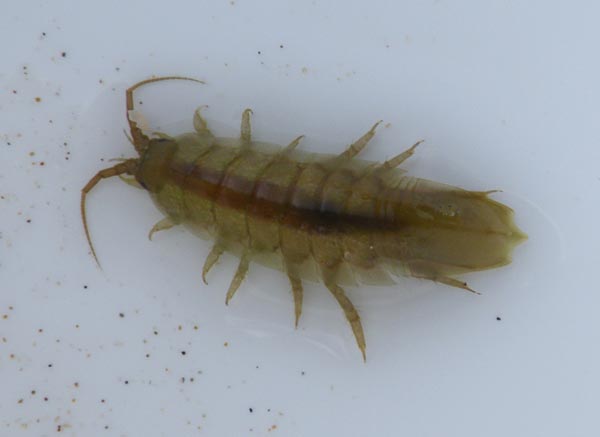 Caecijaera horvathi is a small, blind, marine isopod which lives as a commensal in the burrows of the wood-boring isopod Limnoria spp. It was first described from Los Angeles-Long Beach harbor, California in 1951 and is also known from Hawaii and Cuba. Its global distribution and native range are unknown. We consider this species introduced in California because its host, Limnoria tripunctata, is non-native to this region. Further work on the distribution and origin of C. horvathi and L. tripunctata is needed.

Caecijaera horvathi has a roughly oblong body, which is usually twice as wide as it is long, with a rounded head and telson. Coxal plates are not visible in dorsal view. Antenna 1 has an inflated basal segment and 5 subsequent segments. The first segment of Antenna 2 is extended laterally, and the third segment bears an oval scale. The flagellum has 14 segments and is about equal to half the width of the head. In males, Pleopods 1 and 2 are modified for copulation. Pleopods 1 are fused to form a narrow appendage (the sympod), widening near the tip and ending in a knob (Menzies 1951, California) or in thick curved outer spines, and finer inner spines (Cooke 1977, Hawaii; Kensley et al. 1997, Cuba). Pleopods 2 are not fused, but the inner ramus is modified into a needle-like stylus. The pleotelson is shield-shaped, and the short biramous uropods protrude from notches. Specimens from Hawaii and Cuba differed from those from California, in having the basal segment of Antenna 1 with a more extended lobe, reaching the distal joint of the second segment, and in the differences in the form of Pleopods 1, as noted above (Cooke 1977; Kensley et al. 1997). Wilson and Wagele (1994) and Kensley et al. (1997) suggest that the Hawaiian and Cuban forms could represent a separate species. Adults are about 1.6-1.8 mm long. Description based on: Menzies 1951, Schultz 1969, Cooke 1977, Kensley et al. 1997, and Brusca et al. 2007.

The native region of Caecijaera horvathi is unknown. It occurs solely in the burrows of the wood-boring gribbles, Limnoria spp. (possibly only L. tripunctata), also of unknown origin. Limnoria tripunctata is now widely distributed throughout the world and is considered introduced on the West Coast, where it was first reported in 1871 (Menzies 1951; Carlton 1979). Caecijaera horvathi was described from Los Angeles-Long Beach harbor, California (Menzies 1951), and has been subsequently found in Hawaii (Cooke 1977) and Cuba (Kensley et al. 1997).

The only collections of Caecijaera horvathi from the West Coast, of which we are aware, are the collections made by Menzies for the species' description on Dec. 6 1950, when a total of 29 specimens were collected from wood infested with Limnoria tripunctata (Menzies 1951; Carlton 1979). Given the small size and obscure habitat of this isopod, and the absence of recent studies of the ecology of Limnoria in California, we presume that it is still established. However, more collections and further research are needed.

Invasion History on the Hawaii:

Caecijaera horvathi was collected in test blocks of wood, infested with Limnoria tripunctata, at Makai Range Pier, near Honolulu, on March 13, 1975, and continued to be collected through 1975. It was not collected at other test sites in Hawaii (Cooke 1977). Carlton and Eldredge (2009) cite no further reports of this isopod in the Hawaiian Islands, but treat it as established.

Caecijaera horvathi was collected on April 10, 1994, in Limnoria sp. burrows, in the hulls of decaying barges at Cayo Mendoza, on the northwestern coast of Cuba. Five male specimens were preserved (Kensley et al. 1997; USNM 1083189, US National Museum of Natural History 2007). We have no further records of this isopod from the western Atlantic.

Carlton, James T. (1979) History, biogeography, and ecology of the introduced marine and estuarine invertebrates of the Pacific Coast of North America, , Davis. Pp. 1-904