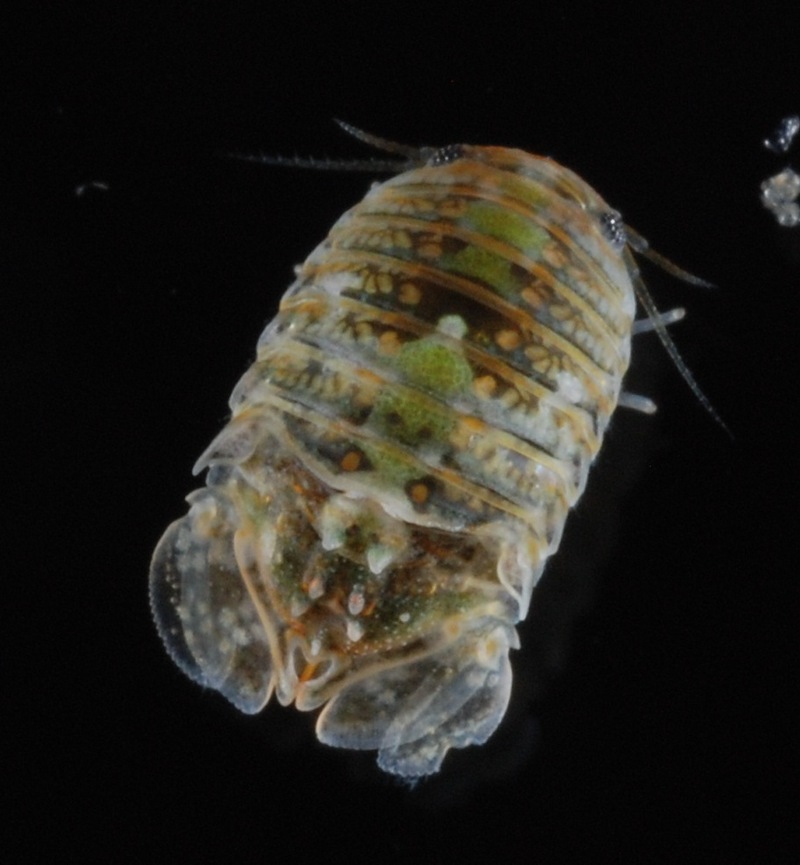 Paradella dianae is a marine and estuarine isopod. It was described from Bahia de San Quintin, on the Pacific Coast of Mexico, and its native range extends from San Diego Bay, California to Mazatlan, Mexico, including the Gulf of California. It has been widely introduced to warm-temperate and tropical harbors and coastal waters around the world. Populations are now found on every continent, except Antarctica, and on a number of oceanic islands. It is known from intertidal rocky shores, pilings, jetties, dock floats, seaweeds, mangrove roots, tubeworm reefs, and soft sediments. It may compete with other intertidal isopods, but negative ecological interactions have not been quantified.

Paradella dianae was described from Bahia de San Quintin, on the Pacific Coast of Mexico, and is known from San Diego Bay, California to Mazatlan, Mexico, including the Gulf of California. An occurrence in Pisco, Peru could be part of the natural range, or an introduction (Menzies 1962; García-Guerrero and Hendrickx 2005; U.S. National Museum of Natural History 2016). Paradella dianae has been widely introduced in warm-temperate and tropical harbors and coastal waters around the world. It is found on the coasts of every continent except Antarctica, and on oceanic islands (e.g. Hawaii, the Marshall Islands, and Bermuda). Early introductions include Fernandina Beach and Key West, Florida in 1965 and 1968, respectively (US National Museum of Natural History 2016); Puerto Rico in 1966 (Glynn 1970); Eniwetok Atoll in 1967 (Glynn 1970); Queensland, Australia in 1971 (Harrison and Holdich 1982); Brazil in 1978 (Pires 1980); and Italy in 1985 (Forniz and Maggiore 1985).

In 2002-2003, Paradella dianae was found in Port Allen Harbor, Kauai, and Kahului Harbor, Maui (Coles et al. 2004; Carlton and Eldredge 2009). It is probably more widespread in the islands than currently reported.

In the Indo-Pacific region, it was first seen on Eniwetok Atoll, in the Marshall Islands in 1967 (Glynn 1979). This was a site of naval operations and nuclear testing, so transport by military vessels is likely. Other appearances were mostly near shipping ports. The first record in Australia is from Brisbane, Queensland in 1971 (Harrison and Holdich 1982). It was later found in Townsville, Queensland in 1976 (Harrison and Holdich 1982); in the Swan River estuary, Western Australia in 1978 (Harrison and Holdich 1982); and in 1995 in Bunbury Harbor, also in Western Australia (Hass and Knott 1998). Elsewhere in the Indo-West Pacific, it was found in Buleji, near Karachi, Pakistan, on the Arabian Sea in 1984 (Javed and Ahmed, 1987); Hong Kong in 1986 (Bruce 1992); and Singapore in 2003 (Bruce and Wong 2015).

Paradella dianae has a rectangular-ovoid body shape, with a crescent-shaped cephalon and prominent eyes. Especially in the, male, the posterior border of the cephalon is a shelf-like ridge. The flagellum of Antenna 1 has 12 segments; while the flagellum of antenna 2 has 13 segments. The posterior edge of peraeonite 7 is bilobed, with a small central indentation and two ovoid lateral lobes. Pleonite 1 has two rounded median tubercles. In the male, the pleotelson is roughly triangular, with a heart-shaped opening (foramen) at the apex. Anterior to the cleft are 4 elongated tubercles, arranged in a rectangle- the male also has a small tubercle anterior to the foramen. Pleopods 2 of the male bear a long extension, twice the length of the endopod. The rami of the uropods are broad, oval, and paddle-like, and broader in males than in females. The endopods of the uropods extend beyond the tip of the pleotelson. In the female, the apex of the pleotelson has a simple notch, with no anterior tubercle. The endopod of the uropod ends level with the apex of the pleotelson. Males reach 3.5-5.6 mm in size, while females are usually smaller (2.1-5.6 mm). Live animals are mottled brown and yellowish white, with a broad yellowish white patch, and two black or orange dots in the center of Pleonite 1. This description is based on: Menzies 1962; Glynn 1970; Pires 1980; Harrison and Holdich 1983; Forniz and Maggiore 1985; Kensley and Schotte 1989; Atta 1991; Garcia-Guerero and Hendrickx 2005; and Knott et al. 2011.

As with most isopods, Paradella dianae has separate sexes and fertilization is internal. However, an unusual feature of this isopod is that this species is a protogynous hermaphrodite. The young mature as females, brood and bear young, and then transform into males. Females are generally smaller (2.1-4.0mm) than males (3.5-5.6 mm) (Menzies 1962; Glynn 1970; Pires 1980; Harrison and Holdich 1983; Forniz and Maggiore 1985; Kensley and Schotte 1989; Kensley and Schotte 1999; Atta 1991; Knott et al. 2011). Ovigerous females have penises similar to those of subadult males. The young are brooded by the female and development is direct (Kensley and Schotte 1999). The number of embryos increases with body size, from 14 to 24, over a size range of 2.4 to 5.6 mm (Garcia-Guerrero and Hendrickx 2005).

Paradella dianae is widespread in warm-temperate to tropical climates (13-30°C) and tidal fresh to euhaline salinities (0-39 PSU, Nelson and Demetriades 1992; Rodriguez et al. 1992; Kensley and Schotte 1999). It is known from a wide range of intertidal and shallow-water habitats, including invertebrate fouling communities, seaweeds, mangrove roots, wharf pilings, rock crevices, and tubeworm colonies, but also from soft sediments (Clark and Robertson 1982; Forniz and Maggiore 1985; Nelson and Demeriades 1994; Hass and Knott 1998; Kensley and Schotte 1999; Garcia-Guerrero and Hendrickx 2005). Paradella dianae feeds by scraping algae and biofilms from surfaces (Harrison and Holdich 1982; Mungia and Alenius 2016).

On jetties in the Gulf of Mexico, Paradella dianae 'seems to replace Sphaeroma quadridentatum, the most abundant isopod on the northern jetties' (Clark and Robertson 1982). However, interactions between the two species, have not been quantified, to our knowledge.

Javed, Waquar; Ahmed, Roshan (1987) On the occurrence of Paradella dianae, a genus and species of Sphaeromatidae (Isopoda, Flabellifera) in the Arabian Sea., Crustaceana 53(2): 215-217

Menzies, Robert J.; Glynn, Peter W. (1968) The common marine custaceans of Puerto Rico, Studies of the Fauna of Curacao and other Caribbean Islands 27: 1-33