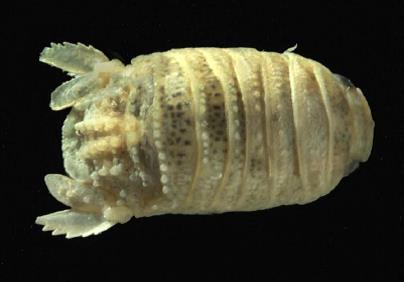 Sphaeroma walkeri is a marine isopod that resembles a terrestrial pillbug. It is not a substrate-borer, but is a crevice-dweller, living in and under rocks, wood, and in fouling communities on jetties, pilings, floats, buoys, and vessel hulls. It is native to the Indian Ocean and is one of the world’s most widespread isopod invaders. Introduced populations are spread throughout both sides of the Atlantic, the Mediterranean, Southern China, Australia, Southern California, and Hawaii. Despite its broad distribution, no ecological or economic impacts have been reported for this species.

Sphaeroma walkeri was described from the Gulf of Mannar, Sri Lanka, and subsequently (1950s-1960s) from the Bay of Bengal and Arabian Sea coasts of India (Carlton and Iverson 1981). Range extensions westward into Pakistan (California Academy of Sciences 2015), the Strait of Hormuz (Khalaji-Pirbalouty 2014), the Persian Gulf (US National Museum of Natural History 2007), the Gulf of Suez (Omer-Cooper 1927, cited by Carlton and Iverson 1981), and eastward to Malaysia and the Strait of Malacca (Rai Singh and Sasekumar 1996), probably represent a mixture of newly discovered natural populations and ship transport.

Sphaeroma walkeri was first collected on the West Coast in 1973 in San Diego Bay, California (CA) (Carlton and Iverson 1981). In 1973-1976, it was found throughout much of the bay in fouling communities on pilings, floats and small boats, crevices of intertidal rocks, empty barnacle shells, and burrows made by gribbles (Limnoria spp). At some sites, it exceeded native sphaeratomid isopods (Paracerceis sculpta, Paradella dianae) in abundance. It was not found in adjacent Mission Bay. Sphaeroma walkeri has been reported from San Francisco Bay, as appearing in the 1990s (Carlton 2000; Fairey et al. 2002), but no information is available on its distribution or establishment. It has not been reported in recent surveys in southern California or San Francisco Bay (Cohen et al. 2002; Cohen et al. 2005; Cohen and Chapman 2005; Foss 2009). We consider this species to be established in Southern California, but treat its establishment status in San Francisco Bay as 'unknown'.

Sphaeroma walkeri was first collected on the East and Gulf coasts in 1943, during a study of fouling on buoys in US coastal waters (Miller 1968: Carlton and Iverson 1981). During this survey, S. walkeri was collected on both coasts of Florida, at Ponce de Leon Inlet, near Daytona Beach on the Atlantic Coast (USNM 233250, US National Museum of Natural History 2007), and the Egmont Channel, Tampa Bay and New Pass, Sarasota Bay on the Gulf Coast (Miller 1968). Subsequently, this isopod was collected on the Atlantic Coast of Florida from Fernandina Beach, near the Georgia border, to Virginia Key, Biscayne Bay including many sites in the Indian River Lagoon (Carlton and Iverson 1981; Nelson and Demetriades 1992; Kensley et al. 1995; US National Museum of Natural History 2015). On the Gulf Coast of Florida, we have no definite records beyond the Tampa and Sarasota Bay records from 1943 (Miller 1968), but assume that it is established. In 1978, S. walkeri was collected on jetties and rocks at South Padre Island, Texas (Clark and Robertson 1982). The extent of this isopod's range in the Gulf of Mexico is uncertain.

Sphaeroma walkeri was collected in Hilo harbor, during the broad scale 1943 survey of fouling on buoys throughout the United States (Miller 1968). In 1961, it was found in Hanamaula Bay, Kauai (Carlton and Iverson 1981). It has also been collected in Pearl Harbor and Kaneohe Bay, Oahu (in 1976-1980, Carlton and Eldredge 2009).

The spread and/or discovery of Sphaeroma walkeri into the Mediterranean shows a similarly spotty pattern, with an early colonization of the Suez Canal, but with records scattered in space and time further west. Early records from Suez include: Lake Timsah and Port Said, Egypt (in 1924, Fox 1927, cited by Carlton and Iverson 1981). However, records outside Egypt were reported much later: Haifa, Israel in 1972 (Glynn 1972, cited by Galil 2008); Alicante, Spain in 1981 (Jacobs 1987); Turunc, Turkey, Aegean Sea in 1995 (Kirkim et al. 2006); Tunisia, Lagoon of Tunis, in 2003 (Ben Amor et al. 2010), with large gaps in its known Mediterranean range. It was collected in the Black Sea, in Romania in 2004 (Skolka and Preda 2010), but was called 'casual' and not established, there. In the Eastern Atlantic, S. walkeri was found at Nouadhibou, Mauritania, in 1978, and Tangier, Morocco, in 1982 (Jacobs 1987).

Sphaeroma walkeri has a compact, convex, elliptical body, about twice as long as wide. The anterior edge of the head has a small, but visible rostral process, flanked by two blunt projections and bordered by two large eyes. Peraeonites 2-7 have the coxal sutures clearly visible in lateral view, and each has a row of tubercles, which increase in size and density posteriorly. The pleon segments also bear rows of tubercles. The peraeaonites are roughly equal in width, except for Peraeonite 1, which is somewhat broader than the others. The pleotelson has 4 longitudinal rows of large tubercles and irregular lateral rows. There are also 3 large tubercles on the endopodites of the uropods.

Antenna 1 has a flagellum of 13-16 segments and extends to the posterior edge of Peraeonite 1. Antenna 2's flagellum has 14-20 segments, and passes the posterior edge of Peraeonite 2. Peraeonites 2-7 each bear a broad transverse ridge. Pereiopods 1-3 bear dense plumose setae on the upper (anterior) surface of segments 3-4, a possible adaptation for filter-feeding. The pleon has several tubercles. The outer edges of the exopods of the uropods each bear 5-7 prominent teeth. The apical edge of the telson is crenated (scalloped). Adult males are 6-16 mm long, while females are smaller. We have not found descriptions of coloration, but photographs show this isopod being tan, with dark-brown dots. Description based on: Harrison and Holdich 1984, Jacobs 1987, Brusca et al. 2007, Galil 2008, Ben Amor et al. 2010, Khalaji-Pirbalouty and Wägele 2010.

Sphaeroma quoianum
Sphaeroma quoianum is native to the coasts of Australia and New Zealand, and introduced to the West Coast of North America from San Diego to Yaquina Bay, Oregon. This isopod is common in estuarine habitats, where it bores in rotten wood, salt-marsh peat, sandstone, and Styrofoam (Carlton 1979; Davidson et al. 2008).

Sphaeroma terebrans
Sphaeroma terebrans is probably native to the Indian Ocean, from Mozambique to India, Japan and Australia, and a very early introduction to the Atlantic, from South Africa to Ghana, and from Brazil to South Carolina. This isopod is a frequent woodborer in mangroves, driftwood, and ships' hulls, and is also known to burrow in marsh peat. It is euryhaline, occurring from freshwater to ~38 PSU (Harrison and Holdich 1984; Kensley 1978; Kensley and Schotte 1989; Carlton and Ruckelshaus 1997).

Sphaeroma walkeri has separate sexes and internal fertilization. Its young are brooded by the female, and development is direct. In the Tunis Lagoon, Tunisia, populations are most abundant in summer, but in the Indian River Lagoon, Florida, peak densities were seen in summer and late winter-early spring (Ben Amor et al. 2010; Nelson and Demetriades 1992). Reported sizes for adults range from 6 to 16 mm (Harrison and Holdich 1984).

Sphaeroma walkeri inhabits sheltered marine coastal waters in warm-temperate to tropical climates. It occurs at a temperature range of at least 12 to 30 C and a salinity range of 24 to 40+ PSU (Carlton and Iverson 1981; Nelson and Demetriades 1992). Sphaeroma walkeri is not a substrate-borer, but is a crevice-dweller, living in and under rocks, wood, and in fouling communities on jetties, pilings, floats, buoys, and vessel hulls (Miller 1968; Carlton and Iverson 1979; Harrison and Holdich 1984; Nelson and Demetriades 1992). In the Indian River Lagoon, Florida, S. walkeri was very abundant in reefs created on jetties by the sabellarid polychaete Phragmatopoma lapidosa (Nelson and Demetriades 1992). In the Tunis Lagoon, Tunisia, it was more abundant in and among sponges (Ben Amor et al. 2010). The feeding habits of this species are unknown; however Loyola e Silva (1980, cited by Carlton and Iverson 1981) suggested that their likely diet is algae and associated microfauna.

Sphaeroma walkeri has been found at high densities in some of its introduced habitats, including those in Florida (Nelson and Demetriades 1992) and southern California (Carlton and Iverson 1981), but its impacts on coastal biota are unknown.

Menzies, Robert J.; Glynn, Peter W. (1968) The common marine custaceans of Puerto Rico, Studies of the Fauna of Curacao and other Caribbean Islands 27: 1-33