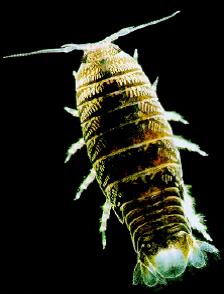 Eurylana arcuata is a marine isopod, which is native to New Zealand. It was first described from Australia, but is believed to be introduced there. Introduced populations are also known from San Francisco Bay, California. It inhabits intertidal and shallow subtidal habitats, including soft mud, sandy beaches, rocks, boulders, and floating docks. No ecological or economic impacts have been reported from introduced locations.

The marine isopod Eurylana arcuata was first described from Port Jackson, New South Wales, Australia. However, its range and abundance in Australia is limited, with most collections being in the vicinity of Sydney, Newcastle, and Twofold Bay, while it is more abundant and widespread in New Zealand (Jansen 1981; Bowman et al. 1981; Bruce 1986; Bruce 2001). Eurylana arcuata has also been reported from many sites along the coast of Chile (Menzies 1962). However, specimens from Chile showed some minor morphological differences from those in Australia and New Zealand (Bowman 1981; Bruce 1986). Tentatively, we follow Bruce (1986) in treating New Zealand as the likeliest native region. However, further morphological and molecular studies will be needed to determine the origin of this isopod. It is clearly introduced on the West Coast of North America, where it is only known from San Francisco Bay, where it was first collected in 1978 (Bowman et al. 1981; Cohen and Carlton 1995).

Eurylana arcuata was first collected on the West Coast on the intake screens of the Oleum Power Plant, in Rodeo, California, in San Pablo Bay on May 16, 1978 (USNM 1163795, U.S. National Museum of Natural History 2015; Bowman et al. 1981). It was collected in only 8 of 52 samples at this power plant in May 1978 to April 1979, and was not seen in samples from four other power plants on the Bay. Other collections were from floating docks on Coast Guard Island, Oakland, in San Francisco Bay, in 1993-1994 (Cohen and Carlton 1995), and from Mears Beach, in San Pablo Bay in January 2004 (CAS-IZ 111591.00, California Academy of Sciences 2015). Likely vectors for introduction are ballast water or hull fouling.

Eurylana arcuata is abundant and widespread in New Zealand, and is regarded as a native species (Jansen 1981; Bruce 1986; Bruce 2001). In Australia, it appears to be rare and confined to port areas in the southeastern corner of the continent, in South Australia, Victoria and New South Wales. Although it was described from Port Jackson, near Sydney in 1925, it is treated as an introduced species there (Bowman et al. 1981; Bruce 1986; Furlani 1996). Menzies (1962b) identified isopods from a 1948-1949 expedition to Chile as Cirolana concinna and C. robusta. Bowman et al. (1981) considered these and later specimens from Chile to be synonymous with E. arcuata, although he and Bruce (1986) noted small morphological differences. The Chilean Eurylana spp. could represent an introduction to the Chilean coast, a cryptic species, or an alternative native region for the species (Bowman et al. 1981; Bruce 1986). We have treated the Chilean occurrences as cryptogenic, but further molecular studies may change the status of these populations.

Eurylana arcuata is a marine isopod of the family Cirolanidae, which are characterized by a rather streamlined elliptical-oval cephalothorax (peraeon) but a distinct abdomen (pleon) of 4-5 segments, which is more rectangular in outline. Like many cirolanids, it has fairly prominent eyes, a large telson, and outward-spreading uropods. The coxal plates are prominent in a side view. The cephalon (head-shield) of Eurylana arcuata lacks a rostrum. The frontal lamina of the head is wider than long, and expanded anteriorly. The clypeus, forming the front of the 'face', is narrow, with concave sides, and is at an acute angle to the frontal lamina, projecting downward in lateral view. Segment 2 of Antenna 1 is the longest segment in the peduncle. Antenna 1 reaches back to the middle of pereonite 1. Antenna 2 is longer, extending back to the middle of pereonite 2 or the posterior edge of pereonite 3. The coxal plates increase in size posteriorly, with lateral and posterior margins rounded. The pereiopods are robust, and armed with setae and spines. The telson is triangular, but with a broad rounded apex, lined with fined setae and short, stout spines. Adults are 10.5 to 19 mm in size. A photographed specimen is dark brown, with yellow-brown edging between peraeonites and pleonites. Description based on: Schultz 1969, Bowman et al. 1981, Jansen 1981, Bruce 1986, Bruce 2001, and Brusca et al. 2007.

Eurylana arcuata is a marine isopod with separate sexes and internal fertilization. Eggs are brooded in a ventral pouch covered by plates, called oostegites, which arise from the base of the pereiopods on peraeonal segments 1-5. Development is direct, and the young hatch as postlarvae, in which the last peraeonal segment and its pair of pereiopods are undeveloped (Schultz 1969; Barnes 1983).

Eurylana arcuata is known from intertidal and shallow subtidal habitats, including soft mud, sandy beaches, rocks, boulders, and floating docks (Menzies 1962; Bowman et al. 1981; Jansen 1981; Bruce 1986). It is associated with cold-temperate to warm-temperate climates, and mesohaline to euhaline salinities. In San Francisco Bay, it was collected at 7.9 to 22.4°C, and 6.8 to 26.2 PSU (Bowman et al. 1981). Isopods of the family Cirolanidae are well-known as scavengers, often attacking dead or injured fishes, and can be pests in fish nets or traps (Bruce 2001; Brusca et al. 2007).

No ecological or economic impacts have been reported from introduced populations of Eurylana arcuata.