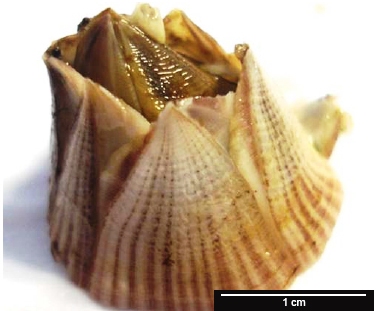 The Reticulated Barnacle, Amphibalanus reticulatus, was first described from southern Japan and is native to the Indo-Pacific region. It has been introduced by shipping to tropical and subtropical waters of the Eastern Pacific, both sides of the Atlantic, and the Eastern Mediterranean. It prefers saline (30-40 PSU), subtidal habitats in warm seas and can be found on a wide range of hard surfaces, including ships' hulls, docks, pilings, mangroves, rocks, oysters, and other shellfish. Amphibalanus reticulatus can have economic impacts through the frequent fouling of ships' hulls and marine structures and is thought to compete with other barnacle species for settlement space.

Amphibalanus reticulatus was described from southern Japan, and is native to the Indo-Pacific region. The precise boundaries of its native region are uncertain, because of its similarity to A. amphitrite, A. venustus, and A. variegatus. It has been introduced by shipping to tropical-subtropical waters of the Eastern Pacific (Laguna 1985; Coles et al. 1999; Carlton et al., 2011), both sides of the Atlantic, and the eastern Mediterranean.

In the western Atlantic, Amphibalanus reticulatus was first collected in Guyanilla, Puerto Rico in 1956 (Henry and McLaughlin 1975). It was first found to be established in Biscayne Bay, Florida, in 1969 (Moore et al. 1974). It now occurs from the St. Johns River estuary, Florida (Ruiz et al. unpublished data) through the Indian River Lagoon (McPherson et al. 1984) to Biscayne Bay and the Caribbean (Southward 1975; Bacon 1976).

In the Gulf of Mexico, Amphibalanus reticulatus was first reported from pilings and oil platforms in Louisiana in 1972 (Thomas 1975, cited by Carlton et al. 2011), and in Apalachee Bay, Florida in 1976 (Spivey 1979). This barnacle may have been present in the Gulf as early as the 1950s, but was misidentified as A. amphitrite (Carlton et al. 2011). By 1986, it was abundant from Timbalier Bay, Louisiana to Sabine Bay, Texas (Gittings et al. 1986). It has been collected in Texas from Galveston Bay, Aransas Bay, and Corpus Christi Bay (Gittings 1985; Gittings et al. 1986; Ruiz et al., unpublished data), but it is more abundant in the more turbid waters off Louisiana (Gittings et al. 1986).

Amphibalanus reticulatus was first collected in the Hawaiian Islands at Pearl Harbor in 1929 (Henry and McLaughlin 1975; Carlton and Eldredge 2009). It is now widespread around Oahu, and is also known from Hilo Harbor, Maui, and Kauai (Coles et al. 2004; Carlton and Eldredge 2009). This barnacle has been partially replaced by Chthamalus proteus in the intertidal zone, and is now confined to a narrow band at and just above low water (Zabin 2009).

Amphibalanus reticulatus is now established from the coast of Panama, north to Mazatlan, Mexico (Laguna 1985) and La Paz, on the Gulf of California (Carlton et al. 2011). It was collected at the Pacific entrance to the Panama Canal, suggesting that the likely invasion route is shipping (Laguna 1985). This barnacle has a broad Indo-Pacific distribution, and has been treated variously as native (Jones 1992) or introduced (Jones 2004) in Australian waters. It is introduced in Pago Pago harbor, American Samoa (Coles et al. 2003).

This barnacle entered the Mediterranean, presumably through the Suez Canal by 1956, and is established in Israel (Henry and McLaughlin 1975; Galil 2007). It has been found on ships in Mediterranean France (in 1967, Zibrowius 1991) and in Belgium (in 1999, Kerckhof and Cattrijsse 2001). In the tropical East Atlantic, it is known from Fajara, the Gambia, Freetown, Sierra Leone and Lagos, Nigeria (Stubbings 1967, cited by Henry and McLaughlin 1975; Kerckhof et al. 2010). In the western Atlantic, after A. reticulatus was first collected in Puerto Rico in 1956, it was found in Trinidad in 1965 (Henry and McLaughlin 1975), and then near the eastern entrance of the Panama Canal (Southward 1975; Spivey 1976). It was first collected in Brazil in 1990 at Recife and was found in 1996 in Rio de Janeiro state (Ferreira et al. 2009). It now occurs in six Brazilian states, Maranhao, Rio Grande do Norte, Pernambuco, Alagoa, Bahia, and Rio de Janeiro (Farrapeira 2010).

Amphibalanus reticulatus usually has a conical or subcylindrical shell, with a toothed orifice. The width of the orifice is usually more than ½ of its height. The plates have a smooth surface, with wide longitudinal spaces (radii), crossed by transverse stripes, giving a net-like appearance, with the ribs narrowing to the tops of the shell plates. The adductor ridge, on the interior face of the scutum is short and high. The tergum has a more pointed apex than A. amphitrite or A. improvisus. The tergal spur is narrow, and the spur length is about 3/10 the length of the basal margin. The spur width is about 1/4 of the basal margin (Henry and McLaughlin 1975). The shell is usually buff or white in color, with dark-purple longitudinal stripes, crossed by many alternating red-and-white transverse lines. Type specimens averaged 18 mm diameter (Henry and McLaughlin 1975). The larval stages of A. reticulatus are described by Thiyagarjan et al. (1997).

Amphibalanus reticulatus is a member of the Amphibalanus amphitrite species complex and can easily be confused with A. amphitrite, A. eburneus, A. ienustus, A. variegatus, A. subalbidus, and other closely related species (Henry and McLaughlin 1975).

Amphibalanus reticulatus prefers saline (30-40 PSU), subtidal habitats in subtropical and tropical seas, although it has been found at sailintiies as low as 10 PSU. It is typically found in sheltered and exposed waters on a wide range of hard surfaces, including docks, pilings, floats, mangroves, rocks, ships' hulls, oysters, and other shellfish (Henry and McLaughlin 1975; Jones 1992; Farrapeira 2008) This species, like many other barnacles, is hermaphroditic, but is capable of cross-fertilization. The fertilized eggs are brooded in the mantle cavity, sometimes for several months, and are released as nauplius larvae with three pairs of appendages. The nauplii feed in the plankton and go through five successive molts, spending at least 4-5 days in the water column before molting into a non-feeding cypris stage, covered with a pair of chitinous shells. Cyprids swim, investigating suitable surfaces, and then settle, secreting a shell, and molting into the first juvenile barnacle stages. Juvenile and adult barnacles are filter feeders, sweeping the water with their long bristled appendages, and gathering phytoplankton, zooplankton, and detritus (Barns 1983).

Amphibalanus reticulatus is a frequent fouler of ships and marine structures worldwide in warm subtropical-tropical waters (Utinomi 1970; Henry and McLaughlin 1975).

Competition- Amphibalanus reticulatus may have replaced or excluded A. amphitrite on the coast of Louisiana (Gittings et al. 1986) and in Hawaiian waters, before it was restricted by the invasion of Chthamalus proteus (Zabin 2009). However, to our knowledge, competitive relationships of A. amphitrite and A. reticulatus have not been studied.

Bacon, Peter R. (1976) The Cirripedia of Trinidad, Studies of the Fauna of Curacao and other Caribbean Islands 163: 1-55

Laguna, Jorge E. (1990) Shore barnacles (Cirripedia, Thoracica) and a revision of their provincialism and transition zones in the tropical Eastern Pacific, Bulletin of Marine Science 46(2): 406-424

Southward, A. J. (1975) Intertidal and shallow water Cirripedia of the Caribbean., Studies of the Fauna of Curacao and other Caribbean Islands 150: 1-153

Zibrowius, Helmut (1991) Ongoing modification of the Mediterranean marine fauna and flora by the establishment of exotic species., Mesogee 51: 83-107