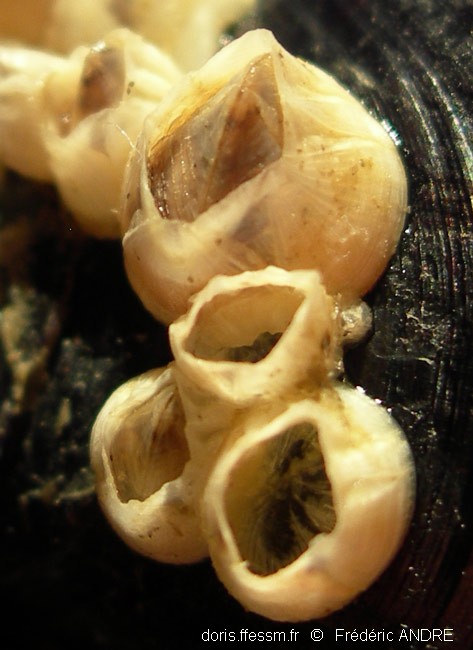 Amphibalanus eburneus, known as the Ivory Barnacle, is native to the Western Atlantic from the southern Gulf of Maine to Venezuela. It is widely introduced around the world and has invaded the Northeast Atlantic, the Indian Ocean, Northwestern Pacific and the Northeastern Pacific. In 2000, an established population was reported for the first time in US Pacific waters, in the Colorado Lagoon, Long Beach, California. Based on its broad tolerances, this species has the potential to expand its range on the Pacific coast. Amphibalanus eburneus fouls cultured oysters and may compete with other benthic invertebrates for space.

Amphibalanus eburneus is native to the Western Atlantic, from the southern Gulf of Maine to Panama, Colombia and Venezuela. It ranges further south, to Uruguay and Argentina (Henry and McLaughlin 1975; Young 1994), where it may be cryptogenic. Based on its range, this barnacle is moderately tolerant of brackish waters and cold temperatures.  Amphibalanus eburneus may have reached the Pacific through the Panama Canal. It was collected on the Pacific coast of northern Colombia in 1924 (USNM 59208, U.S. National Museum of Natural History 2013) and is now common on the Pacific coast of Panama (Laguna 1985). It was collected in the Gulf of California, Mexico, by 1959 (Henry and McLaughlin 1975). In 2000, an established population was reported for the first time in U.S. Pacific waters, in the Colorado Lagoon, Long Beach, California (Cohen et al. 2002; Carlton, personal communication), and in 2010, it was found at two marinas in San Francisco Bay, California (Foss 2011; Ruiz et al. unpublished data). Based on its broad tolerances, this species has the potential to greatly expand its range on the Pacific coast.

In July 2000, A. eburneus was collected in the Colorado Lagoon, part of Alamitos Bay in Long Beach, California. This population is well-established (Cohen et al. 2002; Cohen et al. 2005). Amphibalanus eburneus was established at the Pacific end of the Panama Canal and at several locations on the Mexican coast by 1964 (Matsui et al. 1964; Henry and McLaughlin 1975). The California population may have been transported from Mexican harbors by yachts.

Amphibalanus eburneus has been widely introduced around the world by shipping, and has invaded the Northeast Atlantic, the Indian Ocean, Northwestern Pacific and the Northeastern Pacific (Barnes and Barnes 1972; Henry and McLaughlin 1975; Utinomi 1975; Laguna 1985). On the Atlantic Coast, it became established in the Bay of Biscay, France by 1940 (Barnes and Barnes 1972; Golletquer et al. 2002). Further north, it was first collected in Dutch waters as early as 1895, but sporadically appeared and disappeared, and does not seem to be established there (Wolff 2005). Amphibalanus eburneus has become established in the seas of southern Europe, entering the Mediterranean by 1863, and reaching the Black Sea by 1895 (Relini and Matricardi 1999; Kocak and Kucuksezgin 2000; Gomiou et al. 2002; Innocenti 2006). This barnacle has colonized the Caspian Sea via canals and ballast water (Grigorevich et al. 2003), but has also invaded oceanic islands, including Bermuda (in 1962, Henry and McLaughlin 1975) and the Azores (Southward 1998).

Amphibalanus eburneus was collected in Manila, the Philippines, before 1916 (Pilsbry 1916), but its expansion into the Northwest Pacific was not documented until after World War II. It appeared in Tokyo Bay in 1950 (Utinomi 1970), and eventually spread north to Vladivostok, Russia and south to Hong Kong (Utinomi 1975; Rainbow 1990, Kim 1992; Zvyaginstsev 2003). Amphibalanus eburneus was collected at Enewetak Atoll in the Marshall Islands in 1967 (Zullo et al. 1972), possibly brought there during World War II or during post-war atomic bomb tests. It was first collected on Guam in 2000, where it was found in an estuary and near freshwater seeps (Paulay et al. 2002; Paulay and Ross 2003). It has also become established at several points along trade routes between Europe and Asia, including the Suez Canal (in 2003, Emara and Belal 2004) and in Mumbai and Madras, India (Daniel 1955 in Matsui et al. 1964; Henry and McLaughlin 1975).

Amphibalanus eburneus has a shell which varies from conical to cylindrical, depending on the amount of crowding. The orifice is round or slightly toothed, and its width is usually more than ½ its height. The plates have wide longitudinal spaces (radii), narrowing towards the top of the shell plates, while the tops (summits) of the shell plates are thick and rough (Henry and McLaughlin 1975). Inside the operculum, the scutum has thick growth ridges. The tergum has a blunt apex, and a broad spur, with a length only a little greater than its width. The basal margin of the tergum curves inward beside the spur, and then curves outward to form a protuberance with prominent ridges, forming a jagged edge (Henry and McLaughlin 1975). This barnacle can grow to 40 mm diameter and 30 mm height (Henry and McLaughlin 1975), but adults more typically reach 25 mm basal diameter (Gosner 1978). It is characteristic of sheltered estuarine habitats, and tolerates considerable salinity variation (Henry and McLaughlin 1975). The larval stages are described and illustrated in Lang (1979) and Lang (1980).

Amphibalanus eburneus, like many other barnacles, is hermaphroditic, but is capable of cross-fertilization. The fertilized eggs are brooded in the mantle cavity, sometimes for several months, and are released as nauplius larvae with three pairs of appendages (Barnes 1983). Broods of A. eburneus in culture ranged from ,1000 ro 13,000 eggs (El-Komy and Kajihara 1991). The nauplii feed in the plankton and go through five successive molts, spending four to 18 days in the water column before molting into a non-feeding cypris stage, covered with a pair of chitinous shells (Scheltema et al. 1982). Cyprids swim, investigating suitable surfaces, and then settle, secreting a shell and molting into the first juvenile barnacle stages. Juvenile and adult barnacles are filter feeders, sweeping the water with their long bristled appendages that gather phytoplankton, zooplankton, and detritus. Amphibalanus eburneus has seven larval stages, as in other Thoracica: a non-feeding nauplius I, feeding nauplius stages II-VI, and a nonfeeding cyprid, the settling stage (Costlow and Boukhout 1957). Larval development period is based on laboratory experiments with larvae from Woods Hole, Massachusetts. The longest larval development, 18 days, was observed at 20ºC with a low food concentration, the shortest, four days, at 30ºC with high food availability (Scheltema and Williams 1982).

Based on its native range, Amphibalanus eburneus survives in estuaries prone to some winter ice cover, and also survives warm tropical temperatures (Henry and McLaughlin 1975). Its requirement for a temperature of ~20+ºC for larval development (Scheltema et al. 1992) may limit its range. This is suggested by its sporadic appearances in shallow, warm habitats at the northern edges of its range in the Sea of Japan (Zvyaginstsev 2003), the Netherlands (Wolff 2005) and Atlantic France (Barnes and Barnes 1972). Carlton et al. (2011) predict that with climate change, A. eburneus will move north into Maine. Amphibalanus eburneus can be found in marine and estuarine environments from the shallow subtidal to 37 m. Individuals settle on mangroves, mollusk shells, wood, rocks, harbor installations and ships (Wells 1966; Henry and McLaughlin 1975; Laguna 1985).

In a survey of barnacles in the upper and middle Chesapeake Bay, Amphibalanus eburneus was collected at salinities as low as 8 PSU, but was the least abundant species (Kennedy and de Cosimo 1983). This barnacle is most abundant in lower portions of the Bay (Ruiz et al., unpublished data). In a Trinidad mangrove swamp, A. eburneus occurred and reproduced at 6-40 ppt (Bacon 1971). Settlement of cyprids from Chesapeake Bay occurred at salinities of 5-35 ppt (Dineen and Hines 1994). In the Loxahatchee River estuary, Indian Lagoon, Florida, A. eburneus was common at sites with average salinities of 22-32 ppt, and rare at average salinities as low as 19 ppt (SEM ± 3 ppt) (McPherson et al. 1984).

We have not found specific reports of economic impacts for Amphibalanus eburneus. However, A. eburneus is an abundant fouling species in its native range on the East and Gulf Coasts of the U.S. (Visscher 1927; Moore and Frue 1959; Utinomi 1970; Relini and Matricardi 1999; Kocak and Kucuksezgin 2001) and it can be a major contributor to growth/biofouling on the surfaces of ships and harbor structures. It is also a common fouling organism in oyster beds, and a potential competitor with oysters for space and food (White and Wilson 1996). Hull fouling by barnacles and other organisms has costly impacts for shipping lines by increasing fuel costs, decreasing maneuverability, and clogging internal seawater piping (Visscher 1927; Haderlie 1984). Barnacles also greatly contribute to fouling of navigational buoys and coastal power station intakes (Haderlie 1984).

In its native waters on the Atlantic and Gulf coasts, A. eburneus is considered a potential fouling organism and competitor of the Eastern Oyster (Crassostrea virginica) (White and Wilson 1996). In the southern Caspian Sea, a mass population boom of A. eburneus is reported to have adversely affected molluscs and hydroids, due to competition for space and planktonic food (Zaitsev and Ozturk 2001).

Bacon, P. R. (1971) The maintenance of a resident population of Balanus eburneus in relation to salinity fluctuations in a Trinidad mangrove swamp, Journal of Experimental Marine Biology and Ecology 6: 187-198

Bacon, Peter R. (1976) The Cirripedia of Trinidad, Studies of the Fauna of Curacao and other Caribbean Islands 163: 1-55

de Montaudouin, Xavier; Sauriau, Pierre-Guy (2000) Contributions to a synopsis of marine species richness in the Pertuis-Charentais Sea with new insights into the soft-bottom macrofauna of the Marennes-Oleron Bay, Cahiers de Biologie Marine 41: 181-222

Honma, Y.; Nakajima, J. (1973) Studies on gonad maturity in some marine invertebrates - 8.Structure of reproductive and related organs of a foreign barnacle, Balanus eburneus, that appears in Lake Kamo-ko, Sado Island., Bulletin of the Japanese Society of Scientific Fisheries 39(4): 357-365

Laguna, Jorge E. (1990) Shore barnacles (Cirripedia, Thoracica) and a revision of their provincialism and transition zones in the tropical Eastern Pacific, Bulletin of Marine Science 46(2): 406-424

Pilsbry, Henry A. (1889) New and little-known American molluscs. No. 1., Proceedings of the Academy of Natural Sciences of Philadelphia 41: 81-89

Simmons, Ernest G. (1957) An ecological survey of the Upper Laguna Madre of Texas, Publications in Marine Science of the University of Texas 4(2): 156-200

Southward, A. J. (1975) Intertidal and shallow water Cirripedia of the Caribbean., Studies of the Fauna of Curacao and other Caribbean Islands 150: 1-153

Southward, A. J. (1998) New observations on barnacles (Crustacea: Cirripedia) of the Azores regions., Arquipelago. Life and Marine Sciences 16A: 11-27

Yamanishi, Ryohei; Yokoyama, Hisashi; Ariyama, Hiroyukii (1991) Distributional and seasonal changes of intertidal attaching organisms in relation to water quality along the brackish reaches of the Yodo River., Occasional Papers from the Osaka Museum of Natural History 2(7): 83-96