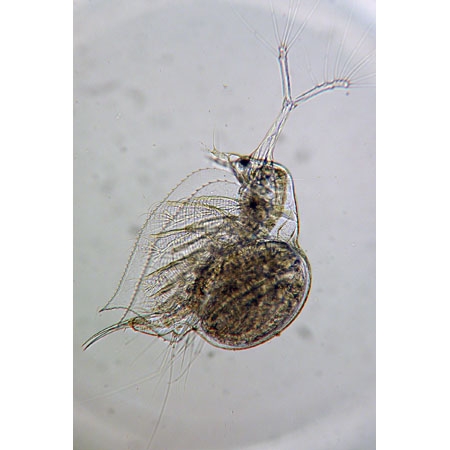 Penilia avirostris is a marine cladoceran that is widely distributed in coastal regions throughout the world. It was described from Brazil in 1849, but its true native range is still unknown. In North America, it is found on the East, West and Gulf coasts. In recent years, its range has expanded with increased water temperatures, but the only known introduction is in the Gulf of St. Lawrence, Canada. It is the only cladoceran which is restricted to fully marine habitats. No impacts have been reported in introduced locations.

Penilia avirostris is widely distributed in coastal regions around the world, including tropical, subtropical, and warm-temperate regions. It was described from Brazil by Dana in 1849, but its native range is difficult to discern. It was collected on both sides of the Atlantic, the Mediterranean and Black Seas, the Indian Ocean, and the western Pacific by 1933 (Ramner 1933, cited by Dolgopol'skya 1959). This species shows little geographic genetic structure, supporting the idea that it is a fairly recent colonizer of the world's oceans, perhaps in the Pleistocene or Holocene (Durbin et al. 2008). It is adapted to marine environments, and cannot survive in freshwater (Aladin 1981).

In the temperate Northwest Atlantic, P. avirostris was studied in Beaufort, North Carolina in the 1890s (Sudler 1898, cited by Colton 1985), which was its apparent northern limit. In the 20th century, it was collected progressively northward, Delaware Bay in 1931, Block Island Sound and Woods Hole in 1943, and Nantucket Shoals in 1981 (Lochhead 1954; Colton 1985). In 1981, isolated patches occurred on Georges Bank. This range extension appears related to increased water temperatures, but run counter to prevailing currents. Colton (1985) suggested transport of resting eggs by birds, or in the cooling systems of fishing boats as possible vectors. Recent evidence suggests that it is introduced on Prince Edward Island, Gulf of St. Lawrence, Canada (Bernier and Locke 2006).

Penilia avirostris has been found in ballast water of ships docked in Puget Sound, where this species is absent in the estuary (Cordell et al. 2009; Cordell and Kalata 2015). A collection of a few specimens in the Bering Sea (Onbe et al. 1996) is probably due to dispersal by warm currents from the coast of Asia to the south.

While natural northward range extensions in the Northeastern and Northwestern Atlantic could involve currents, a localized occurrence of P. avirostris in Colville Bay, Prince Edward Island (Gulf of St. Lawrence, 46°N, 52°W) in 2000, is likely a ballast introduction (Bernier and Locke 2006). This cladoceran was found in increased densities in 2001 (up to 27.5 m-3), with juveniles and males present, indicating that population was producing resting eggs. This population is 5 degrees north of the nearest previous occurrence. The nearby port of Souris receives local boat traffic, but little international shipping. Ballast water from ships entering the St. Lawrence Seaway is a possible source (Bernier and Locke 2006).

Penilia avirostris has been caught sporadically in the Caspian Sea since 1985, but the establishment of populations is unknown (Aladin 2002, Shiganova et al. 2005; Shiganova 2010). These animals were probably introduced in the ballast water of ships coming from the Black Sea by the Volga-Don Canal.

Penilia avirostris is the only fully marine filter-feeding cladoceran. The other seven species of marine cladocerans belong to the family Podonidae, and are distinguished by a single large eye, closed carapace, and claw-like, raptorial appendages. In contrast, P. avirostris has a bivalve carapace, open ventrally, a small compound eye, and six pairs of feathery, filter-feeding appendages. The carapace is roughly oval, with ventral posterior edges prolonged into triangular spines. The ventral edges of the carapace are lined with fine spines. The head is distinct, with a downward-pointing rostrum, resembling a bird's beak (whence the species name). The abdomen bends sharply, ventrally, at the end of the carapace, and ends in two long spines. The antennule is weakly developed in the female. The antenna is biramous, and is as long as the carapace. Adult parthenogenetic females have a dorsal brood chamber, which contains developing embryos (Johnson and Allen 2005). Fertilized females produce a pair of large, oval resting eggs. Females range from 0.4 to 1.2 mm in body length. Description based on: Dolgopol'skya 1959; and Johnson and Allen 2005.

Females reproduce parthenogenetically, through much of the season, so males are usually rare. The male is distinguished by its lack of a rostrum; its long antennules, which are nearly as long as the carapace; curved hook-like setae on the first pair of thoracic legs; and two long penises, at the posterior end of the body. Males are 0.7-0.9 mm in length. Description based on Dolgopol'skya 1959; Egloff et al. 1997; and Johnson and Allen 2005.

Penilia avirostris is the only filter-feeding marine cladoceran. During most of its annual cycle, the whole population is female. Newborn females develop a dorsal brood-pouch, in which eggs are deposited. Unlike most freshwater species, the brood-pouch is closed, and nutrients are provided to the young through a placenta-like arrangement. The number of embryos varies with body size and environmental conditions, from 1-17 embryos. Development time varies with temperature and food supply, but was about 2-3 days at 21-25 C (Paffenhofer and Orcutt 1986, cited by Egloff et al. 1997; Miyashita et al. 2010). Release of embryos occurs throughout the diel cycle, but is more frequent at night (Wong et al. 2008). Young females are born at about 0.320-450 mm (Atienza et al. 2008; Egloff et al. 1997), and grow for 2-3 days before eggs are deposited in the brood pouch.

In temperate regions, the cycle of occurrence of P. avirostris is strongly seasonal, August-October in Prince Edward Island (Bernier and Locke 2006), July-October in Narragansett Bay (Fofonoff 1994), and July-December in Spain (Atienza et al. 2008; Piontkovski et al. 2012). In tropical regions, this species can occur year-round (Miyashita et al. 2010; Piontkovski et al. 2012). In temperate regions, males tend to appear near the declining end of the population cycle (Egloff et al. 1997; Atienza et al. 2008), while in tropical regions, they may occur year-round (Miyashita et al. 2010). Fertilized females produce two large, oval, resting eggs, which develop in the brood pouch. When the female dies, the eggs fall into the sediment. The eggs may hatch when conditions are suitable. Eggs from sediments in Japan hatched best at salinities above 28 PSU and temperatures above 18 C, although some hatching occurred at 12 C and 19 PSU (Egloff et al. 1997). Abundant populations occur in the Black Sea at 18 PSU and the Red Sea up to 43 PSU (Lochhead 1964).

Penilia avirostris reaches high abundances (> 1000 m-3) in its native range and in some introduced locations (e.g. North of Cape Hatteras in the Northwest Atlantic) (Colton 1985; Johns et al. 2005), and may play an important role as a grazer of small phytoplankton (2 - 20 μm diameter) (Atienza et al. 2006). However, in the two regions in which it has been definitely introduced, Colville Bay (Prince Edward Island, Bernier and Locke 2006) and the Caspian Sea (Shiganova et al. 2010) abundances are probably too low to have significant impacts.

Calliari, Danilo; Tiselius, Peter (2009) Organic carbon fluxes through the mesozooplankton and their variability at different time-scales in the Gullmarsfjord, Sweden, Estuarine, Coastal and Shelf Science 85: 107-117

Colton, J. B. (1985) Eastward extension of the distribution of the marine cladoceran (Penilia avirostris) in the northwest Atlantic: a case of ecesis?, Journal of Northwest Atlantic Fisheries Science 6: 141-148

Lochhead, John H. (1954) On the distribution of a marine cladoceran, Penilia avirostris Dana (Crustacea, Branchiopoda), with a note on its reported bioluminescence, Biological Bulletin 107: 92-105

Shiganova, Tamara (2010) Biotic homogenization of inland seas of the Ponto-Caspian, Annual Review of Ecology and Systematics 41: 103-125