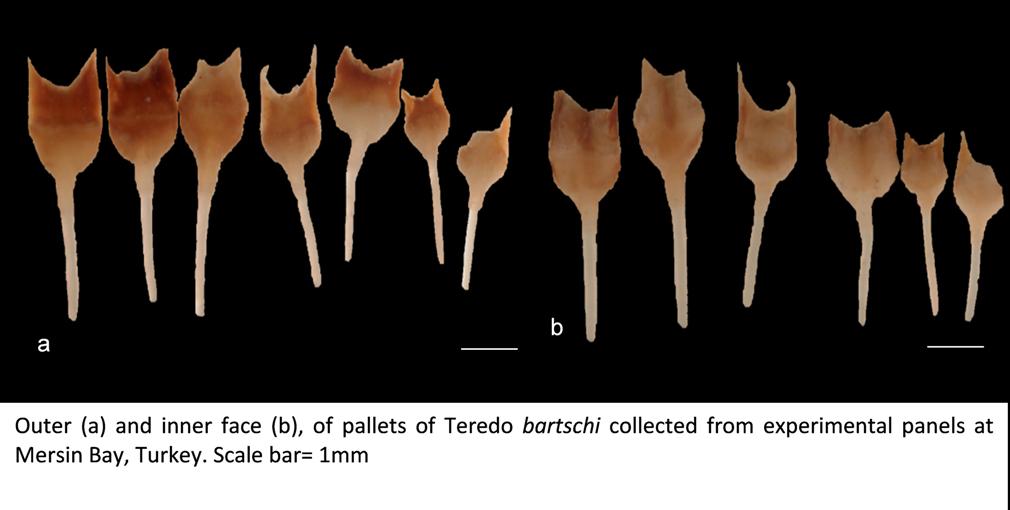 Teredo bartschi is commonly known as the Bartsch Shipworm. Shipworms are highly modified mollusks adapted for boring into wood. Although it was first described from Tampa, Florida, it is widespread throughout tropical and subtropical seas, making its native origin difficult to determine. For this reason, it is considered cryptogenic throughout most of its global range. Introduced populations are known from Mexico, California, and Hawaii. This species has been reported from fixed wood structures, panels, driftwood, and mangroves in tropical and subtropical climates, and in heated power plant effluents in temperate waters. It is one of many shipworms contributing to the rapid riddling of wood in tropical and subtropical waters. Its impacts in these warm waters are difficult to assess, however, in some areas it can cause extensive damage to wooden marine infrastructure.

Teredo bartschi is widespread in tropical and subtropical seas, and has been reported from Florida, Bermuda, throughout the Caribbean to Brazil, Hawaii, Australia, Iraq, Ghana, Kenya, and Fiji (Wallour 1960; Turner 1971; Barreto 2000; Borges et al. 2014a; Borges et al. 2014b). Although it was first described from the southeastern United States with type specimens from Tampa, Florida and occurrences reported from South Carolina to Texas (Clapp 1923), it is regarded as cryptogenic in Atlantic waters south of Cape Hatteras, and over most of its tropical-subtropical range (Carlton and Ruckelshaus 1997). Occurrences in the Pacific Coast of Mexico, California, the eastern Mediterranean, and Portugal are probable introductions (Abbott 1974; Hendrickx 1980; Borges et al. 2014a; Borges et al. 2014b).

Teredo bartschi was collected in Mexican Pacific waters in the Gulf of California in 1971 at La Paz, and in 1978 in Sinaloa, 30 km north of Mazatlan (Hendrickx 1980). It is known in California waters from specimens collected in San Diego in 1927, and in 2000 it was collected in Long Beach Harbor (Cohen et al. 2002).

Teredo bartschi is cryptogenic in the northwest Atlantic. Its northern breeding limit in the Western Atlantic was believed to be South Carolina (Clapp 1923; Turner 1971), but its range has been extended by transport via boats and by the heated effluents of power plants (Hoagland and Turner 1980; Hoagland 1986a). In 1944–52, it was found in test boards at Norfolk Naval Shipyard, Portsmouth VA (Brown 1953). There are no further records from Chesapeake Bay. In 1973, breeding populations of T. bartschi were found in Barnegat Bay NJ, in Oyster Creek and Forked River, where they became very abundant, and damaging to wooden structures. These creeks were receiving heated effluent from the Oyster Creek Nuclear Generating Station (Hoagland and Turner 1980; Richards et al. 1984). The abundance of T. bartschi was reduced following a powerplant shutdown in the winter of 1979–1980 (Richards et al. 1984). This shipworm has not been collected to our knowledge since 1982 (Hoagland 1986a; Hillman et al. 1990; Carlton 1992). In 1979, it was found in thermal effluents of the Millstone Nuclear Power Plant Waterford, Connecticut (Hoagland 1986a; Hoagland 1986b). The populations here remained small (Hoagland 1986b) and were no longer present by 2000 (James T. Carlton, personal communication 2000). These isolated populations of subtropical shipworms are very vulnerable to winter shutdowns of powerplants and are likely to be sporadic.

On the Atlantic coast of Europe, T. bartschi was found to be established in the Ria Formosa, Olhao, Portugal, in the Gulf of Cadiz, in 2002 (Borges et al. 2014a). It was first found in the Mediterranean in Port Said, Egypt, at the mouth of the Suez Canal in 1935 (Roch 1935, cited by Turner 1966); and has been found in Mersin Turkey, on the Levantine Coast 2002–2003 (Borges et al. 2014a). In 2002, T. bartschi was collected in the Lagoon of Venice and has survived at least through to 2017 despite temperatures near 0°C (Tagliapetra et al. 2021). The range of this shipworm can be expected to expand with rising sea temperatures.

Teredo bartschi belongs to the family Teredinidae (shipworms), which are highly modified mollusks, hardly recognizable as bivalves, and adapted for boring into wood. The shell is reduced to two small, ridged valves covering the head, and used for grinding and tearing wood fibers. The body is naked and elongated and ends with two siphons protected by elaborate calcareous structures called pallets (Turner 1966). In T. bartschi, the shell resembles that of the Naval Shipworm (T. navalis), but is smaller, with the auricle of the shell semicircular rather than subtriangular. The pallets have a long stalk, with a short blade deeply excavated at the tip, forming a U-shape. The distal third of the cap is made of periostracum, which is light golden to dark brown and semitransparent, extending at the corners to form small horns. The calcareous base can be seen through the periostracum and resembles an hourglass. Description from: Turner 1966; Turner 1971; Abbott 1974.

The type specimen ofT. bartschi had a shell 4.2 mm long and 4 mm high, while the pallets were 5 mm long with a stalk 3 mm long (Clapp 1923). Teredo bartschi can reach maturity at a length of 4mm and reach a maximum size of 132mm in Barnegat Bay, New Jersey (Hoagland 1983).

Potentially misidentified species—The diversity of shipworms in tropical waters is very great. Many are now widely distributed in the Atlantic, Pacific, and Indian Oceans, largely because of shipping. The species listed below have been reported from Florida, the Caribbean, the West Coast of North America, or Hawaiian waters.

Shipworms dig long burrows in submerged wood in marine environments. They burrow by rocking and abrading the wood fibers. The mantle covers most of the length of their body and secretes a calcareous lining along the interior of the burrow. They normally have their anterior end with head and shells inside the burrow, and their siphons protruding. The pallets plug the burrow when the siphons are retracted (Barnes 1983).

Shipworms are protandrous hermaphrodites, beginning life as male and transforming to female, but they have no capacity for self-fertilization. Males release sperm into the water column which fertilizes eggs for the female. The fertilized eggs are then brooded in the gills. Larvae are retained in the gills to the veliger stage (Hoagland 1986a; Richards et al. 1984). The larvae of Teredo bartschi are planktonic for about 3 days. They settle in the pediveliger stage, and then rapidly metamorphose and begin boring into wood within 2-3 days. They quickly develop a calcified shell, pallets, and burrow lining (Turner and Johnson 1971). Shipworms may obtain some (or most, Paalvast and van der Velde 2013) of their nutrition from plankton, but some comes from wood, which consists of cellulose. Symbiotic bacteria fix nitrogen, essential for protein synthesis (Turner and Johnson 1971; Barnes 1983).

Teredo bartschi is known from fixed wood structures, panels, driftwood, and mangroves in tropical and subtropical climates, and in heated power plant effluents in temperate estuaries (Wallour 1960; Hoagland and Turner 1980; Ibrahim 1981; Hoagland 1983; Singh and Sasekumar 1994). Teredo bartschi is sensitive to low temperatures. There was only 18–20% survival of newly settled juveniles at 10°C and adults became inactive at 13–17°C and died at 3°C (Hoagland 1986a). In temperate regions, its survival is dependent on warm effluent waters. Adult shipworms can tolerate salinities as low as 7 PSU (Hoagland 1986a) and as high as 45 PSU (Cragg et al. 2009). Larvae, reared at 22 PSU and 24°C, survived transfer to 12 and 35 PSU, and to 20 and 3°C (Hoagland 1986a).

Teredo bartschi is one of many shipworms contributing to the rapid riddling of wood in tropical and subtropical waters. Its impacts in these warm waters are difficult to assess, because of the diversity of the shipworm community. However, in the temperate waters of New Jersey where it was restricted to areas warmed by thermal effluents, it reached high abundance and caused extensive damage to marinas near the Oyster Creek Nuclear Power Plant in Barnegat Bay (Turner 1973; Hoagland and Turner 1980).

Hendrickx, Michel E. (1980) Range extensions of three species of Teredinidae (Mollusca: Bivalvia) along the Pacific coast of America, The Veliger 23(1): 93-94

Nair, N. Balakrishnan (1984) The problem of marine timber destroying organisms along the Indian coast, Proceedings of the Indian Academy of Sciences 93(3): 203-223

Rai Singh, Harinder Sasekumar, A. (1994) Distribution and abundance of marine wood borers on the west coast of Peninsular Malaysia., Hydrobiologia 285: 111-121