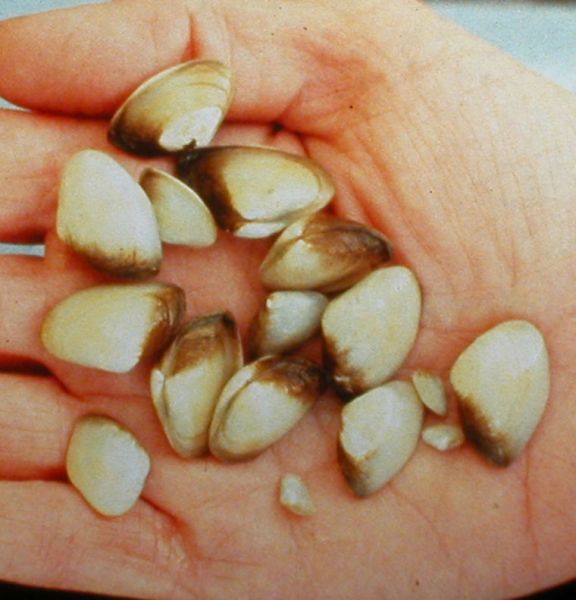 Corbula amurensis is commonly known as the Asian Brackish-water Clam, the Overbite Clam, and the Brackish-water Corbula. It is native to estuarine habitats from Russia to southern China. Outside of its native range, it is only known from San Francisco Bay, California. It was first collected from the inner brackish regions of the estuary in 1986 and rapidly increased its biomass. It occurs in sand, mud, and clay substrates, usually in shallow subtidal environments, but can also be abundant in intertidal mudflats. It has been listed by the Invasive Species Specialist Group of the World Conservation Union (IUCN) as one of the '100 worst invasive species’. Its economic and ecological impacts are mixed. Declines in many recreationally important fish stocks, as well as native endangered species, have been attributed, in part, to the food-web changes caused by the C. amurensis invasion, although these effects are difficult to separate from the many other human impacts on the inner Bay-Delta system.

Corbula amurensis (Asian Brackish-water Clam) is native to estuarine habitats of the Northwest Pacific from the Russian Far East to southern China (Coan 2002). Outside of its native range, it is only known from the San Francisco Bay estuary, California (Carlton et al. 1990, Cohen 2005).

Corbula amurensis was first collected in Grizzly Bay, in the inner brackish regions of the San Francisco estuary in 1986. By late 1987, it had spread upstream to the outer edge of the Sacramento-San Joaquin Delta (Winder et al. 2011). From 1999 through 2005, the bivalve biomass, dominated by C. amurensis, decreased by 2 orders of magnitude. This was attributed to a cold phase of the El Nino-La Nina oscillation, with increased upwelling and decreased sea-surface temperatures, favoring native cold-water predators, such as shrimp (Crangon spp.), juvenile Dungeness crab (Metacarcinus magister), and English Sole (Parophrys vetulus), resulting in increased predation, decreased bivalve biomass and grazing, and resulting blooms of phytoplankton (Cloern et al. 2007).

Ballast water is the most likely mode of transport for this bivalve to San Francisco Bay, since it has a planktonic larva, spending ~17-19 days in the water column (Nicolini and Penry 2005). However, this species could be spread outside the Bay by other modes of transport. Newly settled larvae and early juveniles secrete byssus threads which can attach to solid particles or surfaces, or to other clams, forming clumps (Nicolini and Penry 2005). Juveniles can be transported in accumulated sediment within fouling communities, and were found in surveys of surplus cargo ships moored in Suisun Bay, which were about to be towed to Texas for ship-breaking (Davidson et al. 2008).

Potamocorbula amurensis is commonly known as the Asian Brackish-water Clam, Overbite Clam, and Brackish-water Corbula. It is a small, thin-shelled bivalve, reaching 20-25 mm length. The shell is triangular to ovate in shape, with the umbos slightly projecting. The right valve is decidedly larger than the left (whence the name Overbite Clam). The beaks are slightly anterior to the midline of the shells, located at about 41% of the length from the anterior to posterior end. The anterior and posterior ends are sharply rounded. The beaks are smooth, while the rest shell surface has low, irregular ribs. The hinge plate is narrow. The right valve has a narrow tooth, which is attached to the shell wall below the hinge-line. The left valve has a long, weakly projecting chondrophore (a spoon-shaped structure, containing the cartilaginous portion of the ligament connecting the shells) that is conspicuously divided, and with a very small tooth on its posterior end. The anteroventral hinge margin is swollen into a low tooth medially. The pallial line has a small posterior sinus. The shell is white on the interior and exterior, but the exterior is covered with a brown periostracum. This is smooth in younger clams, but wrinkled and worn around the margins in older ones. (Description from: Carlton et al. 1990; Coan et al. 2000; Coan 2002; Cohen 2005; Coan and Valentich-Scott in Carlton 2007; Hallan et al. 2013)

This clam is characteristic of intertidal and shallow-water mud, sand, or clay, often in brackish and estuarine waters (Carlton et al. 1990; Cohen 2005). The planktonic larvae of CP amurensis are described by Nicolini and Penry (2000).

Potamocorbula amurensis has separate sexes and matures at about 4 mm in length (Parchaso and Thompson 2002), although adults can grow to 20-25 mm (Cohen 2005). Adults mature at a few months age and produce 220,000 eggs (Cohen 2005). Eggs and sperm are released into the water column where they are fertilized. Within 24 hours at 15°C the larvae pass through a blastula stage, reaching a trochophore stage. By 48 hours, they have grown shells and reached the straight-hinge veliger stage. After day 7, the larvae swim less actively, and by day 17, they begin to metaphose and settle at ~ 135 μm in diameter. Viable gametes were produced at 5-25 PSU, and development was fastest at 15 PSU (Nicolini and Penry 2000). Reproduction appears to occur year-round in the San Francisco Bay estuary, and regional variations in peak reproduction appear to reflect water flow and availability of food (suspended organic matter and phytoplankton food), rather than seasonal temperature (Nicolini and Penry 2000; Parchaso and Thompson 2002; Miller and Stillman 2013). At downstream sites in San Pablo Bay, reproduction was most active in dry years, probably reflecting upstream transport of food-rich ocean waters, while at upstream sites in Suisun Bay, reproduction was greatest in wet years when the flux of nutrients and suspended organic matter was greatest (Parchaso and Thompson 2002).

Potamocorbula amurensis occur in sand, mud, and clay substrates, usually with about two-thirds of their body in the sediment, and usually in shallow subtidal environments, though they can be abundant on intertidal mudflats (Carlton et al. 1990; Cohen 2005). It has broad environmental tolerances though it seems most successful under conditions typical of large estuaries with extensive brackish-water regions. The broad latitudinal range of this clam suggests that its temperature tolerance greatly exceeds the seasonal range occurring in San Francisco Bay (Carlton et al. 1990, Cohen 2005). Experimental studies of adult/juvenile temperature tolerance, temperature-salinity interactions, and temperature-salinity effects on larval development are highly desirable. Adult clams are found at 1-30+ PSU, and tolerate a temperature range of 8-23°C in the San Francisco Bay estuary (Carlton et al. 1990; Cohen 2005). Feeding rates and metabolism were highest at a high salinity (28 PSU), compared to a control salinity (13-14 PSU) and low salinity (2 PSU), reflecting higher costs of osmoregulation at high salinity (Paganini et al. 2010).

Corbula amurensis has been listed by the Invasive Species Specialist Group of the World Conservation Union (IUCN) as one of the '100 worst invasive species.' So far, San Francisco Bay is the only area that this clam has invaded, but its ecological and economic impacts may be wide-ranging.

From a human economic point of view, the impacts of the Corbula invasion are mixed. Filtering by the clams has resulted in increased water clarity in the Delta, probably with some aesthetic and recreational benefits. Some recreationally and aesthetically important species, such as sturgeon and diving ducks may be benefiting from increased food supplies, but negative effects from concentrated toxins on the populations and human consumers will be more difficult to detect. Declines in many recreationally important fish stocks, as well as native endangered species, have been attributed, in part to the food-web changes, although these effects are difficult to separate from the many other human impacts on the inner Bay-Delta system. The Corbula invasion is seen as contributing to a general phenomenon of 'Pelagic Organism Decline', in which the energy and nutrients from primary production (phytoplankton) are being shifted from the pelagic foodweb (phytoplankton > small zooplankton > small fishes > gamefishes) to a benthic foodweb (bivalves and other filter feeders > crabs and shrimp > bottom feeding fishes), which is less desirable economically (Sommer et al. 2007; MacNally 2010; Glibert et al. 2011; Winder and Jassby 2011).

The invasion of C. amurensis has had dramatic effects on the San Francisco Bay estuary. A flood in 1986 may have assisted its invasion by eliminating much of the dry-season benthic community from the upstream portions of the estuary. Within a year of its first detection, huge biomasses of this clam had developed, largely replacing the previous dry-season benthic community, which had included the introduced bivalve Mya arenaria (Softshell Clam), the introduced filter-feeding amphipods Monocorophium acherusicum and Ampelisca abdita, and the introduced polychaete Streblospio benedicti. Corbula’s dominance of the benthos has continued through successive periods of drought and flood, owing to its great tolerance of salinity fluctuations (Nichols et al. 1990). In many locations in Suisun and San Pablo Bay, it now comprises 95% of the filter-feeding biomass (Nichols et al. 1990; Cohen 2005).

The development of a huge biomass of filter-feeding bivalves has dramatically altered the food-web of San Francisco Bay, by suppressing phytoplankton blooms in the upstream reaches of the estuary and diverting biomass from the plankton to the benthos, resulting in sharp decreases in chlorophyll, zooplankton biomass, and in turn, the survival of fish larvae, which depend on zooplankton (Alpine and Cloern 1992; Feyrer et al. 2003). The effects on the zooplankton include direct predation as copepod larvae (nauplii) and microzooplankton are filtered out of the water (Kimmerer et al. 1994; Greene et al. 2011) as well as food deprivation. Decreased recruitment of many species of fishes, including the economically important introduced Striped Bass (Morone saxatilis) and the endangered Delta Smelt (Hypomesus transpacificus) has been attributed, in part, to decreased food availability resulting from the huge filtering biomass of C. amurensis (Sommer 2007; MacNally 2010; Glibert et al. 2011). In South San Francisco Bay, this impact was reduced from 1999 to 2005, apparently by a cold phase of the El Nino-La Nina oscillation, resulting in reduced water temperatures, increased predation by cold water predators, greatly decreased biomass of C. amurensis and other bivalves, resulting in phytoplankton blooms (Cloern et al. 2007). However, it is not clear whether these effects have extended to the upstream parts of the estuary, including the Delta.

The invasion of C. amurensis has created a major new food source for predators, including mollusk-eating fishes, such as sturgeons, diving ducks, and others. However, as an efficient filter-feeder, C. amurensis also concentrates toxins, such as selenium, pesticides, etc., from the water column (Cohen 2005). While the invasion has resulted in increased aggregations of diving ducks, e.g. Lesser Scaup (Athya affinis), the toxin load from feeding on the clams may be contributing to decreasing success in breeding on the bird’s nesting grounds (Richman and Lovvorn 2004).

Mountfort, Doug and 5 authors (2012) Development of single and multispecies detection methods for the surveillance and monitoring of marine pests in New Zealand, Aquatic Invasions 7: in press