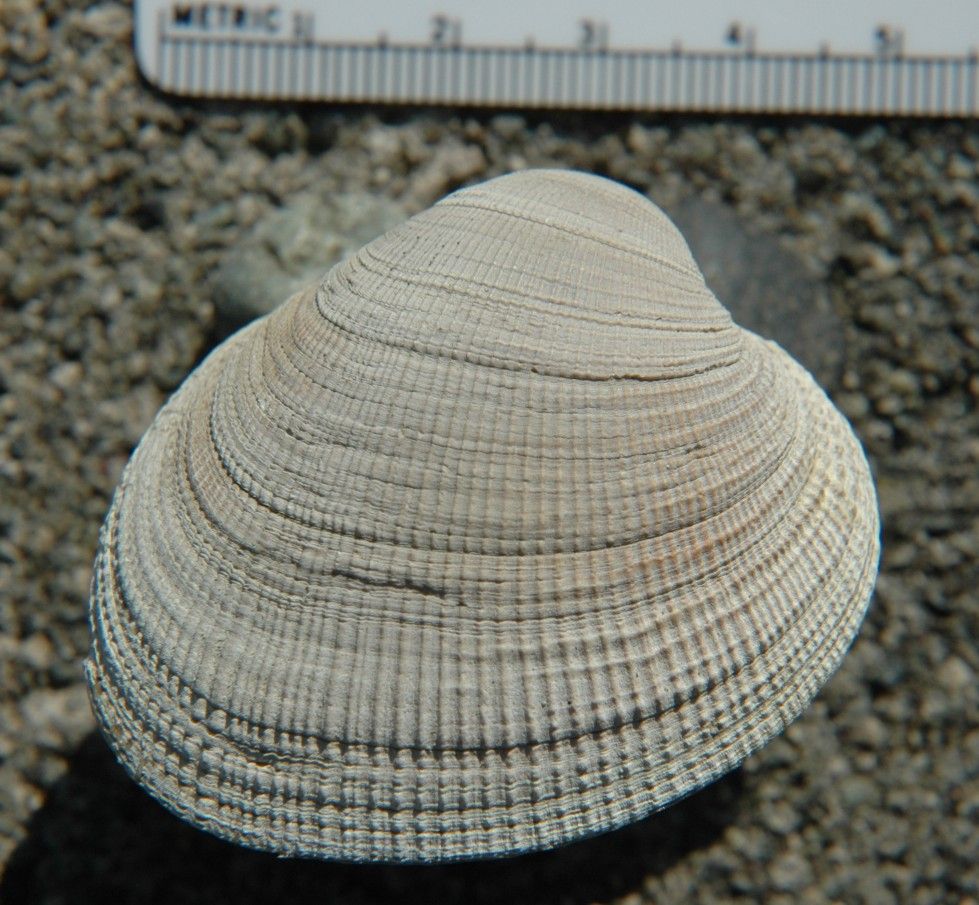 Leukoma staminea is commonly known as the Pacific Littleneck clam. It is native to the Northeast Pacific from Baja California, Mexico to the Aleutian Islands, Alaska. In 1885, L. staminea was introduced to the East Coast of North America. The clams were brought from Oregon and Washington and planted near Woods Hole, Massachusetts, but they did not survive and were never found in the surrounding area. In its native range, this species is a popular edible clam which is commercially fished in some areas.

*Beyond its native range, this species is not currently established in North America.

Leukoma staminea is native to the Northeast Pacific from Baja California to the Aleutian Islands (Abbott 1974). It is a popular edible clam in its native range. A ‘large number’ of this clam (as Tapes staminea) were brought back to Woods Hole in 1885 by G. H. Moore, of the U.S. Fish Commission and were planted ‘in various localities’ around the Commission's Woods Hole station (Galtsoff 1962). However, none of these clams were found in subsequent years. While many attempts were made in the 19th century to introduce Eastern Oysters (Crassostrea virginica), American Lobsters (Homarus americanus), and Blue Crabs (Callinectes sapidus) to the West Coast, this is the only deliberate attempt, that we know of, to introduce a West Coast invertebrate to the East Coast.

In 1885, G. H. Moore of the US Fish Commission, supervised the transport of a carload of American Shad (Alosa sapidissima) from the East Coast to Oregon and Washington, and in return brought a large quantity of Pacific Littleneck Clams. Many of the clams perished, but those that appeared to be in good condition (several hundred) were planted near the Woods Hole station. Galtsoff (1962) noted that 'Leukoma staminea (as Tapes staminea) apparently did not survive and was never found in Woods Hole waters.'

Leukoma staminea is still widely known under its previous genus Protothaca. It is a roughly oval clam, with its beak nearer to the anterior end. The shell is sculptured with concentric lines and stronger radial ribs, forming beads as they cross. The radial ribs are better-defined in the middle of the shell. The beaks are almost smooth. The ligament is sunken, and not elevated above the dorsal margin. The interior of the ventral margin is slightly crenulated. The siphons are united for their entire length. Adults range from 35-80 mm in length. The color ranges from yellowish or gray in muddy environments to white with geometric blotches or lines on the open coast (Abbott 1974; Shaw 1986: Coan et al. 2000; Coan and Valentich-Scott, in Carlton 2007).

Leukoma staminea is a common clam in shallow bays and estuaries. Adults reach 30-60 mm in length. The sexes are separate and spawning occurs from May-September in Alaska, and December-June in Mugu Lagoon, California (Glude 1978; Peterson 1982, both cited by Shaw 1986). Sperm and eggs are released into the water. Fertilized eggs develop into trochophore larvae within 12 hours, and veligers by 24 hours. Larvae settle at about 300 μm, after about three weeks in the plankton. The clams mature in 2-3 years at 22-35 mm, in British Columbia (Quayle 1943, cited by Shaw 1986). Estimated longevity is 7-13 years (Shaw 1986).

Pacific Littlenecks tolerate temperatures from near 0 to 25°C, and salinities as low as 20 PSU. They grow best in coarse sand or gravel, and can be smothered by fine sand or silt. Predators include crabs, starfishes, predatory snails, octopuses, sea otters, and humans (Shaw 1986).

Leukoma staminea supports commercial fisheries in the northern part of its range and sport fishery in California. An unsuccessful attempt was made to introduce it to the Atlantic at Woods Hole, Massachusetts in 1885 (Galtsoff 1962). This introduction was considered to be a possible vector for the introduction of the Pacific hydroid and medusa Gonionemus vertens to the Woods Hole area: ‘the sand-gravel habitat would be unfavorable for the hydroid, but they were packed in eelgrass or seaweed, G. vertens might have been transported by these shipments’ (Edwards 1976).

Edwards, C. (1976) A study in erratic distribution: the occurrence of the medusa Gonionemus in relation to the distribution of oysters, Advances in Marine Biology 14: 251-284