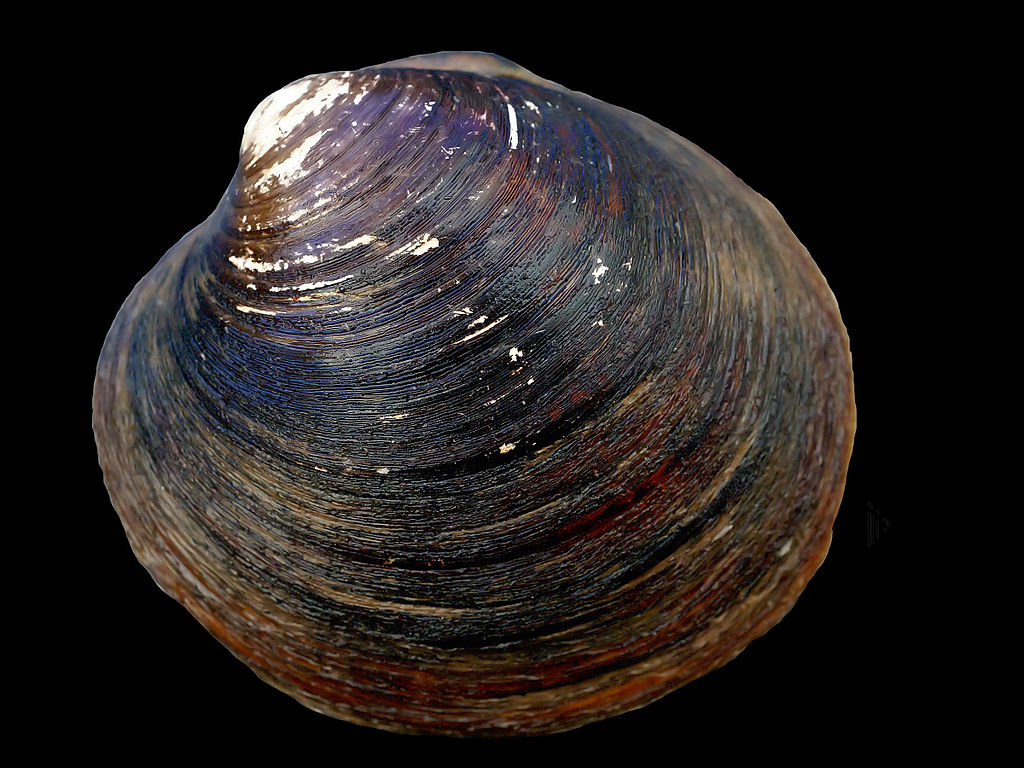 Arctica islandica, commonly known as the Ocean Quahog, is a large clam with an almost circular shell. The shell is covered with a brown-to-black periostracum, which is often brittle and peeling. It is native to cold waters of the North Atlantic, spanning from North Carolina to Labrador, Iceland, the White Sea, Russia and Spain. Living animals have not been found outside its native range, but shells have been found on shores in California and Oregon. It inhabits muddy to sandy bottoms from the shallow subtidal to 150 m.

*Beyond its native range, this species is not currently established in North American waters.

Arctica islandica is a large clam, native to cold waters of the North Atlantic. It spans from North Carolina to Labrador, Iceland, the White Sea, Russia and Spain. In the southern part of its range, it is confined to deep water, but north of Cape Cod, shells are commonly found washed up on beaches (Abbott 1974; Gosner 1978; Hayward and Ryland 1990; Marlin 2011). Living animals have not been found outside its native range, but shells have been found on shores in California and Oregon (Coan 1998; Chapman and Miller 1999). This bivalve is heavily fished in the North Atlantic, and is widely sold alive on the West Coast (Chapman et al. 2003), so releases as discarded seafood or unused bait are possible.

In 1997, a pair of valves of A. islandica was found on a beach near Cape Kiwanda, Oregon (Coan 1998), 'perhaps the remnants of a picnic'. In 1998, the remains of seven valves were found in gravel in the northeast corner of Humboldt Bay, California (Chapman and Miller 1999). In both cases, there is no evidence that live clams were introduced to the ocean or bay, but that possibility cannot be excluded.

Arctica islandica (common names: Ocean Quahog; Black Clam; Mahogany Clam) is a large clam with an almost circular shell. The shell is covered with a brown-to-black periostracum, often brittle and peeling. The shell is strong, but rather chalky. The interior of the shell lacks a pallial sinus. The anterior hinge line is strongly curved. The right valve has three prominent cardinal teeth (immediately below the umbo) and a singular posterior lateral tooth. The left valve also has three cardinals and one posterior lateral. The interior of the shell is smooth, glossy, and white, lacking the purple stain of Mercenaria mercenaria (Quahog, Hard Clam). This clam reaches 100-120 mm in length, and is characteristic of cold, often deep waters and muddy to sandy bottoms (0-482 m). (Description from: Abbott 1974; Gosner 1978; Hayward and Ryland 1990; Marlin 2011)

Arctica islandica is a large bivalve which inhabits muddy to sandy bottoms, occurring in cold waters, ranging from subtidal waters to 150 m (Abbott 1974; Gosner 1978; Hayward and Ryland 1990). It is a suspension-feeder, with planktonic larvae. The optimal temperature range is 6-16 C. It can be expected to be restricted to marine salinities. Adults mature at 12.5 to 15 years and can live for 225 years (Food and Agriculture Organization 2012a).

Live specimens of Arctica islandica have not been found outside its native range. However, this clam is heavily fished in the Atlantic Ocean, and shipped live around the world (Chapman et al. 2003; FAO 2012). Shells have been found on the West Coast of the US (Coan 1998; Chapman and Miller 1999), and introductions of live animals are possible.