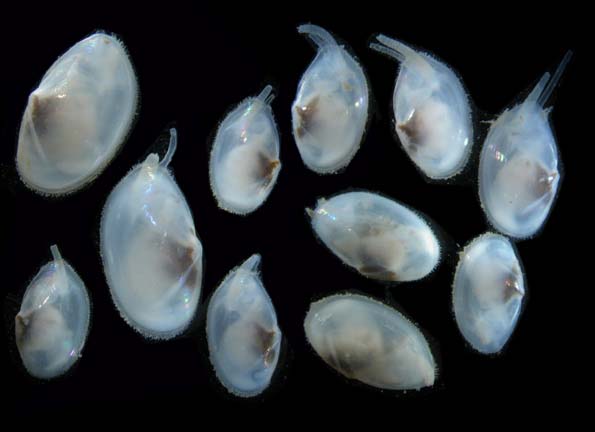 Theora lubrica is commonly known as the Asian Semele. It is a small infaunal bivalve native to the Northwest Pacific, from southern Russia and northern Japan to the Hong Kong region. It has been introduced to California, Australia, New Zealand, the Mediterranean Sea, and the Atlantic coast of Spain. It typically occurs in soft, muddy subtidal or lower intertidal sediments, rich in organic matter. It is considered a pollution-indicator species, because of its frequent dominance in highly polluted sediments. No ecological or economic impacts have been reported for this species.

Theora lubrica is a small infaunal bivalve native to the Northwest Pacific, from northern Japan and the Vladivostok area, Russia, south to the Hong Kong region (Huang 2001; Lutaenko et al. 2006; Academy of Natural Sciences of Philadelphia 2006-2013). It has been introduced to Southern California and San Francisco Bay (Seapy 1974; Cohen and Carlton 1995), southern Australia (Boyd 1999), New Zealand (Cranfield et al. 1998), the Mediterranean Sea (Bogi and Galil 2007), and the Bay of Biscay coast of Spain (Adarraga and Martinez 2011). Ballast water appears to be the primary vector of transport.

Theora lubrica was first discovered in Anaheim Bay, California in 1968-1969 (Hardy 1970, cited by Seapy 1974, as T. fragilis). Subsequently, it was found in Newport Harbor in 1971, Los Angeles Harbor in 1973 (Seapy 1974), and Mission Bay in 1978 (Crooks 1998). In 1998 and 2001 surveys, T. lubrica was found in many more Southern California harbors and bays (Channel Islands Harbor, Port Hueneme, Marina del Rey, Long Beach Harbor, Dana Point Harbor, and San Diego Bay) (Fairey et al. 2002; Ranasinghe et al. 2005). In the 1998 survey, T. lubrica ranked first or second in abundance among the benthic bivalves (Ranasinghe et al. 2005). In 1982, it was first collected in San Francisco Bay at Islais Creek and has been collected throughout the Bay, sometimes abundantly, as at Point Pinole and the Alameda Air Station. However, it is absent in the low-salinity parts of the estuary, such as Suisun Bay (Cohen and Carlton 1995). In 2001, it was found to be common in Tomales Bay (Fairey et al. 2002).

In the Southwest Pacific, T. lubrica was first reported in Port Phillip Bay, Australia in 1958, where it was already present in large numbers. It is present in Sydney Harbour, Botany Bay, and Georges Bay in Tasmania (Boyd 1999; Edgar et al. 1999; Australian Museum Business Services 2002). In 1970, it was found in Perth, Western Australia in the Swan Estuary (Chalmer et al. 1976, cited by Boyd 1999). Theora lubrica was discovered in New Zealand in 1971 and is found in ports on the North and South Islands. Hayward (1997) described it as living in 'billions' in Waitemata Harbour, where it was one of the few animals which tolerated the polluted sediments.

In the Mediterranean, T. lubrica was first reported from Livorno (Leghorn), Italy in 2001, where it is established (Balena et al. 2002, cited by Crocetta 2012). In 2006, this bivalve was discovered in Haifa, Israel, more than 2000 km to the east (Galil and Bogi 2007). The first record in the Atlantic occurred in 2010, when T. lubrica was found in the ports of Bilbao and Molinaro, on the Bay of Biscay in Spain. It is common here, ranking 3rd to 8th in abundance in macrobenthic samples (Adarraga and Martinez 2011).

Theora lubrica is a small bivalve with a semi-transparent, elongate elliptical shell. The shell is brittle, smooth, whitish, and has a smooth, shiny periostracum. The exterior of the shell bears fine, concentric lines. The valves are equal, with the umbos located in the mid-line of the shell. The valves gape slightly at the anterior and posterior ends. The most prominent feature of the hinge is the spoon-shaped chondropore, to which is attached an internal ligament (resilium). The external ligament is a brown, arched band. The hinge teeth are small. The right valve has two small projecting cardinal teeth and single anterior and posterior laterals, while the left valve has one cardinal tooth and single anterior and posterior laterals. The shell has a prominent internal rib, which extends obliquely across the shell, anterior to the umbo. The pallial sinus is deep, with the lower border merging with the pallial line. Theora lubrica reaches up to 16 mm length. Description from: Seapy 1974; Boyd 1999; Coan et al. 2000; Coan and Valentich-Scott, in Carlton 2007; Adarraga and Martinez 2011.

Theora lubrica is regarded as a pollution-indicator species in Japan, because of its tolerance to hypoxia and its association with organic-rich sediments, as a feeder on benthic microalgae and detritus (Tamai 1996; Saito et al. 1998; Yokoyama and Ishihi 2003). In nutrient-rich muddy habitats, it can reach very high densities (Seapy 1974; Saito et al. 1998; Johnston 2005; Ranasinghe et al. 2008). We have not found specific information on salinity tolerance, but the reported habitats appear to have salinities in the euhaline (30-40 PSU) and part of the polyhaline range (18-30 PSU) (Seapy 1974; Cohen and Carlton 1995; Boyd 1999; Saito et al. 1998; Johnston 2005).

Theora lubrica is a small, fast-growing deposit-feeding bivalve, with a high tolerance for hypoxia and organic-rich sediments. It is considered a pollution-indicator species, because of its frequent dominance in highly polluted sediments (Boyd 1999; Saito et al. 1998; Johnston 2005). However, its ecological impacts are not clear, because it is an opportunistic colonizer of highly disturbed environments, where much of the native fauna has been extirpated (Hayward 1997; Boyd 1999; Johnston 2005).