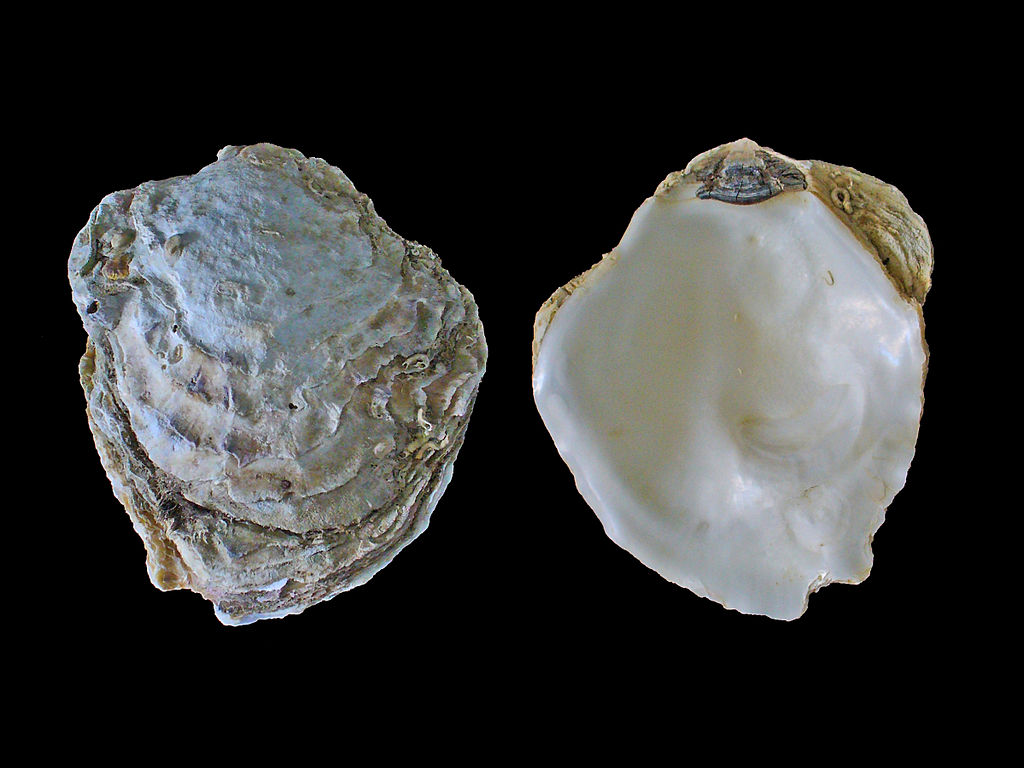 Ostrea edulis is commonly known as the European Oyster. It is native to the Northeast Atlantic from Norway to Morocco, and the Mediterranean and Black Seas. This oyster has been cultivated in European waters since before Roman times. It has been introduced and is established on the East Coast of North America, Australia and South Africa. It is highly regarded as food, but has not been cultured as widely as the Pacific Oyster (Magallana gigas), possibly because of its narrower tolerances, greater susceptibility to diseases, and lower productivity. In its native range, O. edulis is characteristic of protected coastal waters. No impacts have been reported from its introduced range.

Ostrea edulis, the European Oyster, is native to the northeast Atlantic from Norway to Morocco, and the Mediterranean and Black Seas (Carriker and Gaffney 1992). Over this range, it shows some genetic variation, with some clustering of Atlantic and Mediterranean stocks, and strong divergence of Black Sea populations (Launey et al. 2002). This oyster has been cultivated in European waters since before Roman times. It has been introduced and is established on the East Coast of North America, and is widely cultured on the West Coast (Welch 1966; Carlton 1979; Conte 1996), in Australia (Morton et al. 2003), and Japan (Iwasaki 2005). Local breeding populations are established in South Africa (Griffiths et al. 2009) and Australia (Morton et al. 2003). Individuals have been found in the wild in British Columbia (Gillespie, 2007), but it is not clear if populations are established.

The successful introduction of O. edulis to Maine led to trials in Puget Sound, Washington in 1951, and subsequent plantings as far southward as Morro Bay, California (CA) as late as 1965. These plantings were unsuccessful at establishing populations, but hatchery-based culture continues, though at much smaller scales than that of the Pacific Oyster (Crassostrea gigas) (Carlton 1979; Conte 1996). It is also cultured on a small scale in British Columbia (BC). Recruited individuals were found in 2006 in Barkley Sound, BC (Gillespie, 2007), but these may have been from larvae drifting from mariculture farms.

Ostrea edulis was introduced to East Coast waters by the US Bureau of Fisheries to provide an oyster that could support fisheries in waters too cold to support the native Eastern Oyster (Crassostrea virignica) (Loosanoff 1955). In 1949, European Oysters were planted in Milford Harbor, Connecticut (CT), in Long Island Sound (where the native oyster was abundant). Some of these oysters were then transplanted that year to three cold-water locations in Maine, including Harpswell, on Casco Bay, Boothbay Harbor, and Frenchman Bay (Loosanoff 1955; Welch 1966). Successful development of larvae was seen in Connecticut and Maine. Subsequent efforts were focused on Maine waters, with additional transplants of oysters from the Netherlands in the 1950s (Welch 1966). By 1962, successful settlement of O. edulis was seen from Casco Bay to the Damariscotta River (Welsh 1966). In the 1970s, several more transplants were made by aquaculturists and universities in Casco Bay. By 1982, populations were substantial, and considered sufficient to support limited commercial fisheries (Heinig and Tarbox 1985; Hidu and Lavoie 1991). However, populations in Maine have been subject to die-offs due to the protozoan parasite Bonamia ostreae (Elston et al. 1986; Barber and Davis 1994). Natural dispersal, fouling, ballast water, and unofficial transplants may have spread this oyster southward. By the mid-1980s, this oyster was found in Ninigret Pond, on the south coast of Rhode Island (Carlton 1992). Rare individuals have been found since 2005 in Noank, CT, in Fishers Island Sound, but no established populations are yet known west of Rhode Island (James T. Carlton, personal communication 2005). It probably spread southward in the Gulf of Maine earlier – by 2000-2007 O. edulis was present in Great Bay and the Isles of Shoals (NH-ME) (Harris and Dijkstra, 2007; MIT Sea Grant 2007), Gloucester Harbor, Salem Harbor, and Boston Harbor (Bell et al. 2005; MIT Sea Grant 2007).

Early attempts were made to introduce O. edulis from Wales to Prince Edward Island, Canada in 1957-1959, but all of these oysters died. Later attempts at hatchery rearing in Atlantic Canada used oysters from the Netherlands. A number of small populations were established in sheltered bays in New Brunswick and Nova Scotia – the largest is in Lake Lockhart, New Brunswick, on the Bay of Fundy (Hidu and Lavoie 1991; Vercaemer et al. 2003; Bataller et al. 2006). Smaller settlements occur near aquaculture operations on the Atlantic coast of Nova Scotia – one near Sambro, appears to be self-sustaining. Winter survival and summer recruitment in Atlantic Canada is probably limited by low temperatures (Vercaemer et al. 2003; Bataller et al. 2006).

Ostrea edulis is highly regarded as food, but has not been cultured as widely as the Pacific Oyster (Crassostrea gigas), possibly because of its narrower tolerances, greater susceptibility to diseases, and lower productivity (Ruesink et al. 2005). It is cultured in Japan, South Africa, Namibia, and Mauritius (Iwasaki 2006; Ruesink et al. 2005). It was introduced to South Africa for aquaculture in 1946. An early population in the Knysna estuary died out, but a small breeding population has persisted in some oyster ponds in Alexander Bay (Griffiths et al. 2009; Haupt et al. 2010). Surprisingly, Ostrea edulis was found on the southwest coast of Australia, near Albany, Western Australia, and identified by molecular means, although it was not known to be cultured in the region. This could have been an introduction by ship fouling or ballast water (Morton et al. 2003).

Ostrea edulis has a roughly circular, or broadly oval, shell, occasionally with a distinct hooked beak. The upper (right) valve bears conspicuous concentric lamellae (layers) on the outer surface. The left shell is concave and fixed to the substratum. Inside the hinge are crenulations (known as chomata) that vary from strong and easily seen with the naked eye, to subtle inconspicuous bumps, to being absent, the latter situation resulting from overgrowth of the chomata by additional shell layers in older specimens. The shell is flat, grayish-white, and has a large white muscle scar on both valves. It grows to a maximum size of 200 mm, but is rarely larger than 110 mm (Abbott 1974; Coan et al. 2000; Coan and Valentich-Scott, in Carlton 2007; Food and Agriculture Organization 2011). Larvae settle at a size of 280-300 µm (Food and Agriculture Organization 2011).

Ostrea edulis, like other oysters, is a protandric hermaphrodite, maturing first as a male and then becoming female in subsequent seasons. Males release sperm into the water column, while females brood eggs in their gills, where fertilization occurs. Larvae are brooded and released as shelled veligers. Each veliger feeds on phytoplankton, and grows, eventually developing a foot and becoming a pediveliger, competent for settlement. In laboratory culture, larval settlement occurred at about 8-26 days at 17.5 to 27.5?C (Davis and Calabrese 1969). Adult C. gigas feed on phytoplankton of 6-32 um with ~100% retention efficiency, but are less efficient with smaller organisms (Nielsen et al. 2016). Adult oysters are reported to grow to 200 mm, although 110 mm in length is a more typical maximum (Carriker and Gaffney 1996; Abbott 1974; Coan and Valentich-Scott, in Carlton 2007; Food and Agriculture Organization 2011).

Ostrea edulis is characteristic of protected coastal waters in Europe. This oyster normally grows at salinities of 22-35 PSU (Black Sea populations live at ~ 18 PSU), and can tolerate brief exposures to salinities as low as 15 PSU (Davis and Ansell 1962). It tolerates a very wide temperature range, from below 5 to 30?C, although temperatures over 25?C are stressful (Newell et al. 1977).

Ostrea edulis, the European Flat Oyster, has been cultured in some locations, and has become introduced and established in a few locations around the world (Ruesink et al. 2005), but has become abundant enough to support a wild fishery only in Maine (Heinig and Tarbox 1985; Hidu and Lavoie 1991). Impacts on native species have not been reported.

Fisheries- Ostrea edulis, the European Flat Oyster (often called Belon, after a French town known for the quality of its oysters), is highly regarded for flavor, but is slower-growing and more prone to disease than the Pacific Oyster (Crassostrea gigas) (Conte 1996; Ruesink et al. 2005; Morse 2011). It tends to be cultured on much smaller scales than C. gigas or Blue Mussels (Mytilus edulis or M. galloprovincialis). In Maine, they are regarded as difficult to raise, because of periodic die-offs due to the parasite Bonamia ostreae, the erratic release of their brooded larvae, and problems from fouling organisms. Ongoing research is being done to improve culture methods (Morse 2011).

Parasite/Predator Vector- Ostrea edulis is subject to many diseases, of which Bonamia ostreae is probably the most serious. The geographic origin and original host(s) of Bonamia is/are unknown. Although it was first described from Brittany, France (Pichot et al. 1979), infections of O. edulis in Europe, Washington, Maine, and California appear to have originated in a hatchery (closed sometime before 1966) in Elkhorn Slough, California (Elston et al. 1986; Friedman et al. 1989). The Olympic Oyster (O. lurida), native to the West Coast, was once suspected as the original host. However, O. lurida could not be infected with B. ostreae in experiments (Arzul et al. 2005, Fisheries and Oceans Canada 2007 http://www.pac.dfo-mpo.gc.ca/sci/shelldis/pages/bonostoy_e.htm). This parasite is primarily a threat to populations of O. edulis, including populations in Europe, which were being restored using stock from West Coast hatcheries (Pichot et al. 1979; Englesma et al. 2007); introduced populations in Maine (Elston et al. 1986); and cultured populations in California, Maine, and British Columbia (Friedmam et al. 1989; Marty et al. 2006; Morse 2011). Several other species of oysters, including Crassostrea ariakensis are prone to infestations of Bonamia, but these appear to be due to species other than B. ostreae (Burreson et al. 2004). Transmission of Bonamia ostreae and other parasites is an important consideration in aquaculture or restoration activities involving O. edulis.