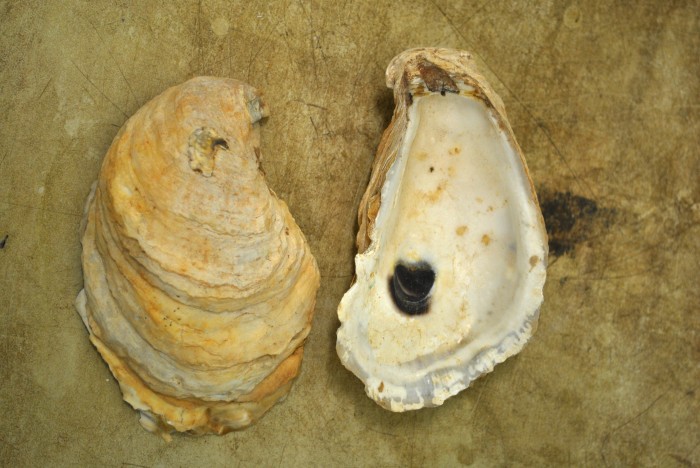 Crassostrea virginica is commonly known as the Eastern Oyster. It is native to the Northwest Atlantic from the Gulf of St. Lawrence to Panama and Venezuela. Beginning in the 19th century, extensive transplants were made to the West Coast (from British Columbia to southern California), Hawaii, and European waters. The Eastern Oyster is currently established in Hawaii, and a tiny remnant population survives in British Columbia, but the vast majority of these introductions were unsuccessful. In its native habitat this species is characteristic of shallow, estuarine waters and can occur in the intertidal. Direct impacts from introduced Eastern Oysters have not been reported, but oyster transplants can transfer additional unintended organisms which can have impacts in their non-native range. These include the Atlantic Oyster Drill (Urosalpinx cinerea), the Atlantic Slipper Shell (Crepidula fornicata), and infaunal polychaetes (Streblospio benedicti and Clymenella torquata).

Crassostrea virginica is native to the northwest Atlantic from the Gulf of St. Lawrence to Panama and Venezuela (Bousfield 1960; Abbot 1974: Morris 1975). It is characteristic of shallow, estuarine habitats, and in the southern part of its range, occurs in the intertidal. Beginning in the 19th century, extensive transplants were made to West Coast waters, from British Columbia to southern California, to Hawaii, and to European waters. The Eastern Oyster is established in Hawaii, and a tiny remnant survives in British Columbia, but the vast majority of these introductions were unsuccessful (Carlton 1979; Carlton and Mann 1996; Ruesink et al. 2005; Carlton and Eldredge 2009). Some hatchery-based aquaculture of C. gigas continues on the West Coast and elsewhere (Conte 1996; Rueness et al. 2005).

The California Gold Rush and rapid population growth around San Francisco Bay and elsewhere on the West Coast created a demand for oysters, and led to rapid overfishing of the native Olympia Oyster (Ostrea lurida). With the coming of the transcontinental railroad, it was possible to ship live Eastern Oysters across the US for consumption and for planting. The first planting was made in San Francisco Bay in 1869. Oysters were shipped to San Francisco Bay from New York (Long Island Sound) and New Jersey in varying quantities, increasing to a peak of 1 million pounds per year by 1900, and then decreasing. Most were shipped to market, but many were placed in the Bay first for 'freshening' and holding. Sometime between 1900 and 1915, growth rates and the quality of oysters raised in San Francisco Bay began to decrease, and production in California shifted to other bays. Oyster culture began in Tomales Bay in 1875, Humboldt Bay in 1896, and Elkhorn Slough in 1923 (Barrett 1963; Carlton 1979). In the late 19th century, oyster plantings occurred in many West Coast bays, including: Yaquina Bay, Oregon in 1872; Willapa Bay, Washington (WA) in 1874; Grays Harbor, WA in 1900; Puget Sound, WA in the 1870s and 1880s; and the Strait of Georgia, British Columbia in 1883 (Carlton 1979). In California, there were some renewed efforts at planting C. virginica in the 1930s, by the California Department of Fish and Game, including Anaheim Bay, Mugu Lagoon, and Morro Bay, but these were not sustained, and did not result in reproduction (Barrett 1963; Carlton 1979).

Crassostrea virginica is established in Pearl Harbor, Oahu. Small plantings of C. virginica were made in 1866, although the currently established population may have resulted from a more extensive stocking (38,000 oysters) in 1895. The population has fluctuated due to pollution and disease, but reefs and settled oysters are still abundant (Coles et al. 1999; Carlton and Eldredge 2009). Smaller stockings in Kaneohe Bay, Oahu (1921-1926) did not result in breeding populations (Carlton and Eldredge 2009).

Crassostrea virginica is white to lead-gray in color, and its shell shows concentric layers of growth. The shell is rough and heavy, and generally narrow near the hinge (umbo) and widening away from the hinge, but this can vary according to conditions of growth. The lower (right) valve is somewhat cupped. The upper (left) valve is smaller and fatter, and advances forward as the shell grows. The interior of the shell is dull white, but the muscle scar is deep violet. Adult oysters are 150-250 mm in size. Description from: Quayle 1969; Morris 1975; Gosner 1978; Coan et al. 2000; Coan and Valentich-Scott, in Carlton 2007.

Larvae are described and illustrated by Chanley and Andrews (1971). Early veligers are nearly circular, but late larvae of this and other oysters are distinguished by the asymmetrical umbo. They settle at a length of about 300 µm (Chanley and Andrews 1971).

Crassostrea virginica, like other oysters, is a protandric hermaphrodite, maturing first as a male and then becoming female in subsequent seasons. Females release eggs, and males release sperm, into the water column, where fertilization occurs. The fertilized egg develops first into a ciliated trochophore larva, and then into a shelled veliger larva. The larva feeds on phytoplankton, and grows, eventually developing a foot and becoming a pediveliger, competent for settlement. In laboratory culture, larval settlement occurred at about 11-30 days at 19 to 33⁰C (Shumway 1996). Adult oysters grow up to 250 mm (Abbott 1974; Morris 1975).

Crassostrea virginica is characteristic of estuarine waters in eastern North America. This oyster grows at salinities of 5-42 PSU, and can tolerate brief exposures to salinities as low as 2 PSU (Shumway 1996). In Chesapeake Bay, extensive intertidal beds are common. Successful reproduction occurs at 19-36⁰C, and 12.5 to 35 PSU (Shumway 1996). It tolerates a wide variety of water temperatures, from -1.8 to 36⁰C, while air temperatures up to 42⁰C can be tolerated during low tide exposures (Shumway 1996).

Successful invasions of Crassostrea virginica have been rare and limited (Pearl Harbor, Hawaii; Nicomekl River, British Columbia), and impacts have not been reported from the oysters themselves. However, oysters and their reefs constitute a major marine habitat, and oyster transfers have constituted one of the major vectors of introductions in the marine environment (Galtsoff 1932; Carlton 1979; Cohen and Carlton 1995; Eno et al. 1997; Reise et al. 1999; Wolff and Reise 2002).

Predator-Parasite Vectors- Eastern Oyster transplants have transferred many organisms from the East Coast of North America to the West Coast, and to the coasts of northern Europe. It is striking that many East Coast natives have become established in both regions. The Atlantic Oyster Drill (Urosalpinx cinerea) an important oyster predator, the Common Atlantic Slipper Shell (Crepidula fornicata) a fouling gastropod, and the infaunal polychaetes Streblospio benedicti and Clymenella torquata are all introduced both on the West Coast and in Europe, and now create problems for the culture of introduced Pacific Oysters (C. gigas), as well as affecting native species (Quayle 1969; Carlton 1979; Cohen and Carlton 1995; Eno et al. 1997; Reise et al. 1999; Wolff and Reise 2002).

The introduction of C. virginica introduced the parasite Perkinsus marinus, the causative agent of 'Dermo' disease to Hawaii. However, this parasite has not been reported to affect native fauna (Kern et al. 1973; Carlton and Eldredge 2009). Transfers of Eastern Oysters within their native range, from Chesapeake Bay and more southern regions to northern estuaries have extended the range of P. marinus northward along the coast to Maine (Ford 1996; Reece et al. 2001). Another inadvertent transfer, within the native range occurred, when Haplosporidium nelsoni (MSX parasite), caused massive mortalities of Eastern Oysters in Chesapeake Bay. Subsequent oyster transfers from the Gulf of Mexico are believed to have introduced the parasitic barnacle Loxothylacus panopei, which infects mud crabs (Eurypanopeus depressus; Rhithropanopeus harrisii), to Chesapeake Bay (Van Engel et al. 1966; Hines et al. 1997).

Wolff, Wim J. (1999) Exotic invaders of the meso-oligohaline zone of estuaries in the Netherlands: why are there so many?, Helgoländer Meeresuntersuchungen 52: 393-400