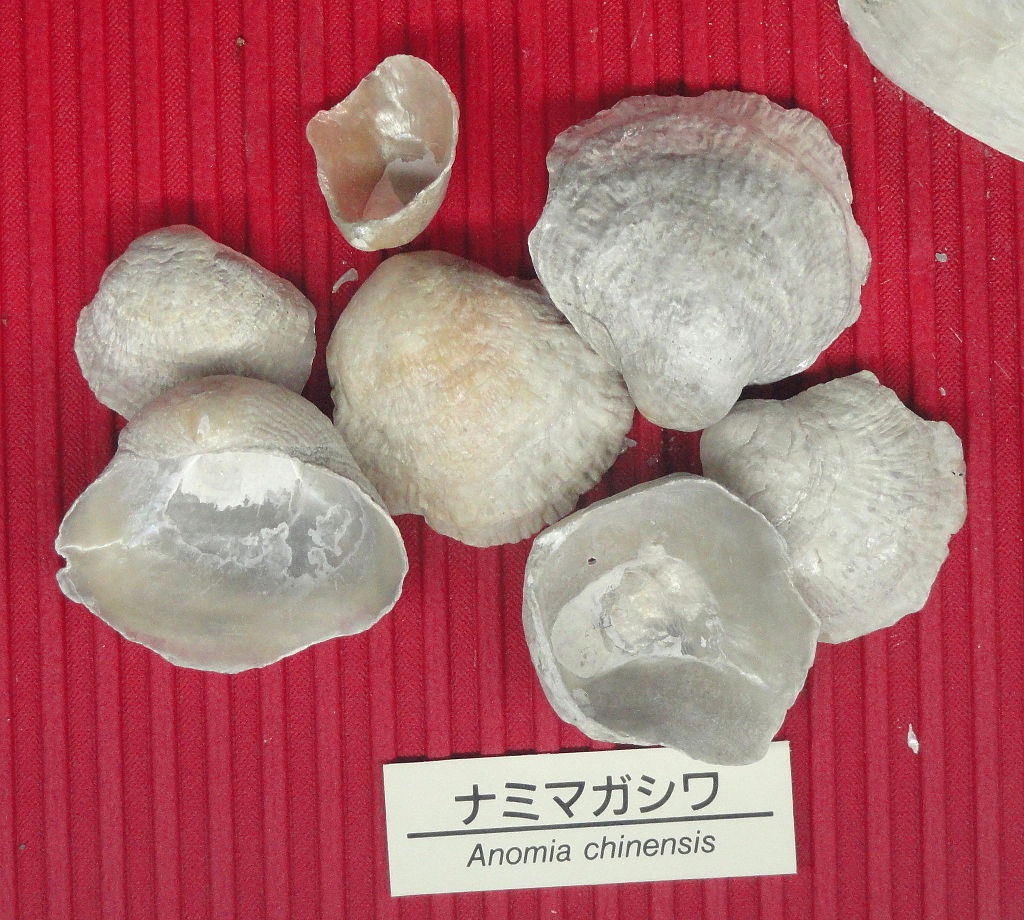 Anomia chinensis, commonly known as the Chinese Jingle Shell, is native to the Northwestern Pacific from Singapore to Korea and Japan. In the Northeast Pacific, it was first found in Samish Bay, Washington (WA) in 1924, and was subsequently found in Willapa Bay, WA and Tillamook Bay, Oregon. However, this species has failed to become established on the West Coast. Adults of A. chinensis are firmly attached to hard substrates, such as rocks, shells, wood, and man-made structures. There are no known impacts from introduced locations.

Anomia chinensis (Chinese Jingle Shell) is native to the Northwestern Pacific from Singapore to Korea and Japan (Tan and Woo 2010; Academy of Natural Sciences of Philadelphia 2011; Museum of Comparative Zoology 2011).

In the Northeast Pacific, A. chinensis was first found in Samish Bay, Skagit County (Puget Sound), Washington, in 1924, in areas where Pacific Oysters (Crasostrea gigas) had been planted (Hanna 1966; Carlton 1979). This shell was also found in Willapa Bay, Washington (Burch 1952, cited by Carlton 1979); and Tillamook Bay, Oregon (Carlton 1979). Carlton (1979) considered that the records were too few to determine whether this bivalve was established or not. However, the absence of any further records leads us to conclude that this species has failed to become established on the West coast.

Anomiidae (Jingle Shells) are marine bivalves with thin, translucent shells. The lower (right) valve is flat and permanently attached to a hard substrate by a stalk-like byssus, which passes through a hole in the shell near the hinge (Morris 1975; Gosner 1978, Yamaguchi 1998). The upper (left) valve is dome-like. Specimens of A. chinensis vary from nearly circular to rather irregular, and 25-45 mm in diameter. Upper valves (in web photographs) tend to be yellow or gold, while lower valves are white. This bivalve commonly attaches to rocks, shells, wood, or man-made structures. Young shells are mobile for a time, but then the byssus becomes calcified and the bivalve is cemented in place (Yamaguchi 1998).

Anomia cytaeum
Some sources consider A. chinensis and A. cytaeum to be synonymous (Tan and Woo 2010).

Adults of Anomia chinensis are firmly attached to hard substrates, such as rocks, shells, wood, and manmade structures (Yamaguchi 1998). These bivalves are suspension feeders and their larvae are planktotrophic. After settlement, postlarvae are mobile for a time, and then attach to a surface by a calcified byssus. Up to a size of 10 mm, they can detach from a surface, and reattach. As they develop further, their ability to change their position or orientation decreases (Yamaguchi 1998).

Anomia chinensis has been introduced to several locations in the US and France with Pacific Oysters (Crasostrea gigas) from Japan, but has not become established. No impacts are known from introduced locations.