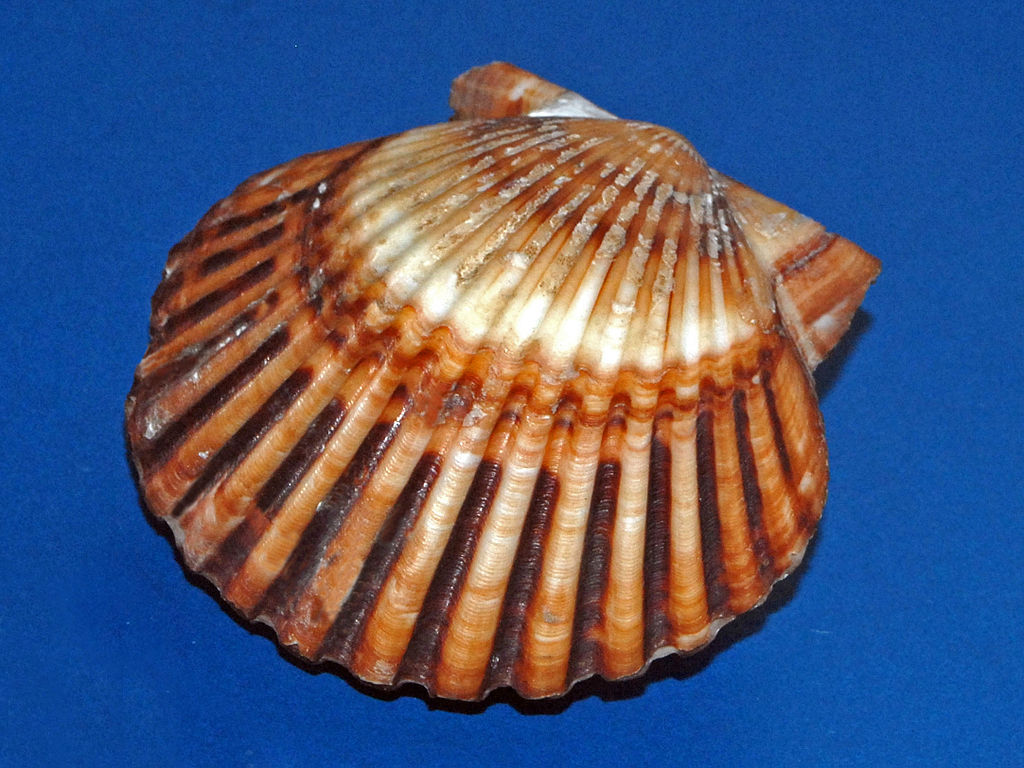 Argopecten irradians is commonly known as the Bay Scallop. It is a highly prized food item, because of the delicious taste and firm texture of its adductor muscle meat. It is native to the Northwest Atlantic from southern Massachusetts Bay to the Gulf of Mexico and is found in shallow coastal waters. Fisheries have been created in Eastern Canada and China, but wild populations are not known from either location. Non-native specimens were found at Sable Island, Nova Scotia, but this species cannot survive the local winter temperatures. On the West coast, dead shells were found in California and Oregon, but live specimens have not been reported.

*Beyond its native range, this species is not currently established in North American waters.

Argopecten irradians is native to the Northwest Atlantic from southern Massachusetts Bay to the Gulf of Mexico in shallow coastal waters. Specimens are known from Sable Island, Nova Scotia (Academy of Natural Sciences of Philadelphia 2011), but this bivalve is not established there (Abbott 1974; Morris 1975; Gosner 1978).

Argopecten irradians is known from the West Coast only from 'old and broken valves' found in South San Francisco Bay in 1963 and 1973 (Wicksten 1976, cited by Carlton 1979), and from a museum specimen from Newport Beach, Oregon in 1923 (Academy of Natural Sciences of Philadelphia 2011). Live animals or dead shells of this bivalve were probably introduced with oysters planted in San Francisco Bay and Oregon waters, from Long Island Sound, in the late 1800s - early 1900s (Carlton 1979; Miller 2000). Alternatively, especially for the Oregon specimen, discarded shells or whole scallops from seafood restaurants are a possibility. There is no evidence that a breeding population existed in San Francisco Bay or Oregon.

In 1979 and 1989, batches of A. irradians were transported to hatcheries in Nova Scotia, for the development of a 'put and take' scallop fishery. Bay scallops do not survive the winter, but are kept, bred, and reared in hatcheries, then released in Prince Edward Island waters for 'grow-out' in the spring and harvesting in the fall (Whyte et al. 1993; Minchin 2003). In 2007, young Bay Scallops were found settling in Pomquet Harbor, Nova Scotia. Marked scallops survived the winter, and by 2013, a population was apparently established (Williams et al. 2015).

Argopecten irradians has been introduced to aquaculture facilities in China (Minchin 2003; Zheng et al. 2004). We do not know if it has been released or is established in natural waters.

Argopecten irradians, the Bay Scallop, is round with nearly symmetrical 'wings' on each side of the beak, prominent ribs radiating from the triangular beak, and scalloped edges. The lower valve (left) and upper valve (right) are equally convex. Color patterns of the shells are variable, often with bands of light and dark along the growth lines, and varying among grey, brown, and white. Adult shells typically range from 50 to 75 mm. The adult live animal is marked by the many blue eyes visible when the shell is open and by the rapid, jerky swimming caused by opening and closing its shell. (Description from: Abbott 1974; Morris 1975; Gosner 1978)

Juvenile Argopecten irradians use byssus threads to attach to substrates such as gravel and eelgrass, but move freely as adults, swimming when disturbed. They range through estuarine habitats, but depend on eelgrass for shelter from predators (Gosner 1978; Minchin 2003). These scallops are hermaphroditic, but the eggs are fertilized externally (Zheng et al. 2004). The veliger larvae are planktotrophic.

Argopecten irradians is a highly prized food item, because of the delicious taste and firm texture of its adductor muscle meat. Fisheries on the East Coast are limited, and declining, because of poor water quality, and the loss of eelgrass (Zostera marina) beds in many estuaries. The high status and price of this scallop has led to introductions for aquaculture in China, and a hatchery-dependent 'put and take' fishery in Atlantic Canada (Minchin 2003). No impacts have been reported for this species in its introduced range.