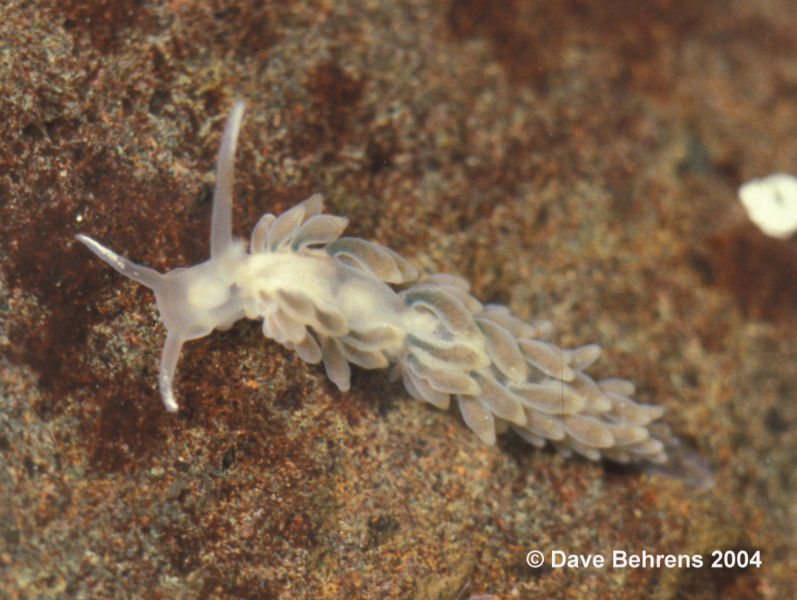 Catriona rickettsi is a nudibranch commonly known as Rickett’s Aeolis. It was first described from San Francisco Bay, California in 1974, but its origin is unknown. It is considered introduced to the West Coast of North America because of its relatively recent discovery and its association with an introduced hydroid. There are scattered reports of this species from Northern Mexico to Oregon. It is found in tidepools, rocky shores, and harbors from warm-temperate to cold-temperate regions. There are no known impacts of this species in North America.

Catriona rickettsi, described from San Francisco Bay, is considered introduced to the West Coast, but is of unknown origin (Cohen and Carlton 1995). It has been collected from Oregon to Mexico, but has not been reported from other parts of the world. However, its relatively recent discovery (1974) in San Francisco Bay, and its association with and feeding on the introduced hydroid Ectopleura (= Tubularia) crocea (Behrens 1984; Cohen and Carlton 1995) are indicative of introduced status. Ectopleura crocea is native to the Western Atlantic, but C. rickettsi is not known from that region, so its original food source is likely a different, but related hydroid.

Catriona rickettsi was described from specimens collected in Pete's Harbor, Redwood City, in South San Francisco Bay, California in 1974 (Behrens 1984). It was also found in the central part of San Francisco Bay at Hunters Point, Treasure Island, and South Hampton Shoal in 2000 (Ruiz et al., unpublished data). It has been found at several spotty locations on the West Coast, including tidepools in La Jolla, CA in 1980; a jetty at the mouth of the Umpqua River in Reedsport, Oregon in 1994; and Punta Eugenia, Baja California, Mexico (Cohen and Carlton 1995; Bertsch et al. 2000; Behrens 2004, in Miller 2014; California Academy of Sciences 2014).

Catriona rickettsi is a slender nudibranch, tapering posteriorly, with a tail forming about one fifth of its length. This animal reaches approximately 20 mm in size. The anterior portion of its foot is flared and rounded, and the whole foot is about 10X longer than it is wide. The oral tentacles are long, but the rhinophores are longer, at about 17-20% of the body length. Both pairs of appendages are smooth or slightly warty and tapering. The cerata (dorsal and lateral club-like structures) are arranged in 8-10 rows, varying with body width, with the widest row consisting of six cerata. The cerata vary somewhat in shape, from spindle to club-shaped, and when fully extended, are about as long as the rhinophores. The penis lacks a stylet or other spines. The body is translucent, and some of its organs are visible. In some larger animals, the region between the rhinophores and pericardium is yellow to orange. The distal third of the rhinophores and oral tentacles are white, as are the tips of the cerata. There is a band of orange below the white pigment on the rhinophores and oral tentacles, but the extent of this pigment is highly variable. The color of the cores of the cerata varies from yellow to orange-pink, red-brown, burgundy, or brownish green. Description from: Behrens 1984; Behrens 1991; and McDonald 2007.

Catriona rickettsi lays its eggs in a spiral of tightly folded strings, enclosed in a clear gelatinous mass, which forms a thicker tangled string. The eggs are yellowish, each contained in a capsule within the string. A typical egg mass measures 2 X 6 mm, and is attached to a substratum, usually the stalk of a hydroid (Behrens 1984).

Catriona rickettsi is a nudibranch found in open coastal regions and harbors. Nudibranchs are simultaneous hermaphrodites, and copulate reciprocally or unilaterally. Catriona rickettsi lays its eggs in a gelatinous mass, enclosing a spiral of tightly folded strings. Most Northeast Pacific nudibranchs hatch out as planktotrophic larvae, but some have lecithotrophic larvae (Barnes 1983; Behrens 1984; Goddard 2007).

Catriona rickettsi inhabits tidepools, rocky shores, and harbors of warm-temperate to cold-temperate regions. In San Francisco Bay, it occurs in 'a variety of fouling communities' (Behrens 1984). It has been found repeatedly on the introduced hydroid Ectopleura crocea (Behrens 1984; Behrens 2004, in Miller 2014), but the range of its diet is not known. In many nudibranchs which feed on cnidarians, the nematocysts (stinging cells) are ingested, and are then incorporated into the cerata, as a defensive mechanism (Barnes 1983). This is probably the case in C. rickettsi.

No impacts have been reported for Catriona rickettsi in North American waters.

Behrens, David W. (1984) Notes on the Tergipedid nudibranchs of the northeastern Pacific, with a description of a new species, Veliger 27(1): 65-71

Miller, M. C. (2004) An appraisal of the identity of the New Zealand species of the aeolid nudibranch family Tergipedidae (Gastropoda: Opisthobranchia)., Journal of Natural History 38: 1183-1192