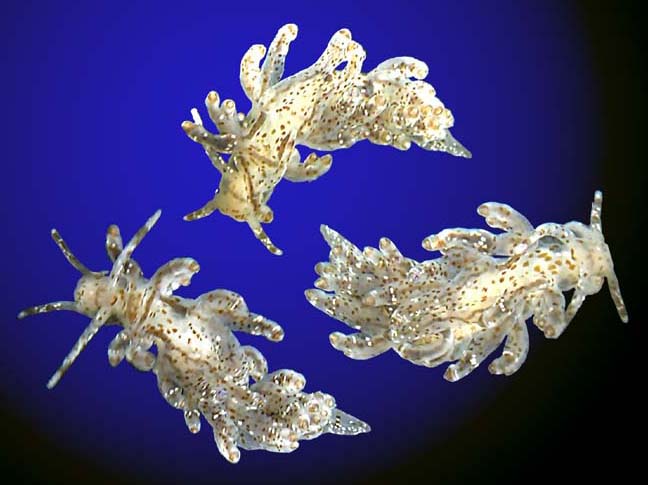 Leostyletus misakiensis is a nudibranch which is commonly known as the Misaki Balloon Aeolis. It is native to Japan and has been introduced to California where it is established in San Francisco Bay. No other locations are known from the West coast of North America. It is found in soft-sediment habitats and harbors, including piers, jetties, and floating structures. It has been found repeatedly on a cryptogenic hydroid (Obelia spp.), but the range of its diet is not known. No ecological or economic impacts have been reported from native or introduced locations.

Image Credit: George Brooks and the California Academy of Sciences.

Leostyletus misakiensis was described from Mukaishima, Honshu, Japan. It occurs on both coasts of Japan from the Seto Inland Sea to the Sea of Okhotsk (Rudman 2003; Behrens 2004). This nudibranch has been reported from Hong Kong, but the identity of these specimens is uncertain (Rudman 2001). In 1962, L. misakiensis was first collected in San Francisco Bay, and was later found to be abundant (Behrens 1971; Carlton 1979; Cohen and Carlton 1995). It has been reported from British Columbia, but those reports appear to be misidentifications (Jeffrey Goddard, in Rudman 2003).

The body of Leostyletus misakiensis is long and narrow, with a maximum width of about a twelfth to a sixth of the length. The front corners of the foot form short horns. The rhinophores are simple and prolonged, longer than the oral tentacles. The cerata are spindle-shaped and somewhat inflated, with a yellow ring below the tip. The cerata are arranged in six oblique rows, with bunches of cerata not paired symmetrically, but at an angle from the opposite bunch. Japanese specimens reached about 5 mm (Baba 1960), but San Francisco Bay animals were up to 20 mm (Behrens 1971) in size. The background color is yellowish white, marked with numerous chocolate-brown spots. The oral tentacles are marked with a brown ring, while the rhinophores have 2-3 rings of the same color. This description is based on Baba (1960) and Behrens (1971).

Leostyletus misakiensis is a nudibranch found in soft-substrate habitats and harbors. Nudibranchs are simultaneous hermaphrodites and copulate reciprocally or unilaterally. Leostyletus misakiensis lays its eggs in ribbon-shaped masses attached to hard substrates and the stalks of Obelia spp. hydroids. Most Northeast Pacific nudibranchs hatch out as planktotrophic larvae, but some have lecithotrophic larvae (Barnes 1983; Behrens 1984; Goddard 2007).

Leostyletus misakiensis inhabits warm-temperate to cold-temperate regions, on habitats including piers, jetties, and floating structures. In San Francisco Bay, it is widespread in the south and central bays in waters of polyhaline and euhaline salinities (Behrens 1971; Behrens and Tuel 1977; Ruiz et al., unpublished data). It has been found repeatedly on cryptogenic hydroids (Obelia spp.) (Behrens 1984; Behrens 2004, in Miller 2014), but the range of its diet is not known. In many nudibranchs which feed on cnidarians, the nematocysts (stinging cells) are ingested, and are then incorporated into the cerata, as a defensive mechanism (Barnes 1983). This is probably the case in Leostyletus misakiensis.

No impacts have been reported for Leostyletus misakiensis in North American waters.

Baba, Kikutaro (1960a) Two new species of the genus Eubranchus from Japan (Nudibrancida-Eolidacea), Publications of the Seto Marine Biological Laboratory 8(2): 299-302