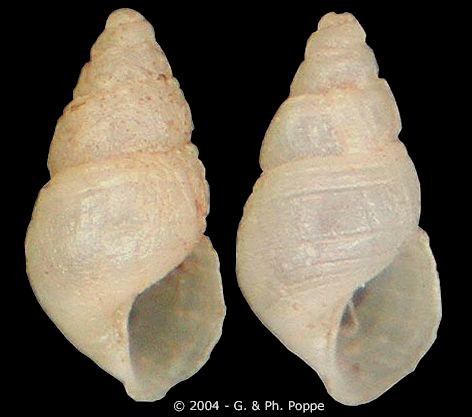 Boonea bisuturalis is commonly known as the Two-Groove Odostome. It is a small ectoparasitic gastropod which feeds on the body fluids of host invertebrates. Frequent hosts include bivalves, gastropods and other mollusks. It is native to the East Coast of North America from Prince Edward Island to Virginia and was introduced to California with imports of Eastern Oysters. It can inhabit a wide range of habitats, including rocky shores, marinas, docks, oyster reefs, and mudflats. High densities of this species can affect mollusk growth and survival, but these effects have not been quantified.

Boonea bisuturalis is a small ectoparasitic gastropod, which was described from Boston Harbor by Thomas Say (Say 1822, in Say 1858). It ranges from Prince Edward Island south to Virginia (Bousfield 1960; Abbott 1974; Morris 1975; Prezant et al. 2002; Academy of Natural Sciences of Philadelphia 2013). It has been reported from Florida, Texas, Mexico, Puerto Rico, Panama, and Brazil, but these records are considered dubious (Pimenta et al. 2009; Robertson 2012; Rosenberg 2013). Boonea bisuturalis feeds on Crassostrea virginica (Eastern Oyster), Mya arenaria (Softshell Clam), and other mollusks, both bivalves and gastropods (Robertson and Mau-Lastovicka 1979; Robertson 2012). It was introduced to San Francisco Bay with oyster transplants from the East Coast (Carlton 1979; Nichols and Thompson 1985; Cohen and Carlton 1995; McLean, in Carlton 2007). An occurrence on Lobos Reef, Veracruz, is apparently an introduction (de la Cruz and Gándara 2008; Naranjo-Garcia and Castillo-Rodriguez 2017).

The first definite record of B. bisuturalis on the West Coast was in 1962, near Menlo Park, along the South San Francisco Bay, California (CA) (Carlton 1979; ANSP 276773, Academy of Natural Sciences of Philadelphia 2013). It was found in 1977 near Fremont, CA (Carlton 1979) and in 1984 near Palo Alto, CA where it was quite common on the shells of the introduced Ilyanassa obosoleta (Eastern Mudsnail) and the native Certihidea californica (California Mudsnail) (Nichols and Thompson 1985b). All of these locations are on the South Bay, but reports of the southern California Odostomia fetella in San Pablo Bay (Filice 1959, cited by Carlton 1979) and Suisun Bay (Markman 1986, cited by Cohen and Carlton 1995) may refer to B. bisuturalis. Boonea bisuturalis is easily overlooked, so it could have been introduced with Eastern Oysters in the late 19th or early 20th century. However, it has a planktotrophic larva (Robertson 2012) and could have been introduced more recently with ballast water (Cohen and Carlton 1995).

An occurrence on Lobos Reef, Veracruz, Meixco is apparently an introduction (de la Cruz and Gándara 2008; Naranjo-Garcia and Castillo-Rodriguez 2017). This snail could represent a threat to local oyster populations. However, we have no information on its abundance and impacts in Mexican waters.

Boonea bisuturalis is a small ectoparasitic gastropod, usually found on the shells of other mollusks. The shell is elongate, conical, and dextrally coiled with 7-8 whorls. The sutures are well-defined with a deeply impressed channel below the suture. The apex of the shell is sharp. The aperture is oval, with the lower edge of the lip projecting outwards. The columella has an oblique fold inside the aperture. The color is dull white with a thin brownish periostracum and the operculum is horn-colored. Shell height is 4-6 mm. Description from: Abbott 1974; Morris 1975; Lippson and Lippson 1997; Robertson 2006.

The type locality of B. bisuturalis is Boston Harbor (Say 1822, in Say 1858) and its reported range extends from the Gulf of St. Lawrence to Panama and Brazil (Abbott 1974; Florida Museum of Natural History 2013; U.S. National Museum of Natural History 2013). However, records south of Delaware or Virginia are considered dubious (Pimenta et al. 2009; Rosenberg 2013). Robertson (2012) found that B. bisuturalis intergrades morphologically with B. impressa between Long Island Sound and Chesapeake Bay, and that records south of Chesapeake Bay are erroneous, presumably referring to B. impressa. Larval development of B. bisuturalis is planktotrophic. Eggs and a veliger shell are illustrated by Robertson (2012).

Boonea impressa
Known as the Incised Odostome, native to the East Coast from New Jersey - Mexico.  It is frequently found on Crassostrea virginica or on other bivalves, including Geukensia demissa and Ischadium recurvum.

Boonea bisuturalis is a small ectoparasitic gastropod, usually found on the shells or bodies of other mollusks, in shallow water. This snail, like other pyramidellids, is a simultaneous hermaphrodite. Animals born during June-September spawning events will produce spermatophores by October, at a size of less than 3.5 mm. The spermatophores are transferred to another animal and stored over the winter, for the summer spawning. Egg masses, of 21-276 eggs (mean = 92) are laid on the host shell, a shell of another B. bisuturalis or another surface (glass in laboratory observations) (Robertson 1978; Robertson 2012). At 17-20°C eggs took 4 days to hatch and produced planktotrophic larvae which took 16-20 days to metamorphose (Robertson 2012).

Boonea bisuturalis, like other pyramidellid snails, feeds on the body fluids of host invertebrates (Robertson 2006). Some pyramidellids are strongly host-specific, but some members of the genus Boonea (those which have been studied) are not. Some of the more frequent hosts are: Crassostrea virginica (Eastern Oyster); Mya arenaria (Softshell Clam); Littorina littorea (Common Periwinkle); Bittium alternatum (Alternate Bittium); Mytilus edulis (Blue Mussel); Ilyanassa obsoleta (Eastern Mudsnail); and Cerithidea californica (California Hornshell) (Boss and Merrill 1965; Robertson and Mau-Lastovicka 1979; McLean, in Carlton 2007; Robertson 2012). However, in experiments, starved B. bisuturalis fed on 37 species of mollusks. Feeding on non-mollscan invertebrates (e.g. the polychaetes Nereis virens and Hydroides dianthus; the tunicate Molgula manhattensis) was not seen (Robertson and Mau-Lastovicka 1979).

As indicated by the range of its hosts, B. bisuturalis can inhabit a wide range of habitats, including the rocky intertidal, oyster bars, mudflats, marinas, and docks (Abbott 1974; Robertson and Mau-Lastovicka 1979: Lippson and Lippson 1997). In San Francisco Bay, it is so far known mostly from mudflats (Nichols and Thompson 1985b; Cohen and Carlton 1995). It appears to be limited to polyhaline (18-30 PSU) and temperate waters, assuming that subtropical-tropical records are erroneous (Robertson 2012).

Few ecological or economic impacts have not been reported for Boonea bisuturalis (Two-Groove Odostome) in San Francisco Bay. However, high densities of Boonea impressa (dubbed 'oyster mosquitoes') can affect oyster growth and survival (White and Wilson 1996). Boonea bisuturalis had adverse effects on Mya arenaria (Softshell Clam) in the Gulf of St. Lawrence (Medcof 1948, cited by Robertson 2012, as 'Odostomia' trifida).

Boss, K. J.; Merrill, A. S (1965) Degree of host specificity in twospecies of Odostomia (Pyramidellidae: Gastropoda), Proceedings of the Malacological Society of London 36: 349-355