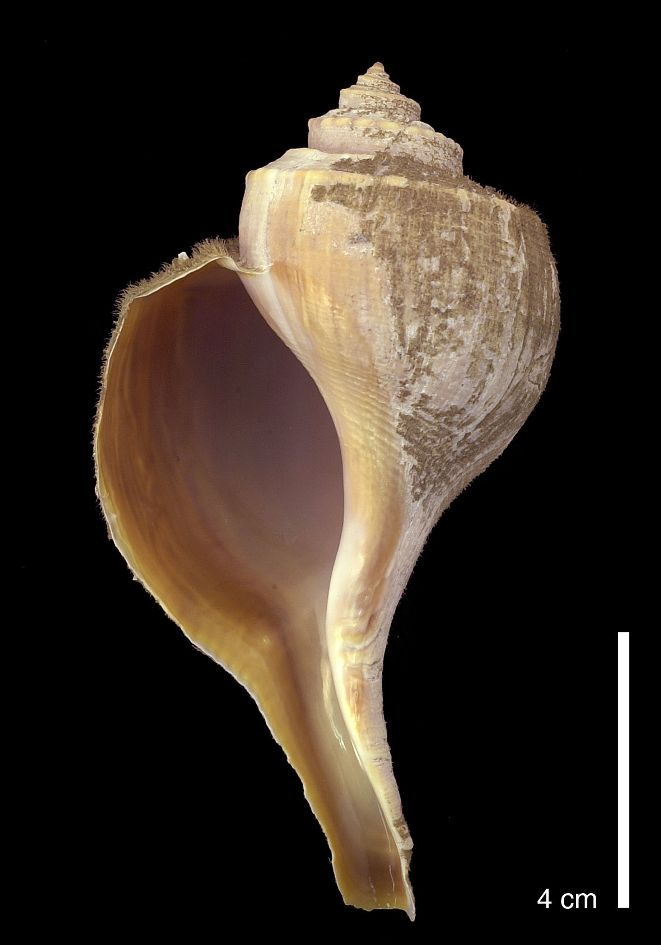 Busycotypus canaliculatus is a large predatory snail commonly known as the Channeled Whelk. It is native to the Eastern coast of North America from Cape Cod, Massachusetts to St. Augustine, Florida. It is introduced and established in San Francisco Bay, California. It occurs in a variety of habitats, including oyster beds, mud, and sand flats from the intertidal zone to depths of about 15 m. In its native habitat, it is an important fisheries species and an important predator of bivalves, but there is little information on its economic or ecological impacts in its introduced range.

Busycotypus canaliculatus is native to the Northwest Atlantic from Cape Cod, Massachusetts to St. Augustine, Florida (Abbott 1974; Morris 1975; Gosner 1978). It is introduced and established in San Francisco Bay, California (Carlton 1979; Cohen and Carlton 1995). Although this snail is frequently fished and exported from the East Coast, there are no reports of introductions outside San Francisco Bay, except for an egg string found in Bolinas Lagoon, California in the 1960s (Carlton 1979).

Busycotypus canaliculatus was first collected in San Francisco Bay, California at Berkeley in 1938, or at Alameda in 1948 - there is confusion on the date of first record, but James T. Carlton favors 1938 (Stohler 1962; Carlton 1979). It is abundant in the south and central Bay, from Belmont Slough to Candlestick Point, and from Alameda to Berkeley (Cohen and Carlton 1995). It was collected once on the Tiburon Peninsula in 1953 (Carton 1979). Adult snails have not been found outside San Francisco Bay, but one egg string was collected in the Bolinas Lagoon in the 1960s (Carlton 1979). Possible vectors include some of the smaller and later introductions of Eastern Oysters (Crassostrea virginica), aquarium releases, or with shipments from the East Coast to Italian and Asian restaurants, although this fishery was just beginning on the East Coast in the 1940s (Cohen 2012).

Busycotypus canaliculatus is a large predatory snail, with a prominent, but blunt, spire with the suture marked by a channel giving it a stepped appearance, like a pagoda. Adult shells are dextrally coiled and have 5-6 whorls, with the body whorl making up much of the shell. The aperture is large and the siphonal canal is long. The channel has a square bottom and the shoulder above the suture is marked by a strong angle and beadlike projections. The shell has fine growth lines and the periostracum is grayish to olive with a furry felt-like covering. The shell has a yellowish aperture and an oval, brown operculum. It may reach or exceed 185 mm. This is the largest snail in its introduced range, San Francisco Bay, California (Cohen 2005), and one of the largest in its native range. Its egg cases are yellowish purse-like capsules, about 25 mm in diameter, with sharp edges and laid in conspicuous strings of up to 100 cases per string, and up to nearly a meter in length. They are frequently washed up on shore. Description from: Abbott 1974; Morris 1975; Gosner 1978; Lippson and Lippson 1997; Cohen 2005; McLean, in Carlton 2007.

Busycon carica
Commonly known as the Knobbed Whelk, native to the East Coast from Massachusetts to Florida. Not introduced, but sold in Asian markets (Cohen 2012). Up to 223 mm shell length.

Busycotypus canaliculatus, the Channeled Whelk, is a large predatory marine snail. Sexes are separate and females are larger than males. Females of B. canaliculatus and the related Busycon carica mature at about 100 mm, at somewhere between 3 and 13 years of age (Magalhaes 1948; Eversole et al. 2008; Harding 2011). Fertilization is internal and development is direct. Females lay long strings of egg capsules, up to 150 capsules and a meter in length. These are usually attached to stones or other hard objects, which is buried in the substrate. Capsules contain 20-100 eggs (Lippson and Lippson 1997; Cohen 2005). In a rearing experiment, eggs hatched into shelled juveniles 3.8 mm long and fed continuously.

Busycotypus canaliculatus occurs in a variety of habitats, including oyster beds, mud and sandflats, from the intertidal zone to depths of about 15 m (Verrill and Smith 1873; Magalhaes 1948). It tolerates a wide range of temperatures and salinities, but shows signs of physiological stress at low salinities and temperatures above 22°C (Polites and Mangum 1980). Its environmental tolerances may account for its lower abundance, compared to Busycon carica and B. contrarium in the southern part of its range (Magalhaes 1948).

The Channeled Whelk detects buried bivalves by smelling the exhaled water. It feeds by using its radula to rasp and its powerful foot to pry apart the valves of bivalves. It then uses its shell to wedge apart the valves of the prey. Common prey include various species of clams, mussels, and oysters. In San Francisco Bay, native and introduced clams of the genus Macoma are likely prey (Carlton 1979). Predators of B. canaliculatus include large crabs, gulls, and humans (Lippson and Lippson 1997; Cohen 2005; Magalhaes 1948).

Busycotypus canaliculatus is an important fisheries item on the East Coast of the United States, and is frequently eaten, especially in southern European and Asian immigrant communities on the East and West Coast. On the East Coast, it is also an important predator of bivalves. However, we have no information on its fisheries importance, or its predatory impacts, in its introduced range in San Francisco Bay, California.

Habitat Change: An interesting ecological impact of B. canaliculatus's invasion is the provision of larger shells for the native Hairy Hermit Crab (Pagurus hirsutiusculus), permitting it to grow to larger sizes (Wicksten 1977).

Adams, C. B. (1839) Article XI. Observations on some species of the marine shells of Massachusetts, with descriptions of five new species, Boston Journal of Natural History 2(2): 262-288