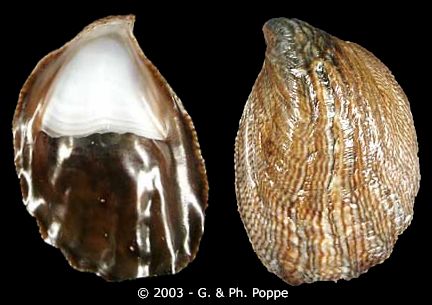 Crepidula onyx is a limpet-like marine snail commonly known as the Onyx Slippersnail. Individuals can grow in curved stacks of a few shells, but sometimes as many as 16 individuals can be stacked on top of one another. It is native to the Eastern Pacific from southern California to Peru. Introduced populations are known from Washington and Asia (Japan to Hong Kong). It is found in the intertidal and shallow subtidal growing on a variety of substrates, including rock, mud, and the shells of dead or live mollusks. In its introduced range it may be having adverse effects by growing on native mollusks, thereby interfering and competing with native species for food.

Crepidula onyx is native to the intertidal and shallow subtidal coast of the Eastern Pacific from southern California (CA) to Peru. There are museum records from further north in Monterey and Morro Bays, CA, but these may be occasional strays (California Academy of Sciences 2008; Field Museum 2008), since this species is not treated in Light and Smith's manual for central California (Carlton 2007). The northern limit of this snail appears to be around Santa Barbara, CA (Collin 2003a). The Onyx Slippershell was first collected in Japan in 1968 (Asakura 1992; Iwasaki 2006) and now ranges from Hokkaido (Iwasaki 2006) to Hong Kong (Morton 1987). Crepidula onyx has a localized introduced population on the West Coast of the US in Puget Sound, near Bremerton, Washington (Holm 2006; USGS Nonindigenous Aquatic Species Program 2008), about 1300 km north of its native range limit.

Shells of Crepidula onyx were first collected along beaches around Bremerton, Washington (WA) in Puget Sound, in 2004 or 2005 (Holm 2006; USGS Nonindigenous Aquatic Species Program 2008). It was found in the Port Washington Narrows and Sinclair Inlet, north and south of the Bremerton US Navy base, and was later (2007) found in Liberty Bay near Poulsbo, WA (USGS Nonindigenous Aquatic Species Program 2008). The range of C. onyx in Puget Sound extends over about 20 km. A shell collector's website gives its abundance as uncommon to rare (Pacific Northwest Shell Club 2013). The Puget Sound population of C. onyx was probably introduced in the ballast water or hull fouling of naval ships (Holm 2006).

In the Northwest Pacific, Crepidula onyx was first reported at Miura, Kanagwa Prefectur, near the mouth of Tokyo Bay, Japan in 1968 (Asakura 1992). This snail spread rapidly around ports of eastern Japan, China, and Korea, reaching Hong Kong by 1975 (Morton 1987), South Korea by 1982 (Choe and Park 1992), and Hakodate, on Hokkaido, Japan in 1984 (Ekawa 1985), but it was not recorded from the west coast of Japan (Sea of Japan) until 2000 (Iwasaki 2006). Genetic analyses indicated that the Hong Kong population was more similar to snail populations from San Diego, than from populations near Los Angeles (Woodruff et al. 1986). In Hong Kong Harbor, it occurs at high densities, but is scarce in waters outside the main harbor (Morton 1987; Zhao et al. 2003). It is often found attached to living mollusks, including bivalves (e.g. Perna viridis; Hong Kong, Morton 1987) or gastropods (e.g. Rapana venosa, Batillus cornutus, or Kelletia lischkei; South Korea, Choe and Park 1992; Son 2003).

Crepidula onyx is a limpet-like marine snail, with an oval, convex, and fairly thick shell. The shell can range from fairly flat to deeply arched in cross-section, depending on growth conditions. On muddy bottoms, the shells are smooth and more deeply convex. On hard substrates, the shells are flatter with a rougher surface. The shell exterior has concentric growth lines and often has shallow radiating, but meandering furrows. The apex is turned to one side, not separate from the body of the shell. The shell has an interior shelf-like deck, covering about 1/2 of the aperture, giving it a boat-like appearance. The deck is slightly concave, and its edge is sinuous and asymmetrical. The color of the shell exterior is highly variable, tan to dark brown and sometimes with radiating brown lines. The interior of the shell is brown and glossy, while the deck is white. Shells of live animals are covered by a shaggy periostracum. The shells can be up to 50 mm long when growing on muddy bottoms in tall curved stacks, but up to 60 mm on hard substrate, in the flatter-shelled mode (Coe 1938; Abbott 1974; Abbott and Haderlie 1980; Holm 2006; Paredes and Cardoso 2007).

On muddy bottoms, the animals often grow in curved stacks of four or five, but sometimes as many as 16 individuals can be stacked on one another. On hard substrates, shells are single or in stacks of two to four animals. Slippersnails are protandrous hermaphrodites, first maturing as a male. The oldest individuals, at the bottom of the stack, are female, and the youngest, at the top, are males. The middle individuals are usually in the process of changing sex. Small, supplementary males are often attached to the edges of the stacks. The snails are sedentary and are usually attached to a hard surface, such as a rock, dead shell, a live mollusk, or debris such as bottles and cans (Coe 1938).

Comparative descriptions of C. fornicata and C. onyx are rare, since these species are native to different oceans. However, they both have been introduced to Puget Sound, Washington (Holm 2006).Web photographs suggest that C. onyx is usually flatter, and often has a shell exterior marked by shallow, radiating furrows. The periostracum is shaggy in living C. onyx (Abbott and Haderlie 1980) but not in C. fornicata.

Crepidula c.f. onyx (Argentina)
Crepidula onyx has been reported from Argentina. However, analysis of DNA sequences of C. cf. onyx from Argentina indicates that it is not closely related to the Pacific species, in spite of the morphological resemblance (Collin 2003a).

Crepidula fornicata
NW Atlantic native, introduced in Puget Sound, Washington. Grows to about 50 mm in size with a narrower and more deeply arched shell. Periostracum is not obvious.

Crepidula onyx is a common eastern Pacific filter-feeding marine gastropod, with a limpet-like body. It lives attached to solid substrates, but this can often be live or empty shells of other C. onyx or hard-shelled animals (Coe 1938). Crepidula fornicata is a protandric hermaphrodite. It first matures as a male, which can occur as small as 5 mm in size. This slipper shell often forms stacks, which vary in number, based on substrate.

On soft substrates, stacks can contain up to 16 individuals, with the oldest and largest female on the bottom, young males on top, and individuals changing sex in between. There are often small, supplementary males attached to the edges of the stack. Males are somewhat mobile and copulate with females nearby, or below them on the stack, while females grow to fit the surface to which they are attached and are sedentary (Coe 1938; Henry et al. 2010). As males grow, they undergo a sex-change, but the size and timing depends on whether the male is solitary or attached to a female. The mean size of transitional individuals was 10-20 mm for solitary animals, but 25-30 mm for an attached male (Coe 1938).

On hard substrates, animals are often solitary or form stacks 2-4 animals high (Coe 1938). The transition for males from rocky intertidal sites in Panama (Collin et al. 2005) and on gastropod shells in Korea (Son 2003) happened in a 10-15 mm size range. However, in the presence of a female, males (Panama) tended to delay their sex change to over 100-400 days (solitary males typically change to females within 100 days) (Collin et al. 2005).

Crepidula onyx can grow on a variety of substrates, including intertidal rock, muddy bottoms, and shells of dead or live mollusks, including C. onyx (Coe 1938; Abbott 1974; Morton 1987). In Hong Kong Harbour, it occurred mostly on the shells of the Green Mussels (Perna viridis) while in Korea, it occurs on the shell of gastropods including Rapana venosa, Batillus cornutus, Kelletia lischkei, Neptunea arthritica and N. cumingi (Choe and Park 1992; Son et al. 2003). This snail occurrs in marine littoral environments, but it is probably subject to low salinities during rainstorms in tropical and subtropical parts of its range. Larvae of C. onyx do tolerate short (12 h) exposures to 15 PSU (Diederich et al.2011). We do not have specific data on temperature tolerances of C. onyx, but its native and introduced distribution suggest sensitivity to low temperatures. Its localized occurrence in Puget Sound may depend on warmer water in the shallow waters of the estuary.

Crepidula onyx is a filter feeder, trapping phytoplankton and detritus in strings of mucus on its gills, which are conveyed to its mouth (Henry et al. 2010). Its high densities in Hong Kong Harbour are attributed to eutrophication and high phytoplankton density (Morton 1987).

No impacts have been reported from the localized introduction of C. onyx in Puget Sound, Washington (Holm 2006). In Japan, this snail may be having adverse effects by growing on native mollusks, through interference and competition for food (National Institute for Environmental Studies 2013).

Asakura, A. (1992) Recent introductions of marine benthos into Tokyo Bay (review): Process of invasion into an urban ecosystem with discussion on the factors inducing their successful introduction, Journal of the Natural History Museum and Institute, Chiba 2(1): 1-14

Collin, Rachel (2003a) The utility of morphological characters in gastropod phylogenetics: an example from the Calyptraeidae., Biological Journal of the Linnean Society 78: 541-593