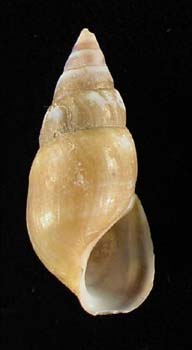 Elimia livescens is a small freshwater snail commonly known as a Liver Elimia. It is native to the Great Lakes-St. Lawrence and upper Mississippi basins, from Wisconsin and Iowa to Quebec and West Virginia. Few tidal records exist for this species, but it has been found in tributaries of the Hudson River, New York. It is known from a variety of habitats, including lakes, ponds, rivers, and on substrates ranging from mud to rock. No ecological or economic impacts have been reported for this species.

Elimia livescens is a small freshwater snail native to the Great Lakes-St. Lawrence and upper Mississippi basins, from Wisconsin and Iowa to western Quebec and West Virginia (Dazo 1965; Pyron et al. 2008). It is believed to have colonized the Mohawk and upper Hudson Rivers through the Erie Canal (Strayer 1987; Mills et al. 1997).

The first tidal record for Elimia livescens occurred in the Mohawk River, New York in 1872 (Lewis 1872, cited by Strayer 1987). In 1985, Strayer (1987) found E. livescens at sites along the Mohawk River to Albany, and as far downriver as Kingston, New York (NY) in the Hudson River. It was most abundant in the vicinity of Troy and Albany, NY (Strayer 1987). No specimens of this snail were collected in a 2008 survey (Coote and Strayer 2009), but this snail may have been missed or overlooked.

Elimia livescens is a small freshwater snail. The shell is conical to oval, and dextrally coiled with a sharp-pointed spire, but with an oval bulge around the body whorl. Adult shell shape is somewhat variable in a number of traits including, the length of the spire, whether it is tightly or loosely coiled, and varying width from wide to slender. Adult shells have 7-9 whorls. Younger shells have strong keels (carinae) on their whorls, but these may be eroded in older shells. In some populations, the tip of the spire and the early whorls may be eroded, too. The color of shells varies greatly from blue-gray to dark or light brown, black, greenish light-yellow or tan. The size of adult shells ranges from 14 to 22 mm in Michigan populations (Dazo 1965).

Elimia livescens is a small freshwater snail. Sexes are separate and lab-reared snails (at 22-23°C) mature at ~7 mm and ~18 months. Eggs are laid singly or in groups of 2-3, on hard surfaces, in spring through summer. Development is direct and eggs hatch into miniature snails in about 15 days at 22°C (Dazo 1965).

In its native Midwestern range, E. livescens is known from a variety of habitats including lakes, ponds, rivers, and on substrates ranging from mud and sand to rock, both with and without aquatic vegetation and woody debris (Dazo 1965; Pyron et al. 2008). In the Hudson basin, E. livescens was collected only in the Hudson and Mohawk Rivers (Strayer 1987). This snail is not known from brackish water and appears to be intolerant of pH levels below 7.8 (Dazo 1965). As a group, Pleurocerid snails are associated with clean, well-oxygenated water (Dazo 1965; Harman 1968). Its food consists of green algae and diatoms scraped off substrates by the radula (Dazo 1965).

No impacts have been reported from the invasion of Elimia livescens into the upper Hudson River, New York (NY). However, interactions with the native E. virginica are possible. Along the shore of Lake Ontario, NY in several streams, where E. livescens is native and E. virginica is introduced, hybrids between the two species were very abundant (Levri et al. 2012).

Krieger, Kenneth A. (1985) Snail distributions in Lake Erie: the influence of anoxia in the southern central basin nearshore zone., Ohio Journal of Science 85: 230-234

Strayer, David (1987) Ecology and zoogeography of the freshwater mollusks of the Hudson River Basin, Malacological Review 20: 1-68