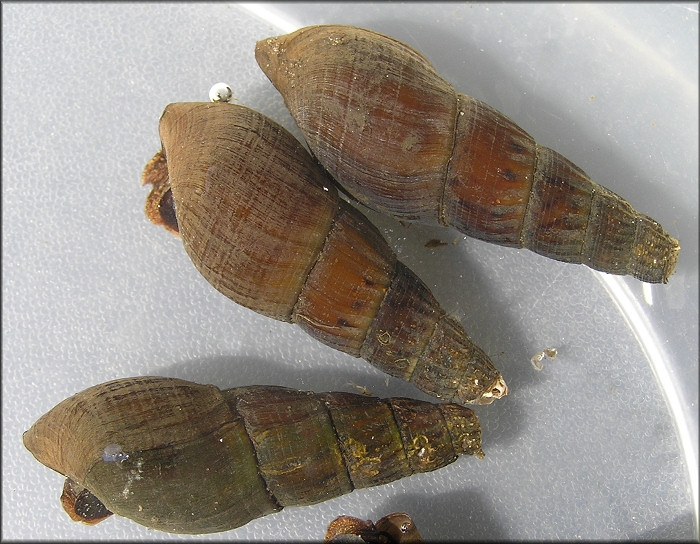 Melanoides turricula is a medium-sized, freshwater snail commonly known as the Fawn Melania. It is native to the Philippines and may be conspecific with the more widespread invasive Asian snail M. tuberculata. It has been introduced to tidal freshwater tributaries near Tampa Bay, Florida on the Gulf of Mexico. No other introductions are known for this species. It predominantly inhabits freshwater springs, streams, lakes and swamps, but is occasionally found in brackish and marine habitats. This species may compete with native freshwater snails, but little is known about its potential impacts.

Melanoides turricula is a freshwater snail described from the Phillipines, possibly conspecific with the more widespread invasive Asian snail M. tuberculata (Lee 2006; Thompson 1999). It was reported from Florida waters by 1984 (Thompson 1984, cited by McCann et al. 1996). While this snail prefers clearer, more flowing water than M. tuberculata, it does occur in tidal fresh tributaries of Tampa Bay (Baker et al. 2004). Melanoides turricula is also known from nontidal freshwaters of Florida (Lee 2006; USGS Nonindigenous Aquatic Species Program 2013). One population, in an artificial pond near Jacksonville, was initially identified as M. turricula, but was later considered to be an unidentified species (Lee 2013). We have not found introduced records of this snail from elsewhere in North America, or in the rest of the world.

Melanoides turricula was reported from springs and streams in Florida at least as early as 1984 (Thompson 1984, cited by McCann et al. 1996). The precise date of its introduction is unknown, owing to confusion with M. tuberculata. It was present in Eureka Springs, adjacent to the tidal Hillsborough River, east of Tampa Bay, by 1996 (McCann et al. 1996). It has aso been reported from the non-tidal Withlacoochee River in Marion County (McCann et al. 1996 USGS Nonindigenous Aquatic Species Program 2013).

Melanoides turricula is a medium-sized freshwater snail. It has an elongate-conical, dextrally coiled, shell with 8-12 whorls and a strongly pointed spire, though the tip is usually eroded. The shell is sculptured with fine spiral threads and fine vertical ribs on the uppermost whorls. The base of the shell usually lacks a spiral band. The aperture has a tear-drop shape and the operculum is horn-colored. The shell reaches a length of about 30-40 mm. The shell is olive-green, with vertical reddish flames and spots. This form could be an ecotype or subspecies of the highly variable and widespread M. tuberculata (Thompson 2004), but we will treat it provisionally as a distinct species. There are at least 47 named species of Melanoides, excluding synonyms (Galli 2013), so the identification of these snails is challenging.

We have very little information about the biology of Melanoides turricula (Fawn Melania), but its life history and ecology is expected to be similar to that of M. tuberculata, with predominantly parthenogenetic reproduction and direct development (Livshits and Fishelson 1983). Snails of this family feed on detritus and microalgae (Miranda and Perissinotto 2012).

No impacts have been reported for Melanoides turricula in Florida waters. Like M. tuberculata, it is a potential competitor with native freshwater snails (Warren 1997), but the extent of its abundance and distribution is unknown.