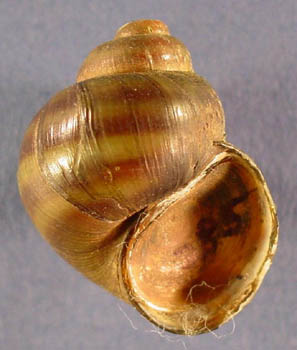 Viviparus georgianus is a large freshwater snail commonly known as the Banded Mystery Snail. It is native to North America, ranging from the Mississippi drainage and Southeast Atlantic drainages of Illinois to Louisiana and Georgia to Florida. It is an attractive snail, which has been widely introduced in Northeastern North America by collectors, the aquarium trade, and canals. It has been introduced to some tidal, but low salinity, areas including the Hudson River Estuary, New York; the Delaware River, Pennsylvania; and the Potomac River, Virginia. It is typically found in habitats that are muddy and vegetated, but may include some rocks, coarse woody debris, or man-made structures. There are no reported impacts for this species in estuarine areas where it has been introduced.

Viviparus georgianus, together with other members of the 'V. georgianus' species complex, are native to the Mississippi drainage and Southeast Atlantic drainages from Illinois to Louisiana and Georgia to Florida (Clench 1962; Burch 1982; Katoh and Foltz 1994). Viviparus georgianus is an attractive snail, which has been widely distributed in Northeastern North America by collectors, the aquarium trade, and canals (Clench 1962; Clench and Fuller 1965; Mills et al. 1993; Mills et al. 1997).

The first introduction of Viviparus georgianus to Atlantic Coast drainages was to the Mohawk River, New York (NY) by James Lewis, an amateur naturalist, in 1867. Multiple introductions from aquarium releases, barge traffic, etc. are likely (Clench 1962; Mills et al. 1993; Mills et al. 1997). It was first found in Lake Michigan in 1906, in Lake Erie in 1914, and in the St. Lawrence estuary, Quebec in 1953 (Bousfield 1955). It probably reached the Hudson and Lake Erie by Lewis's introduction in the Mohawk River, but spotty distribution in the Hudson basin indicates multiple introductions. This snail reached the Hudson estuary at Albany by 1895 (Marshall 1895, cited by Strayer 1987). By 1922, it was found in Annandale, NY, in the Sawkill River about 75 km downstream. It was locally abundant in two 1980’s surveys (Strayer 1987; Jokinen 1992). However, no specimens were collected in a 2008 survey (Coote and Strayer 2008).

Introductions outside the Great Lakes and Hudson River probably came from the use of this attractive snail in aquariums and fish ponds. Viviparus georgianus was first reported from ponds in the Boston Public Gardens in 1916, and soon became widespread in the Charles River in the vicinity of Boston (Clench 1962; Clench and Fuller 1965). Along the Delaware River, it was first reported in Fairmont Park, Philadelphia in 1909 (Clench 1962; ANSP 98696, A9232, Academy of Natural Sciences of Philadelphia 2014). In the Chesapeake Bay region, V. georgianus has only been found in the Potomac River. The oldest United States National Museum of Natural History specimens are dated 1901, from Hunters Point, Alexandria, Virginia (VA). This snail was reported from Seneca, Maryland and Great Falls to Alexandria and Mount Vernon, VA (Clench 1962; United States National Museum of Natural History collections). Diilon (2013) noted a map record from Swan Creek Maryland, on upper Chespeake Bay (Dillon 2013).The present abundance and distribution are not known. Paul Fofonoff (Smithsonian Environmental Research Center) has not found shells of this snail in occasional searches along the tidal and lower nontidal Potomac (1996-2000), so it may be less abundant than Bellamya chinensis (Chinese Mystery Snail) and B. japonica (Japanese Mystery Snail) (Fofonoff, personal observation).

Viviparus georgianus in the Southeastern United States appears to be a part of a species complex. Genetic and morphometric studies have established at least two new species, Viviparus limi (Ochlockonee Mystery Snail) and Viviparus goodrichi (Globose Mystery Snail), in Florida and Georgia Atlantic drainages. Additional species are likely within this complex (Katoh and Foltz 1994). Two other native species, V. subpurpureus and V. intertextus, native to Mississippi-Gulf drainages are more distinct, but still quite similar (Clench 1962). Some records and museum specimens in Atlantic Coast watersheds (St. Lawrence, Potomac) have been identified as the European V. viviparus or V. contectus (Bousfield 1955; Dundee 1974; Academy of Natural Sciences of Philadelphia 2014; Museum of Comparative Zoology 2014; US National Museum of Natural History collections), or as the North American V. subpurpureus (ANSP 27709, from Washington DC, Academy of Natural Sciences of Philadelphia 2014). We will follow Clench (1962) in referring to introduced populations in the Great Lakes, St. Lawrence River, and Atlantic drainages from Massachusetts to Virginia as V. goergianus, but clearly, the identity of these snails requires more examination.


Cipangoplaudina chinensis is native to China and widely introduced in North America (Clench 1962; Smith 2000). Its current occurrence and abundance in the Potomac River is uncertain.


Hexagen japonica (formerly Cipangopaludina japonica) is naitve to Japan, and widely introduced in Noirth America.It is currently abundant in the Potomac estuary.

Viviparus limi
Viviparus limi is native to the Gulf of Mexico drainages of the central portion of the Florida panhandle (Ocklochonee River drainage) (Katoh and Foltz 1994).

Viviparus viviparus
This is a European species. Records of this snail in North American waters have been reported but not confirmed. Most records have been re-identifed as V. georgianus (Clench 1962).

Viviparus georgianus is a large freshwater snail. Sexes are separate and males have an enlarged right tentacle, which is used in copulation (Fretter and Graham 1962). Females are larger than males, overall mean size at maturation was 13 mm for males and 14 mm for females, and maturation occurred about 1 year after birth. Eggs are fertilized internally and develop in a brood chamber. Eggs take about 60 days to develop and the young are born at about 6 mm shell length. Estimated annual fecundity is 39 embryos per year (Keller et al. 2007). Male snails can live about 18 months and reach a maximum of 22 mm length, while females can live for 3 years and may measure 44 mm (Browne 1978).

Viviparus georgianus tolerates a wide range of temperature, ranging from the Gulf Coast to northern lakes that regularly have ice-cover. It inhabits slowly flowing and stagnant rivers, streams, canals, and lakes (Clench 1962; Strayer 1987; Jokinen 1992). Salinity tolerance of V. georgianus is not known, but is probably similar to that of European V. viviparus (Fretter and Graham 1962). In New York State it tolerated a wide range of soft/hard water conditions, and a pH range of 6.3-8.5 (Jokinen 1992). Typical habitats are muddy or silty and vegetated, but may include some rocks, coarse woody debris, or man-made structures (Duch 1976; Jokinen 1992).

Viviparus georgianus feeds like many other snails, scraping diatoms and other algae off the sediment surface and hard substrates with its radula (Duch 1976). However, it has another feeding mode, in which it lies half-buried in sediment and filters water through its elaborate gill filaments, capturing suspended particles of phytoplankton and sediment (Fretter and Graham 1963). Predators probably include crayfishes, fishes, waterfowl, and mammals.

In some Minnesota lakes, Viviparus georgianus has developed very high biomasses, followed by die-offs, forming windrows of shells on the shore and unpleasant odors (Bury et al. 2007). However, we are not aware of impacts in invaded estuaries.

Clench, William J. (1962) A catalogue of the Viviparidae of North America with notes on the distribution of Viviparus georgianus Lea, Occasional Papers on Mollusks, Museum of Comparative Zoolgy, Harvard University 2(27): 261-287

Richards, Horace G. (1934) A list of mollusks of the District of Columbia and vicinity, American Midland Naturalist 15: 85-88

Strayer, David (1987) Ecology and zoogeography of the freshwater mollusks of the Hudson River Basin, Malacological Review 20: 1-68