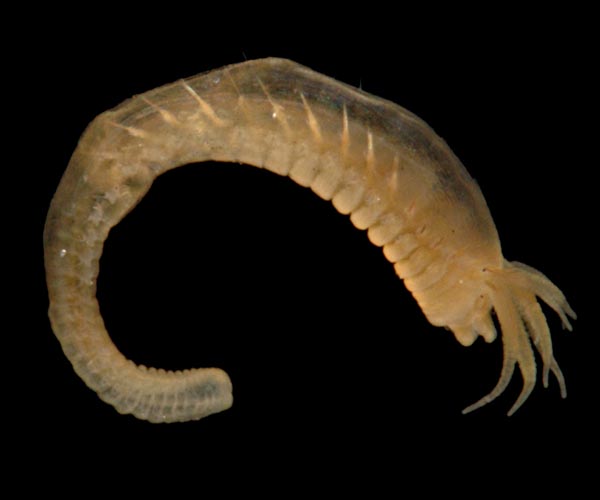 Hobsonia florida is a small, tube-dwelling polychaete first described from the Gulf coast of Florida. Its native range spans from Maine to Texas along the eastern coast of North America. A population has been reported from Venezuela, but its origin status is unknown or cryptogenic. It is introduced on the west coast, spanning from Oregon to British Columbia. It is characteristic of brackish conditions within estuaries and can be found in mudflats, tide-pools, tidal ponds, saltmarshes, and eelgrass beds. It can tolerate a wide range of temperature and salinity. It is an abundant infaunal deposit feeder in its introduced range, but no negative impacts have been reported.

The infaunal polychaete Hobsonia florida was described from the Gulf Coast of Florida by Hartman (1951), and again, from Massachusetts, as Hypaniola grayi (Pettibone 1953). This worm is native to estuaries of the Atlantic and Gulf coasts of North America from Maine to Texas (Pettibone 1977), and has recently been reported from Venezuela (Díaz-Díaz and Liñero-Arana 2012). It has occurred on the West Coast, at least since the 1940s (Hobson and Banse 1981). Hobsonia florida is frequently found in brackish waters, and sometimes in fresh or nearly fresh tidal waters (Pettibone 1953; Banse 1979; Cohen et al. 2001).

Hobsonia florida was first reported from the West Coast by Banse (1979). However, it was abundant in preserved samples from Puget Sound, Washington (WA) collected as early as 1940 (Hobson and Banse 1981). Its introduced range currently spans from the Fraser River Delta, British Columbia (BC) (Banse 1979; Sewell 1996) to Coos Bay, Oregon (OR) (Fritz 2001). It is abundant at mudflat sites in the Fraser River Delta, BC; Skagit Bay, WA (Gallagher et al. 1983); Grays Harbor, WA (Banse 1979); Willapa Bay, WA (Cohen et al. 2001); the Columbia River estuary (Furota and Emmett 1993; Sytsma et al. 2004), Yaquina Bay, OR (Castillo et al. 2000) and a salt marsh in Coos Bay, OR (Fritz 2001). To our knowledge, H. florida has not been reported from California. The likeliest vector for transport is with Eastern Oysters (Crassotrea virginica) in the 19th and early 20th centuries. This polychaete is an infaunal tube-dweller, without a planktonic larva (Zottoli 1974), but ballast water transport might be possible if worms are swept up in suspended sediment.

Hobsonia florida is a small, tube-dwelling ampharetid polychaete, characteristic of soft sediments in brackish water. The worm is inflated anteriorly, tapered towards the posterior end, and terminates in a swollen anal knob (pygidium). The body wall is thick, and segmentation is prominent on the ventral side of the body, but on the dorsal side, the body wall is thin, and segments are poorly defined. The prostomium and segments 1-4, with branchiae (gills), constitute the head region. The thoracic region is about 2/3 of body length, and has weakly developed parapodia, with cylindrical notopodia bearing notochatae, starting on segment 3, and neuropodial uncini (rasp-lile chaetae) beginning on segment 6. There are 17 thoracic segments (starting with 3). The abdominal region consists of 28 segments, lacks notopodia, and has differently shaped uncini (Hartman 1951; Pettibone 1953; Banse 1981).

The prostomium is three-lobed and can be protruded forward to form a broad snout, with a central portion defined by two ridges. There are a pair of eyespots at the dorsal base of the prostomium. Posterior to the prostomium, the first (buccal) segment lacks chaetae. The mouth contains up to 20 pairs of oral tentacles, which can be extruded, or retracted completely. Segment 2 (paleal segment) forms a kind of collar, into which the buccal segment and prostomium can be partially retracted. There are four pairs of long, tapering branchiae (gills), on segments 2-5, with fan-shaped bundles of paleal chaetae at bases of the first pair of branchiae on segment 2. Segments 3-5 have short, cylindrical notopodia, with bundles of notochaetae, but neuropodial structures are absent (Hartman 1951; Pettibone 1953; Banse 1981).

Segment 6, and posterior thoracic segments bear both notopodia with chaetae, and neuropodial uncini, short paddle-like structures, bearing fine teeth. The abdominal segments lack notopodia, but have unicni which have a row of small teeth and a prominent cirrus, on the anterior segments. The cirri diminish posteriorly. The pygidium is slightly enlarged, and lacks anal cirri. Adult H. florida are 8-30 mm. Their color is greenish, with white spots. The worm lives in a 'rather straggly' tube composed of sand-grains and detritus, cemented with mucus, about five times the length of the animal, and with the top projecting above the bottom surface (Description from: Hartman 1951; Pettibone 1953; Zottoli 1974; Pettibone 1977; Banse 1981).

Amphicteis gunneri
Hobsonia florida was originally treated as a subspecies of this cosmopolitan cold-water form (Hartman 1951).

Hobsonia florida is an ampharetid polychaete which dwells in a tube composed of mud, sand, and detritus, held together by mucus (Pettibone 1953). The tube is several times its body length. The upper third of the tube projects above the mud surface (Zottoli 1974). This worm is usually found in silty, brackish estuaries at salinities of 0-30 PSU (Pettibone 1953; Pettibone 1977). Sexes are separate. Eggs are laid inside the tube, and are apparently fertilized by sperm in incoming water (Zottoli 1974). The larvae develop inside the tube, passing through a trochophore stage, and start crawling outside the tube at the 3-chaetiger stage. Worms at this stage begin constructing their own tubes. Oral tentacles appear at the 8-chaetiger stage, while branchiae begin appearing at 11-chaetigers. Adults are mature at a length of about 8 mm (Zottoli 1974).

Based on its geographical range, this polychaete appears to tolerate a very wide range of temperature, from ice-covered winter conditions to tropical summers (Pettibone 1977; Díaz-Díaz and Liñero-Arana 2012). It is characteristic of brackish conditions within estuaries and can be found in mudflats, tide-pools, tidal ponds, saltmarshes, and eelgrass beds. Typical substrates include mud, sand, clay, and detritus (Pettibone 1953; Pettibone 1977; Gallagher 1983; Furota and Emmett 1993; Cohen et al. 2001). Hobsonia florida uses its tentacles to remove particles from the sediment surface (Fauchauld 1979). Likely predators include the burrowing sea anemone Nematostella vectensis (Zottoli 1974), crabs, shrimps, fishes, and birds, although Western Sandpipers (Calidris maurae) had no significant effect on their abundance (Sewell 1996).

Hobsonia florida is an abundant infaunal deposit-feeder in West Coast estuaries from Coos Bay, Oregon to the Fraser River estuary, British Columbia (Banse 1979; Fritz 2001). In the Columbia River estuary, it was ~10-50% of the benthic community by number, but only ~1-5% of the biomass (Furota and Emmett 1993). It probably plays an important role in the feeding of smaller organisms. However, in an enclosure experiment on the Fraser River delta, there was no significant feeding on this polychaete by Western Sandpipers (Calidris maurae) (Sewell 1996).

Habitat Change - Hobsonia florida was one of several tube-building organisms which favored the recruitment of other tube-building organisms on the Skagit delta mudflats, Puget Sound. In experiments in which the density of H. florida was increased, the recruitment of the polychaete Manayunkia aestuarina and the tube-building crustacean Tanais sp. also increased, apparently due to physical effects of the worm tubes on water-flow, or organic deposition around the worm tubes (Gallagher et al. 1983).

Banse, Karl (1981) On some Cossuridae and Maldanidae (Polychaeta) from Washington and British Columbia., Canadian Journal of Fisheries and Aquatic Sciences 38: 633-637

Fauchald, Kristian; Jumars, Peter A. (1979) The diet of worms : A study of polychaete feeding guilds, Oceanography and Marine Biology, an Annual Review 17: 193-284

Hartman, O. (1951) The littoral marine annelids of the Gulf of Mexico, Publications of the Institute of Marine Science 2(1): 7-124

Pettibone, Marian H. (1953) A new species of polychaete worm of the family Ampahretidae from Massachusetts, Journal of the Washington Academy of Sciences 43(11): 384-386

Pettibone, Marian H. (1977) The synonymy and distribution of th4e estuarine Hypaniola florida (Hartman) from the East Coast of the United States (Polychaeta: Ampharetidae), Proceedings of the Biological Society of Washington 90(2): 205-208

Zottoli, Robert A. (1974) Reproduction and larval development of the ampharetid polychaete Amphicteis floridus, Transactions of the American Microscopical Society 93(1): 78-89