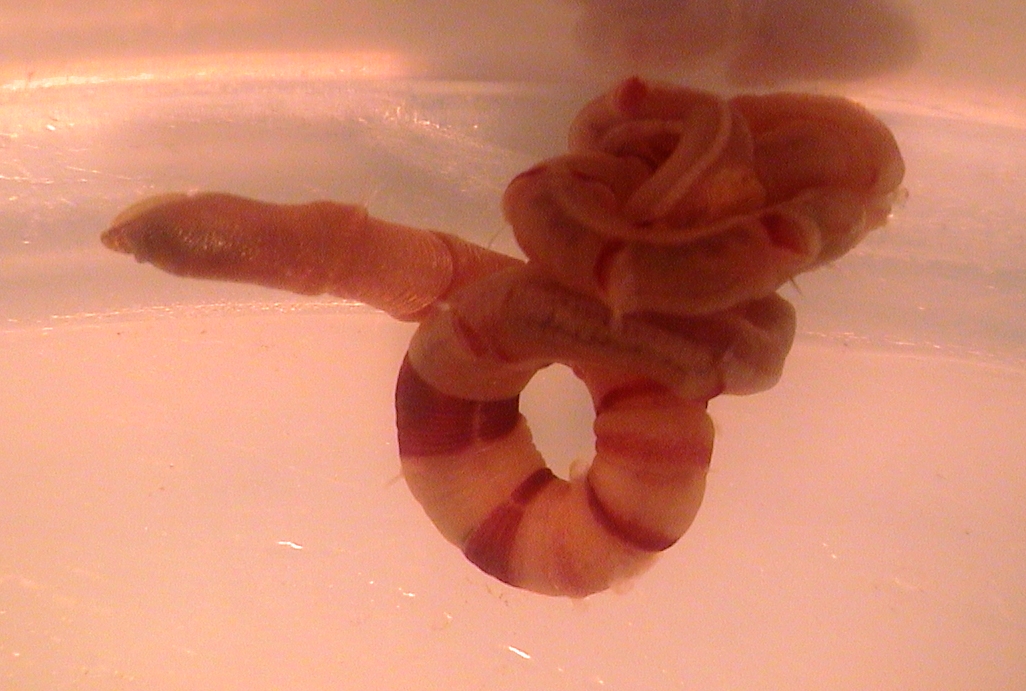 Clymenella torquata is a head-down tube-dwelling polychaete with a slender body. It has elongated body segments and poorly defined parapodia. It is native to the Northwest Atlantic, where it spans from the Gulf of St. Lawrence to Texas. Beyond its native range, populations are known from England, British Columbia and Washington. It is found in mud, sand, and gravel habitats and can tolerate a wide range of temperatures and salinities. In its native and introduced ranges, it can develop dense populations, having significant effects on the quality of surrounding sediment. In Samish Bay, Washington, where it has recently invaded, it has had adverse effects on habitats and Pacific Oyster (Crassostrea gigas) culture.

Clymenella torquata is a tube-dwelling polychaete, native to the northwest Atlantic, where it occurs from the southern Gulf of St. Lawrence and the Bay of Fundy to Texas (Mangum 1962; Hughes and Thomas 1971). This worm was first collected in England in 1947 and later found in Ireland (in 2006, Minchin 2007). It was found to be abundant in mudflats of Boundary Bay (British Columbia-Washington) in 1976 (Swinbanks and Murray 1981), and was collected there again in 1980 (Banse 1981). In 2006, C. torquata was found to be abundant in Samish Bay, Washington, where it can cause problems for oyster-rearing operations (Mach et al. 2012).

Clymenella torquata was collected in 1976 (Swinbanks and Murray 1981) and 1980 (Banse 1981) in Boundary Bay, British Columbia. It may have been introduced with plantings of Eastern Oysters (Crassostrea virginica) in the 1930s (Mach et al. 2012). In 2008, established populations of this worm were found in Campbell River on Vancouver Island and Roberts Bank on the Fraser River Delta (Mach et al. 2012). A notable range extension was an occurrence in Samish Bay, Washington, 75 km south of Boundary Bay, where this worm was first reported in 2006 (Davis 2007). Clymenella torquata has a benthic larva, so oyster and clam transplants, are the likeliest vector for the spread of this polychaete.

Clymenella torquata was first reported from Europe in Whitstable, Kent, on the English Channel, in 1947, possibly introduced with a planting of Eastern Oysters in 1936. It is apparently still established there. A single specimen was collected in Northumberland in 1976 (Eno et al. 1997). This worm was collected in Carlingford Lough, Northern Ireland in 2006 (Minchin 2007). Transplants of Eastern Oysters were the likely vector for introduction of C. torquata to the British Isles (Eno et al. 1997).

The head is blunt and concave, with an oval prostomium. The cephalic plaque is wrinkled. The mouth is ventral. The nuchal organs are broad and parallel, running along the surface of the cephalic plate. Chaetiger 1 has 5-10 notochaetae. The neuropodia of the first 3 chaetigers have ridges bearing 9-12 uncini in rows. The 4th chaetiger has a membranous collar, which extends anteriorly to cover part of chaetiger 3. There are three pre-anal segments, lacking chaetae. The anus is central. The anal cirri are all about the same length. The overall length of adult worms ranges from 50 to 195 mm, although more commonly does not exceed 110 mm. The color is variable, but usually slightly iridescent yellow-orange, with red blood-vessels near the joints. Some populations are tinged with dull brown, while others accumulate green pigment, depending on the habitats, sandy or muddy respectively (Leidy 1855; Hartman 1945; Newell 1949; Hartman 1951; Mangum 1962; Banse 1981; Hobson and Banse 1981; Kozloff 1987; Lippson and Lippson 1994; Mach et al. 2012).

Clymenella californica
This species has spines in its neuropodia and 21 chaetigers. It has been reported from low intertidal mud in San Francisco Bay (Blake and Ruff 2007).

Clymenella complanata
This species has spines in its neuropodia and 22-27 chaetigers. It has been reported from crevices in shale rocks in San Mateo County (Blake and Ruff 2007).

Clymenella torquata is a marine, tube-dwelling polychaete, found in mud, sand, and gravel in intertidal and subtidal habitats. The sexes are separate. The period of spawning in Massachusetts and Britain is brief, over a few days in April or May, possibly determined by tidal conditions. Eggs are deposited in the mud near the mouth of the tube, and are fertilized by sperm shed into the water (Mead 1897; Newell 1951). The larvae are demersal, developing through a trochophore stage and reaching a length of 0.6 mm and several segments in about a week. They are capable of feeding on benthic diatoms and constructing tubes in about 10 days. Metamorphosis is gradual, and is more or less complete in 24-25 days (Newell 1951). In the northern part of the range, at least, spawning appears to be annual.

Clymenella torquata tolerates a wide range of temperature and salinity as indicated by its native range and experimental data, from near-freezing to 40.5°C, and salinities of 15-40 PSU (Mangum 1964; Wass 1972; Kenny 1969a; Kenny 1969b). It can withstand relatively low oxygen and/or high hydrogen sulfide concentrations (Fuller 1994). The substrates this worm inhabits include fine gravel, sand, and mud (Mangum 1964). The worm dwells head-down in a vertical tube, up to 200 mm long, composed of sand or mud particles, detritus, and mucus. The cylindrical tube extends 5-30 cm deep, and projects above the surface of the sediment, with the anal cirri projecting when the animal is undisturbed (Lippson and Lippson 1997). Tube building was most efficient with sand grains of 0.25 to 0.84 mm, at 25 C and 35 PSU ( (Kenny 1969). In estuaries with wide tidal ranges, C. torquata is abundant in the lower intertidal zone, but in estuaries with a small tide range, it is limited to subtidal waters (Mangum 1964). Clymenella torquata can obtain surface food in two wayS: ingesting sediment directly from the mouth deeply in the sediment or using the posterior body to hoe the surface material directly into the tube (Dobb and Whitlatch 1982; Weinberg 1988). The worms often show missing and/or regenerating segments, indicating sublethal predation (Mangum 1964), by fishes (Schneider & Harrington 1981), shorebirds (Schneider & Harrington 1981) or other predators. The regneration ability of this worm has been studied. It seems to have have different tail- and head-determining factors according to the body region involved and it usually tends to maintain its original 22 segments (Sayles 1942; Smith 1963).

In dense populations, Clymenella torquata can function as an ecosystem engineer, by modifying the quality of sediments, sub-ducting organic and inorganic matter, oxygenating and loosening packed sand, and mixing sediments with detritus and mucus (Sanders et al. 1962; Levin et al. 1997). Moreover its role can be considered positive for the retention and burial of eelgrass seeds, thereby favoring germination (Luckenbach and Orth 1999). This worm has recently invaded Samish Bay, Washington, and in this new environment it has had adverse effects on oyster culture by destabilizing the sediment through bioturbation (Davis 2007; Hancock et al. 2008; Mach et al. 2012). In its native range, it can increase the surface microbial mat leading to microalgal enrichment which stabilizes surface sediments (Dobb and Whitlatch 1982; Fuller 1994; Leven et al. 1997; Lukenbach and Orth 1999; Campbell and Lindsay 2014).

Fisheries - Clymenella torquata has had adverse impacts on Pacific Oyster (Crassostrea gigas) culture in Samish Bay, where oysters were cultivated on a packed sand bottom. The worms developed dense populations, excreting fine sand and detritus out of their tubes, and pumping in water, softening the sediment, and creating areas of soft muck, which can suffocate oysters. Several control methods have been tried to reduce worm densities and increase the firmness of the sediment (Davis 2007; Hancock et al. 2008; Mach et al. 2012).

Clymenella torquata can develop dense populations in its native and invaded ranges, and can have significant effects on the qualities of the sediment it inhabits. The worms feed head-down in their tubes in the sediment, ingesting and excreting fine sediment and detritus, which is replaced by water, creating a loose, spongy texture in the sediment. The effects were seen in Barnstable Harbor, Massachusetts, where C. torquata is native, but also recently in Samish Bay, Washington (Sanders et al. 1962; Mach et al. 2012). In addition to adverse effects on oyster culture, the altered sediment is considered a threat to eelgrass, important as food and habitat for fishes and waterfowl (Davis 2007; Hancock et al. 2008).

Banse, Karl (1981) On some Cossuridae and Maldanidae (Polychaeta) from Washington and British Columbia., Canadian Journal of Fisheries and Aquatic Sciences 38: 633-637

Hartman, O. (1951) The littoral marine annelids of the Gulf of Mexico, Publications of the Institute of Marine Science 2(1): 7-124

Lacalli, T. C. (1980) A guide to the marine flora and fauna of the Bay of Fundy: Polychaete larvae from Passamaquoddy, Canadian Technical Report of Fisheries and Aquatic Sciences 940: 1-26

Leidy, Joseph (1855) Contributions towards a knowledge of the marine invertebrate fauna, of the coasts of Rhode Island and New Jersey, Journal of the Academy of Natural Sciences of Philadelphia <missing volume>: 135-151

Rankin, J. E. (1946) Notes on the ecology of the polychaete annelid Clymenella torquata (Leidy), with particular reference to color, Ecology 27: 262-264

Sayles, Leonard P. (1942) Buds induced in Clymenella torquata by implants of nerve cord and neighboring tissues derived from the mid-body region of worms of the same species, Biological Bulletin 82(1): 154-160

Weinberg, James R.; Whitlatch, Robert B. (1983) Enhanced growth of a filter-feeding bivalve by a deposit-feeding polychaete by means of nutrient regeneration, Journal of Marine Science 41: 557-569