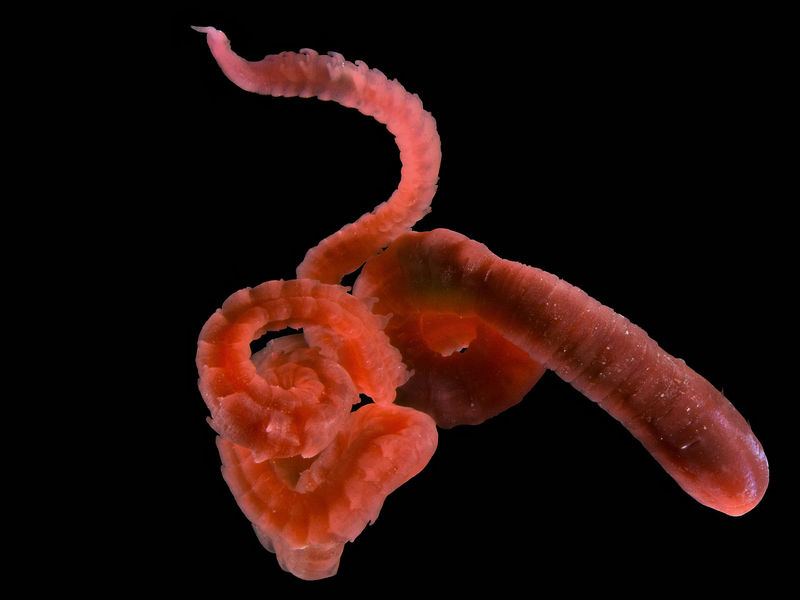 Heteromastus filiformis belongs to the Capitellidae family, a group of earthworm-like burrowing polychaetes. Populations are known from many regions around the world, spanning from Arctic to tropical waters. High variation in the environmental conditions where populations are noted suggests that H. filiformis is likely a complex of cryptic species. However, molecular studies are needed to untangle the taxonomy, biogeography, and invasion history of this group. It was described from the Mediterranean coast of France in 1864 and reported throughout the East Coast of North America (Maine to North Carolina) in 1870s-80s. Its more recent collection on the US West coast is indicative of an introduction. Possible vectors include transport of larvae, or suspended adults in ballast water, and transport with plantings of Eastern Oysters (Crassostrea virginica). No ecological or economic impacts are currently known for this species complex.

Heteromastus filiformis was described by Claparede in 1864 from Port-Vendres, on the Mediterranean coast of France, and later re-examined by Eisig, near Genoa, Italy in 1887. It was subsequently found on the East Coast of the US from Maine to North Carolina in the 1870s-80s (Hutchings and Rainier 1982). This worm has been reported in muddy-silty sediments on the coasts of every continent, except Antarctica. It spans Arctic and tropical waters, from the upper intertidal to the abyssal zone and from 5-40 PSU (Hartman 1947; Wolff 1973; Hartmann-Schroder 1980; Dean 2011; Weslawski et al. 2012; de Kluijver et al. 2014). Very likely 'H. filiformis’ represents a complex of cryptic species, similar to those found in its cosmopolitan relative, Capitella capitata (Eckelbarger and Grassle 1987).

However, the relatively recent collections and apparent spread of Heteromastus filiformis on the West Coast of North America, well after the onset of invertebrate collections, suggests that this polychaete has been introduced. It was first collected in San Francisco Bay in 1936, and found in harbors and bays from British Columbia (1st record 1962, Berkeley 1966) to Morro Bay (1st record 1960, Reish and Barnard 1967). Possible vectors include transport of larvae, or suspended adults in ballast water, and transport with plantings of Eastern Oysters (Crassostrea virginica). Occurrences in Prince William Sound, Alaska, may be the result of transport by shipping (1st record 1972, Hines et al. 2000), while deep water collections in the Bering Sea probably represent native Arctic cryptic species (US National Museum of Natural History 2015).

Heteromastus filiformis was first collected on the West Coast in San Francisco Bay, California (CA) in 1936 (Hartman 1947). It occurs at high densities in the central, South, and San Pablo Bays, and inland as far as Pittsburg, Suisun and Grizzly Bay (Carlton 1979; Nichols and Thompson 1985a; Nichols and Thompson 1985b; Peterson and Vayssieres 2010; California Academy of Sciences 2015). In 1962, this polychaete was collected at 24 m depth off Comox, Vancouver Island, in the Strait of Georgia (Berkeley 1966). Subsequent collections were made at Grays Harbor, Washington (1st record 1977, Albright and Smith 1977, cited by Carlton 1979); the Columbia River estuary (before 2002, Systsma et al. 2004); Coos Bay, Oregon (1st record 1970, Carlton 1989; Wonham and Carlton 2005); and Humboldt Bay, CA (2000, Boyd et al. 2002). More recently, it was collected in Southern California (Mission Bay and /Los Angeles-Long Beach Harbor in 2011 (California Department of Fish and Wildlife 2014).

However, specimens of 'Heteromastus filiformis' were collected in Alaskan offshore waters in the Bering Sea, near the Pribilof Islands at 135 m in 1976 (USNM 63505-63509, US National Museum of Natural History 2015), and in deep waters (524 m) off California (1988, USNM 123124, US National Museum of Natural History 2015). These deep water specimens presumably represent native Arctic or deep water members of the H. filiformis species complex. Specimens identified as H. filiformis occur in the Arctic Ocean, off Svalbard, down to 900m (Weslawski et al. 2012).

Heteromastus filiformis has been considered native or cryptogenic over much of its range. Introductions in ballast water, fouling, dry ballast, or with oysters are possible; however, given its small size, burrowing habitat, and paucity of distinguishing morphological features, it is likely that a number of cryptic species occupy its nominal range. Early records for Australia and New Zealand are 1969 in Port Philip Bay, Victoria (Hutchings and Rainier 1982) and 1976 in Hawke Bay, New Zealand (Knox and Fenwick 1981).

Heteromastus filiformis is probably a complex of cryptic species belonging to the Capitellidae family. They lack protostomial or peristomial appendages, with branchiae absent or greatly reduced. The body has a distinct protostome, a thoracic version with a fixed number of segments, and a variable number of abdominal segments. Capitellids as a group are among the most abundant polychaetes in soft-bottom communities (Hartman 1947; Blake and Ruff 2007).

The body of H. filiformis is slender and fragile. The prostomium is small and conical, without eyespots or appendages. The thorax consists of 11 chaetigers and is slightly inflated anteriorly. Chaetigers 1-5 have capillary chaetae, while 6-11 have hooded hooks. The abdominal chaetae are all hooded hooks. From chaetigers 90-100, posteriorly, there are pairs of small, single, finger-like branchiae on each segment. The pygidium has a long, pointed terminal process. Specimens from the UK reach about 100 mm and have 140 segments (Hayward and Ryland 1990); specimens from the North Sea are about 180 mm with 150 segments; and specimens from the US East Coast are about 40 mm with 230 segments (Hutchings and Rainier 1982). Some of this size variation could be due to effects of preservation. The anterior region is dull red, while the posterior is reddish-yellow or greenish. Description based on: Hartman 1947, Hutchings and Rainier 1982, Hayward and Ryland 1990, Blake and Ruff 2007, and de Kluijver et al. 2014.

Limited comparative studies looking at the morphology, life history and genetics of H. filiformis populations have been conducted, to our knowledge. Hutchings and Rainier (1982) compared some populations and found no consistent morphological differences between specimens from Europe, the US East Coast, and Australia. Given the wide climate, habitat, and salinity range of records of H. filiformis, sibling speciation is likely. Molecular studies are needed to untangle the taxonomy, biogeography, and invasion history of the H. filiformis complex. Morphology and development of H. filiformis larvae from Passamaquoddy Bay, New Brunswick are illustrated by Lacalli (1980).

Mediomastus ambiseta
Juvenile Heteromastus filiformis have hooded hooks on chaetigers 4 and 5, and can be confused with Mediomastus spp. The hooded hooks are later replaced by capillary chaetae (Fredette 1982).

Mediomastus californiensis
Juvenile Heteromastus filiformis have hooded hox on chaetigers 4 and 5, and can be confused with Mediomastus spp. The hooded hooks are later replaced by capillary chaetae (Fredette 1982).

'Heteromastus filiformis' is a complex of cryptic species, found over a wide range of depth, climate, and salinity. Different populations are likely to vary in life history and environmental tolerances (Nygren 2014). Caution is advisable in generalizing information across regions. In European and Gulf of Maine populations, eggs are laid in gelatinous capsules on the sediment surface. Larvae are planktonic and planktotrophic (Lacalli 1980; Shaffer 1983). Larvae from Passamaquoddy Bay (Gulf of Maine) settled in ~17-18 days after hatching with ~11 setigers, at 400 μm length (Lacalli 1980).  Adults in populations in North Inlet, South Carolina, lived for at least 2 years (Shaffer 1983).

'Heteromastus filiformis has been reported from Arctic, temperate, subtropical and tropical seas. West Coast populations are known from shallow estuaries and mudflats, and probably tolerate a wide temperature range (Nichols and Thompson 1985b; Hopkins 1986). In the Rhine Delta, Netherlands, 'H. filiformis' occurs at salinities as low as 5 PSU, but is much more common at salinities above 18 PSU (Wolff 1973). In the San Francisco estuary, this worm is common as far upstream as Grizzly Bay in dry years, at 5-10 PSU, but is more abundant in San Pablo Bay (Peterson and Vaysieres 2010). 'Heteromastus filiformis' is a head-down burrower, preferring muddy sediments, though it also occurs in fine and median sand (Wolff 1973; Quintana et al, 2007). It is a deposit-feeder, and can burrow up to 15 cm beneath the sediment surface. The worm ventilates its burrow, and the oxygenated water in the burrow allows the worms to penetrate for some distance into anoxic sediments. Feeding is believed to be non-selective, on microalgae, detritus, and other organic particles (Wolff 1973). Fecal pellets are deposited on the sediment surface (Quintana et al. 2007). 'Heteromastus filiformis' often reaches high abundances, and is potentially an important food item for benthic invertebrates and fishes. However, caging experiments, in North Inlet, South Carolina, suggested that excluding large predators had no effect on this species density (Shaffer 1982).

Capitellid polychaetes, including Heteromastus filiformis, are an important component of infaunal communities, burrowing and reworking sediments, and increasing the oxygen penetration (Wolff 1973; Quintna et al. 2007). They are a potentially important food source for benthic predators. However, the specific impacts of H. filiformis are difficult to determine, since it coexists with many other native and cryptogenic capitellid polychaetes (Hartman 1947; Blake and Ruff 2007).

Hutchings, P. A.; Rainier, S. (1982) Designation of a neotype of Capitella filiformis Claparède, 1864, type species of the genus Heteromastus (Polychaeta: Capitellidae), Records of the Australian Museum 34(4): 373-380

Wolff, W. J. (1973) The estuary as a habitat: An analysis of data on the soft-bottom macrofauna of the estuarine area of the rivers Rhine, Meuse, and Scheldt, Zoologische Verhandelingen 126: 4-242