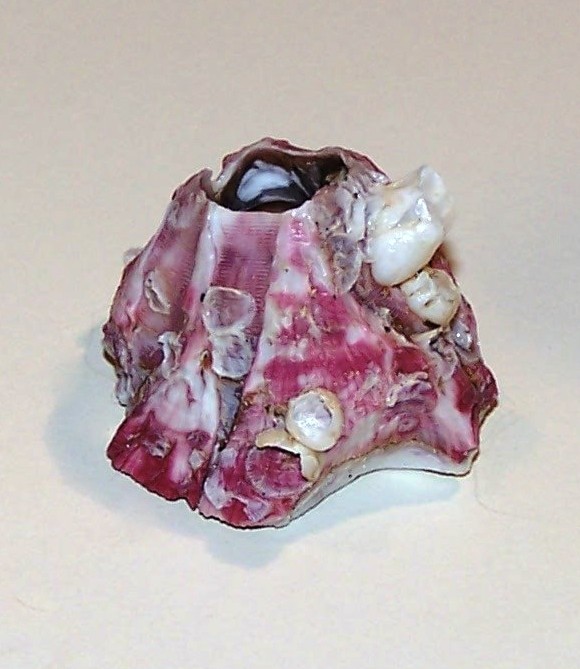 The Titan Acorn Barnacle, Megabalanus coccopoma, is a large barnacle growing up to 5 cm in height and width. It is native to the Eastern Pacific, ranging from Mexico to Peru. In the United States, it was first reported as introduced in Louisiana in 2001 and its non-native range now extends throughout the Gulf of Mexico and along the Atlantic coast of Florida, Georgia, South Carolina, and North Carolina. Elsewhere in the world, introduced populations have been reported from Belgium, the Netherlands, West Africa, Brazil, Australia, and Japan. Megabalanus coccopoma is currently rare in US waters; however, within its native range, from Mexico to Peru, it is a common fouling species on boats, ships, buoys, and other man-made structures.

Megabalanus coccopoma is native to the southeastern Pacific, ranging from Mexico to Peru. In the US, it was first reported from Louisiana in 2001 and its non-native range now extends throughout the Gulf of Mexico and along the Atlantic coast of Florida, Georgia, South Carolina, and North Carolina. Elsewhere in the world, introduced populations have been reported from Belgium, the Netherlands, West Africa, Japan, Australia and Brazil, and the Galapagos Islands.

In 2005, living and apparently established populations were found near Fort Pierce, Florida, in the Indian River Lagoon (Ruiz et al., unpublished data). In June 2006, a single specimen of M. coccopoma was collected from a buoy washed up on Ossabaw Island, Georgia (USGS Nonindigenous Species Program 2006). By 2007, populations were well-established in the Intracoastal Waterway, around St. Augustine, Florida, with settlement occurring in March-August. Settlement was not seen in creeks opening into the waterway, probably because of their lower salinity (Gilg et al. 2010). In 2006-2008, this barnacle was collected from Port Royal Sound, SC to Core Sound, NC (Southeast Regional Taxonomic Center 2011). Severe winters in 2010 and 2011 may have led to declines in M. coccopoma in the St. Augustine area and the Carolinas (USGS Nonindigenous Species Program 2008; Southeast Regional Taxonomic Center 2011). However, populations are expected to be resilient, according to Matthew Gilg (Edwards, 11/16/2011).

In 2001, large numbers of Megabalanus coccopoma were collected attached to pilings at Grand Isle, Louisiana (Perreault 2004). Barnacles above the high-tide mark had been killed by cold, and there were no signs of recruitment. Perreault (2004) found additional non-recruiting and/or dead populations elsewhere in the Gulf of Mexico, at Destin, Florida, and Port Aransas, Texas. These occurrences suggested that reproducing populations might be located elsewhere in the Gulf, perhaps on offshore oil platforms (Perreault 2004). More recently, established populations were found at Port Aransas in 2010 (Cohen et al. 2014). Cohen et al. (2014) also collected Megabalanus spp. in Pensacola and Tampa Bay, Florida, but these appear to belong to at least one different, cryptic species. Megabalanus coccopoma is established in Tamaulipas state, Mexico, about 300 km south of the US border (Celis et al. 2007).

In the 1970s, Megabalanus coccopoma was collected from buoys in Dutch waters, and misidentified as Balanus perforatus. In 1997-1999, it was found to be widespread on buoys in Belgian waters. Populations consisted of two or more generations, suggesting successful over-wintering and survival (Kerckhof and Cattrijsse 2001). Francis Kerckhof considers this species to be established in the southern North Sea (Kerckhof 2006, personal communication). In 2010, M. coccopoma was observed on fishing boats at Faraja, in the Gambia, West Africa, and was subsequently found growing on rocks along the shore, and in a private collection made in 2006 (Kerckhof et al. 2010). In Brazil, the first collection was from the Baia da Guanabara, near the city of Rio de Janeiro, in 1974 and it currently ranges from the states of Espirito Santo to Rio Grande do Sul. In many locations in this range, it has become the dominant species, and appears to have partially replaced previously reported populations of M. tintinnabulum (Young 1994).

Megabalanus coccopoma is a large barnacle, sometimes globular or cylindrical in shape and up to 50 mm in diameter. Its plates are slightly rough or finely ribbed. The orifice is moderately small, usually less than one-half the basal diameter, and it is subtriangular to subovate in shape. The scutum has a very broad, obtusely inflected tergal segment, and strong, closely set growth ridges. The margin along the aperture is strongly toothed, with longitudinal striae faint or absent. The articular ridge is four-fifths the length of the tergal margin, and the adductor ridge is strong and well-separated from the articular ridge. The tergum is moderately narrow, with a moderately long spur, separated by its own width or less from the basiscutal angle. Its growth ridges are faint to moderately strong, with an articular ridge approximately four-fifths the length of the scutal margin. The color is usually deep red, occasionally with fine white longitudinal lines or stripes. The radii are deep purple or reddish purple. The scutum is purple to reddish-purple, while the tergum is white (Pilsbry 1916; Ross 1962; Laguna 1985; Henry and McLaughlin 1986). Larval development of this species has been described and illustrated by Severno and Resgalla (2005).

A genetic analysis of Megabalanus spp. collected on the Gulf and southeastern coast of the US and Brazil concluded that most populations were M. coccopoma, although multiple lineages of this species were present. However, at least one cryptic species of Megabalanus was present (Cohen et al. 2014).

Megabalanus coccopoma, like many other barnacles, is hermaphroditic, but is capable of cross-fertilization. The fertilized eggs are brooded in the mantle cavity, sometimes for several months, and are released as nauplius larvae with three pairs of appendages (Barnes 1983). The nauplii feed in the plankton and go through five successive molts, spending 6 to 20 days (about 3 weeks) in the water column (Severino and Resgalla 2005), before molting into a non-feeding cypris stage, covered with a pair of chitinous shells. Cyprids swim, investigating suitable surfaces, and then settle, secreting a shell and molting into the first juvenile barnacle stages. Juvenile and adult barnacles are filter feeders, sweeping the water with their long, bristled appendages that gather phytoplankton, zooplankton, and detritus (Barnes 1983).

Megabalanus coccopoma prefers intertidal and shallow subtidal (less than 100 m depth) regions of marine waters. Newman and McConnaughey (1987) describe this species as an opportunist and highly gregarious, settling on disturbed or previously cleared substrates, especially manufactured structures such as buoys and boats. It is a common fouler of boats, ships, buoys, and other manufactured structures (Woods Hole Oceanographic Institution 1952; Newman and McConnaughey 1987; Kerckhof and Cattrijsse 2001). In Itapocoroy Bay, Brazil, it is an abundant fouler of aquaculture ropes and floats used in oyster and mussel culture (Severino and Resgalla 2005). It also frequently grows on mollusk shells (e.g., Pseudochama corrugata, Ross 1962; 'mussels', Young 1994). Henry and McLaughlin (1986) list one specimen from a Humpback Whale (Megaptera novaeangliae).

The temperature range of this species is difficult to infer from its known occurrences. It occurred near San Diego, California during an El Niño year in 1985, and then in small numbers after that (three specimens, Newman and McConnaughey 1987), and failed to survive winter conditions in Louisiana (Perreault 2004) but has survived several winters on coastal buoys in Belgium (Kerckhof and Cattrijsse 2001; Kerckhof, personal communication). In Itapocoroy Bay, Brazil, it reproduces year-round at a temperature range of 17–-30ºC (Severino and Resgalla 2005).

Megabalanus coccopoma is currently rare in US waters. However, within its native range, from Mexico to Peru, it is common fouler of boats, ships, buoys, and other manufactured structures (Woods Hole Oceanographic Institution 1953; Newman and McConnaughey 1987; Kerckhof and Cattrijsse 2001).

Fisheries- In Itapocoroy Bay, Brazil, it is an abundant fouler of aquaculture ropes and floats used in oyster and mussel culture (Severno and Resgalla 2005).

The ecological impacts of this barnacle’s invasion in Brazil have not been carefully studied. However, it appears to have largely replaced populations of?M. tintinnabulum, reported in the 1920s–1940s (Young 1994). In experiments in Mosquito Lagoon, Florida,?Megabalanus coccopoma located on fouling plates reduced the settlement of larvae of Eastern Oyster (Crassostrea virginica) but did not affect the growth of oyster spat (Yuan et al. 2016).

Yamaguchi, Toshiyuki and 10 authors (2009) The introduction to Japan of the Titan barnacle, Megabalanus coccopoma (Darwin, 1854) (Cirripedia: Balanomorpha) and the role of shipping in its translocation., Biofouling 25(4): 325-333