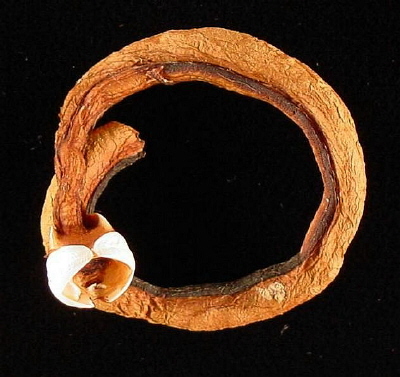 Teredo furcifera is commonly known as the Deep-Cleft Shipworm. Shipworms are highly modified mollusks adapted for boring into wood. It was first described from Indonesia in 1894 and has been collected in tropical regions around the world. Introduced specimens have been collected on the East and West Coasts of North America but are not established. This species is known from fixed wooden structures, panels, driftwood, and mangroves in tropical and subtropical climates, and from heated power plant effluents in temperate estuaries. It is one of many shipworm species contributing to the rapid riddling of wood in tropical and subtropical waters. Its impacts in these warm waters are difficult to assess; however, in some areas it has caused extensive damage to wooden marine infrastructure.

The tropical shipworm Teredo furcifera was described from Indonesia in 1894 and is now cosmopolitan (Turner 1966; Turner 1971). In the marine borer surveys, done for the U.S. Navy by the W. F. Clapp laboratories, T. furcifera (including synonyms) was reported from Japan, Philippines, Guam, Hawaii, the Panama Canal Zone, Cuba, Trinidad, Puerto Rico, Virgin Islands, Florida, and Bermuda (Wallour 1960). It has been collected around the world in tropical regions (Karande 1966; Rayner 1979; Tsunoda 1979; Nair 1984; Singh and Sasekumar 1994; Barreto et al. 2000). A few specimens were collected in Port Hueneme California, and the Gulf of California (Museum of Comparative Zoology 2009).

On the East Coast, this shipworm was collected from Wilmington, North Carolina, in 1941 (Museum of Comparative Zoology 2009), and was collected from the Atlantic and Gulf coasts from Fort Pierce, Florida to Corpus Christi, Texas (Wallour 1960). It was not mentioned in an earlier shipworm survey (Brown 1953). We consider this shipworm to be cryptogenic in the subtropical Northwest Atlantic (Carlton and Ruckelshaus 1997). Florida occurrences included Key West, Tampa, Panama City, Miami, and Fort Pierce (Wallour 1960).

North of Cape Hatteras,T. furcifera has been introduced presumably by wooden vessels, but has not become established. This shipworm was collected in 1963 from the wooden sailing ship 'Bounty II', built for the remake of the movie 'Mutiny on the Bounty' which had been docked over the winter in Oyster Bay Long Island, New York, following a long voyage (2 years) from Tahiti. The worm tubes were filled with larval shells, indicating that larvae had been brooded but not released (Turner 1966). Teredo furcifera was seen again in Barnegat Bay in 1974, following the start-up of the Oyster Creek Nuclear Power Plant in 1969. It was the most abundant shipworm in panels in Oyster Creek NJ in July–August of 1974. However, it became scarce in later years, and was not found in 1979 (Hoagland and Turner 1980). Further south,T. furcifera was collected in 1988 and 1989 in pine planks exposed to seawater at Wachapreague VA, at the mouth of Burtons Bay on the Atlantic Coast (McGovern and Burreson 1990). Identifications were made in Ruth Turner's laboratory at Harvard University (Burreson 1998, personal communication). This shipworm was not found north of Florida in previous surveys (Wallour 1960).

Teredo furcifera was described from the Indonesia (von Martens, 1894, cited by Turner 1966); it is widely distributed in the Indo-West Pacific and the tropical and subtropical Atlantic, but its native region is unknown (Wallour 1960; Turner 1966). It is mostly unreported or not established from the Pacific coast of the Americas, but was abundant at Salinas and Manta, and rare at Esmeraldas on the coast of Ecuador. It was common to abundant on the four types of wood tested (Cruz 1989).

Teredo furcifera belongs to the family Teredinidae (shipworms) which are highly modified mollusks, hardly recognizable as bivalves, adapted for boring into wood. The shell is reduced to two small, ridged valves covering the head and is used for grinding and tearing wood fibers. The body is naked and elongated and ends with two siphons, protected by elaborate calcareous structures called pallets (Turner 1966).

In T. furcifera, the shell resembles that of the Naval Shipworm (T. navalis). The pallets have a long stalk, with a moderately long blade, and a transverse ridge at the widest point. The calcareous portion extends to the tip of the blade. The outer face is deeply excavated, forming a U-V shaped cleft. The inner surface is more shallowly excavated and is deeply excavated at the tip, forming a U-shape. The periostracum is light golden to dark brown, and often extends below the transverse ridge. The inside of the cup is white (Turner 1966; Turner 1971). While T. furcifera resembles T. navalis, it differs by brooding its larvae in its gills until the pediveliger stage (240–280μm), while T. navalis releases them much earlier, at the smaller straight-hinge stage (70–90μm, Turner and Johnson 1971; Hoagland and Turner 1980). Adult T. furcifera can reach at least 142 mm in length but can produce larvae at sizes as small as 15 mm (Hoagland and Turner 1980).

Potentially misidentified species—The diversity of shipworms in tropical waters is very great. Many are now widely distributed in the Atlantic, Pacific, and Indian Oceans, largely because of shipping. The species listed below have been reported in Florida, the Caribbean, West Coast, or Hawaiian waters.

Shipworms dig long burrows in submerged wood in marine environments. They burrow by rocking and abrading the wood fibers. The mantle covers most of the length of their body and secrete a calcareous lining along the interior of the burrow. They normally have their anterior end with head and shells inside the burrow, and their siphons protruding outwards. The pallets plug the burrow when the siphons are retracted (Barnes 1983).

Shipworms are protandrous hermaphrodites, beginning life as male and transforming to female, but they have no capacity for self-fertilization. Males release sperm into the water column, which fertilizes eggs for the female. The fertilized eggs are then brooded in the gills. Larvae are retained in the gills to the veliger stage (Hoagland 1986a; Richards et al. 1984). Adult Teredo furcifera can reach at least 142 mm in length, but can produce larvae at sizes as small as 15 mm (Hoagland and Turner 1980). A female may retain 7,000 or more larvae in a single brood (Karande and Pensey, cited by Richards 1984). The larvae of T. furcifera are planktonic for about 3 days. They settle in the pediveliger stage, and then rapidly metamorphose and begin boring into wood within 4 days. They quickly develop a calcified shell, pallets, and burrow lining (Turner and Johnson 1971). Shipworms may obtain some (or most, Paalvast and van der Velde 2013) of their nutrition from plankton, but some comes from wood, which consists largely of cellulose. Symbiotic bacteria fix nitrogen, essential for protein synthesis (Turner and Johnson 1971; Barnes 1983).

Teredo furcifera is known from fixed wood structures, panels, driftwood, and mangroves in tropical and subtropical climates, and from heated power plant effluents in temperate estuaries (Wallour 1960; Hoagland and Turner 1980; Ibrahim 1981; Hoagland 1983; Singh and Sasekumar 1994). Teredo furcifera is sensitive to low temperatures. They appeared briefly from 1974 to 1977, in a portion of Barnegat Bay, New Jersey subjected to effluents from a nuclear power plant (Hoagland and Turner 1980), but otherwise appear to occur only sporadically in temperate waters (Wallour 1960; Turner 1966; Tsunoda 1979; McGovern and Burreson 1990). Adult T. furcifera can tolerate salinities as low as 6 PSU (Rayner 1979; Baretto et al. 2000) but also can occur in the Red Sea (~40 PSU, Turner 1966).

Teredo furcifera is one of many shipworms contributing to the rapid riddling of wood in tropical and subtropical waters. Its impacts in these warm waters are difficult to assess, because of the diversity of the shipworm community. However, in the temperate waters of New Jersey, where it was restricted to areas warmed by thermal effluents, it reached high abundance and caused extensive damage to marinas near the Oyster Creek Nuclear Power Plant in Barnegat Bay (Turner 1973; Hoagland and Turner 1980).

McGovern, Elizabeth R.; Burreson, Eugene M. (1990) Ultrastructure of Minchinia sp. spores from shipworms (Teredo sp.) in the western North Atlantic, with discussion of taxonomy of the Haplosporidiidae, Journal of Protozoology 37(3): 212-218

Nair, N. Balakrishnan (1984) The problem of marine timber destroying organisms along the Indian coast, Proceedings of the Indian Academy of Sciences 93(3): 203-223

Rai Singh, Harinder Sasekumar, A. (1994) Distribution and abundance of marine wood borers on the west coast of Peninsular Malaysia., Hydrobiologia 285: 111-121

Rayner, Suzanne M (1979) Comparison of the salinity range tolerated by Teredinids (Mollusca: Teredinidae) under controlled conditions with that observed in an estuary in Papua New Guinea., Australian Journal of Marine and Freshwater Research 30: 521-533