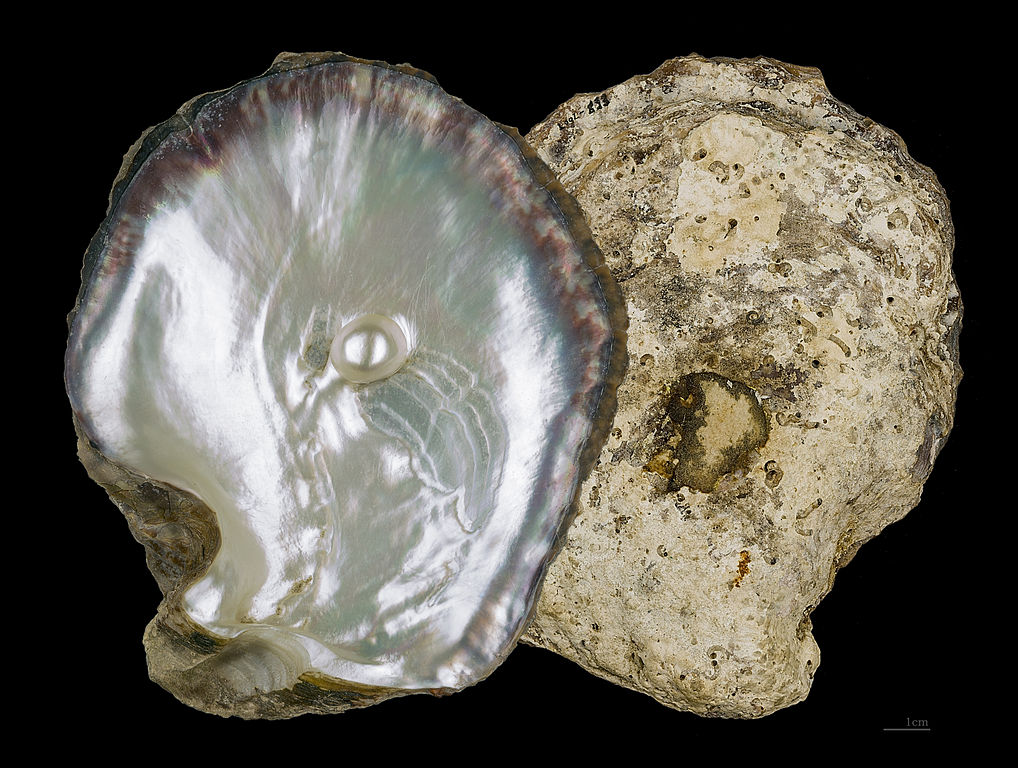 Pinctada margaritifera is commonly known as the Black-Lipped Pearl Oyster. It has a broad native distribution in the Indo-Pacific, from the Red Sea and Madagascar to southern Japan, Hawaii, northern Australia, and the Line and Pitcairn Islands. It also occurs on the tropical Pacific coast of North and South America, from Baja California to Peru. This oyster is widely cultivated and harvested for its pearls, so it is possible that its Indo-Pacific range has been extended by humans. Introduced P. margaritifera have been found in Egypt and off of southern Florida and the Bahamas. In its native habitat, this oyster is widespread on tropical rocky shores, lagoons and coral reefs. It appears to be limited to warm, high-salinity environments. No economic or ecological impacts have been reported from its invaded range.

* Beyond its native range, this species is not currently established in North American waters.

Image Credit: Museum of Toulouse via Wikimedia Commons and the CC BY-SA 3.0 license

Pinctada margaritifera has a broad native distribution in the Indo-Pacific, spanning from the Red Sea and Madagascar to southern Japan, Hawaii, northern Australia, and the Line and Pitcairn Islands (Zenetos et al. 2003; Florida Museum of Natural History 2009; Museum of Comparative Zoology 2009; US National Museum of Natural History 2009). It also occurs on the tropical Pacific coast of North and South America, from Baja California to Peru, where it was known by the synonym P. mazatlanica (Tëmkin 2010). This oyster is widely cultivated and harvested for its pearls, so it is possible that its Indo-Pacific range has been extended by humans. This mussel was introduced to Calabria, Italy, around 1860 for pearl-culture, but did not persist (Zenetos et al. 2003). In the 1970s, a population was found to be established near Alexandria, Egypt (Hasan 1974, cited by Zenetos et al. 2003). In 1990, and in subsequent years, a few specimens of P. margaritifera were found off southern Florida and in the Bahamas (Carlton and Ruckelshaus 1997; Frank, in Lee 2003, http://www.jaxshells.org/910.htm; Florida Museum of Natural History 2009), but there is no evidence of establishment.

In 1990, P. margaritifera was collected 80 km off Boca Raton, Florida (FL) in the Atlantic Ocean (Carlton and Ruckelshaus 1997). Another collection occurred off Boynton Beach, FL in deep sublittoral waters on coral reefs (1994, Carlton and Ruckelshaus 1997). There have been at least three additional specimens collected off the south Florida Coast (Frank, in Lee 2003, http://www.jaxshells.org/910.htm). The Florida Museum of Natural History has an undated specimen (FLMNH 18933) from off of Key West, and another (FLMNH 14911) from New Providence Island in the Bahamas (Florida Museum of Natural History 2009). However, there is no evidence of reproduction. Ballast water and vessel hull fouling are the most likely vectors of introduction.

An early attempt (~1860) was made to introduce P. margaritifera to Calabria, Italy. These animals are reported to have reproduced, and produced pearls, but did not persist (Zenetos et al. 2003). An established population was found before 1974 in Abou-Kir Bay, Alexandria, Egypt (Mediterranean) (Hasan 1974, cited by Zenetos et al. 2003). References to an introduction in Greece involve a misidentification of P. imbricata radiata (Serbetis 1963, cited by Zenetos 2003).

Pinctada margaritifera has a large shell, with the two valves almost equal. They are mostly circular but asymmetrical, between the anterior and posterior halves, with the dorsal edge straightened. The beaks are located toward the anterior end, with a triangular projection near the hinge. The shell is roughly sculptured with concentric ridges, and radial ridges. The hinge lacks teeth, and the ligament is in a single, triangular depression. The shell is externally colored grayish green with white or yellowish radial rows of scales, and brown to black margins. The inside of the shell is pearly with a pale blue or violet cast. The shell reaches 200-250 mm in height. Larvae have been described by Doroudi and Southgate (2003). The veligers settle at a size of 230-266 µm. (Description from: International Commission for the Scientific Exploration of the Mediterranean Sea 2001-2011, Zenetos et al. 2003).

Pinctada margaritifera is a protandric hermaphrodite, changing from male to female as it grows. Females start to appear at about 20 mm diameter, varying with habitat, and dominate size classes above 30-60 mm (Kimani and Mavuti 2002). Eggs are released into the water column, and when fertilized, develop into a trochophore larva, and within 24 hours, a veliger. The veligers remain in the plankton for 20-23 days before settling at a size of 230-266 µm (Doroudi and Southgate 2003).

This oyster is widespread on tropical rocky shores, lagoons and coral reefs, often in surge channels between reefs and reef edges. It appears to be limited to warm, high-salinity environments (Kimani and Mavuti 2002; Zenetos et al. 2003; Academy of Natural Sciences of Philadelphia 2010; US National Museum of Natural History 2010).

Pinctada margaritifera is highly prized for its pearls and nacre (pearly shell material), and supports extensive pearl fisheries and aquaculture in the Indo-Pacific (Zenetos et al. 2003). However, it has no reported economic or ecological impacts outside its native range.